New developments in wearable technology, virtual reality, and augment reality research are poised to change everything from healthcare to gaming. We recently asked Professor Bruce Thomas to tell us about the research in these areas taking place at the Wearable Computer lab at the University of South Australia. 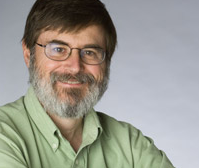 Professor Bruce Thomas is the Director of the Wearable Computer Lab at the University of South Australia.

CIRCUIT CELLAR: In 1997, Carnegie Mellon, Georgia Tech, and MIT hosted the first IEEE International Symposium on Wearable Computers. How has research in the area changed since the late 1990s?

BRUCE: I remember the 1997 conference well. We presented one of our first wearable computer papers there. Some differences are: People do not build their own wearable computers anymore. Back then you had to hack your own system. Today you buy a smartphone and you have all the computing power you need.  We now use Mac minis, and this replaces about five or six components when we started. The research now is very focused on contextual aware computing. In 1997 the focus was on all disciplines of computer science. There is less work on garment integrated systems today. A large advantage is there are many computing and wearable platforms to start with.

CIRCUIT CELLAR: How did the Wearable Computer Lab at the University of South Australia come into being in 1998?

BRUCE: Someone in the Australian Defense Science and Technology Organization (a defense lab) showed me two Phoenix 486 belt mounted wearable computers with Private Eye head-mounted displays (HMDs). He told me this was the next big thing for defense, and he asked how I can help him out with some research. He wanted to use the new Sony Glasstron see-through displays. The first thing I thought of was, “This would be great for outdoor augmented reality.” 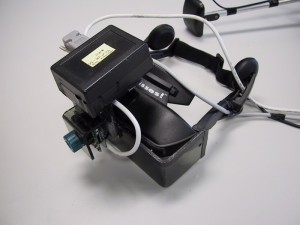 The ARQuake system is an interactive outdoor augmented reality collaboration system that enables users to walk around in the real world while playing the computer game Quake. The system requires a head-mounted display. (Image used with permission from Bruce H. Thomas, Wearable Computer Lab, University of South Australia)

CIRCUIT CELLAR: You supervised Wayne Piekarski’s Tinminth augmented reality backpack project, which started in the late 1990s. Can you give us a brief overview of the project and how it evolved from 1998 to 2006?

BRUCE: The project went from a fixed frame for a backpack used in bush walking loaded with many devices to a belt-mounted system with just the Mac mini modified and a helmet (with many sensors and HMD). I wanted to port this onto a smartphone, but we never got there. The project had many different software architectures. The system was a research platform to support outdoor augmented reality user interaction research. The system was very flexible and robust.

CIRCUIT CELLAR: Which of the Lab’s current projects most interests you at this time?

BRUCE: We are interested in portable haptic devices. Dr. Ross Smith is leading the research effort into this. This involves layered jamming placed in a mitten to provide mobile haptic sensations to the user. This was presented at the International Symposium on Wearable Computing in 2014. We are continuing this work. 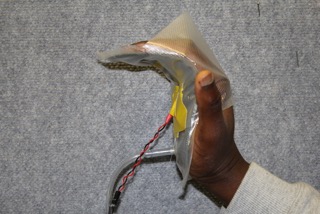 CIRCUIT CELLAR: Can you tell us about your most current project or projects at the Lab?

BRUCE: We have moved into large-scale projector-based augmented reality.  We are looking into tools to support designers of large spaces, but command and control rooms. We are about to start a seven year project working with Jumbo Vision International with the Innovative Manufacturing CRC.

CIRCUIT CELLAR: In an April 2015 TechTimes.com article, “Augmented Reality vs. Virtual Reality,” Vamien McKalin writes: “It is clear that the way things are right now, AR has the upper hand against VR, and that might not be changing anytime soon.” Do you agree?

BRUCE: It all comes down to who wins the head-mounted display wars. I think both will be winners in the near future. They solve different problems and have different uses. I can see a VR HMD attached to many games controllers, and I can see people using AR displays in their workplace. 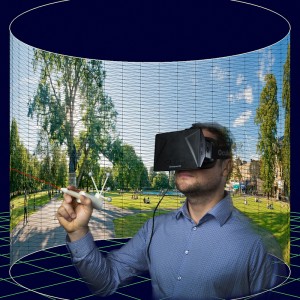 CIRCUIT CELLAR: When you think about the short term (5 to 10 years), in which area do you think wearable technology will make the biggest impact: consumer, healthcare, military, or enterprise?

BRUCE: In 5 to 10 years, I think the biggest impact will be in healthcare. Wearables will go beyond fitness monitoring to health monitoring. This will enable better monitor of health issues and provide doctors much more diagnostics to help people. A second area is extending the ability for elderly people to stay in their homes. Better health monitoring and activity monitoring will allow people to safely stay at home longer.