NAN: Tell us about your computer game company, One Girl, One Laptop Productions. How did the company begin? 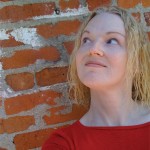 QUINN: I had been in the AAA games industry for most of my career. I’ve been making games in my spare time since I was six years old, but the “actually-getting-paid-for-it” time started in the 1990s with the Nintendo 64.

I’ve written games on everything from the Apple II to the Playstation 3. I worked at various companies including Bungie Studios and 3DO.

My longest stint was eight good years at a small studio called Pandemic in Los Angeles, CA. In 2009, the company was in financial trouble and was sold to Electronic Arts with the intention it would keep it going. Electronic Arts opted to close the studio down shortly thereafter. We got some severance with our walking papers, and I decided to spin that money into One Girl, One Laptop Productions

This was just at the tail end of the initial gold rush on Apple’s iOS platform, and it still seemed like there was money to be made there. Unfortunately, there was subsequently a mad rush to the bottom on pricing for iPhone games. Before I could establish a presence, the space got very crowded almost overnight. Low-volume, high-quality indie games became financially unviable (though I think they’re coming back now). I still do independent game development on the side, but my primary business now is consulting and hired-gun engineering for other companies needing mobile or embedded applications. 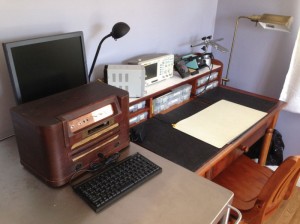 Quinn has two workspaces. She uses this one for the “small clean stuff.” 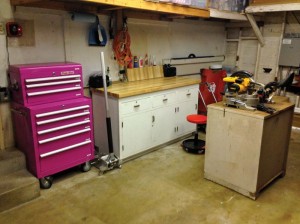 Quinn’s other workspace is used for the “big dirty stuff.”

NAN: Describe some of the software One Girl, One Laptop Productions develops. Do you have a favorite?

QUINN: As much as I love games, my true love is engineering itself. My favorite projects always end up being the ones with the most complex challenges. I don’t think I could pick just one.

A good recent example is the Olloclip, which is a combination photography app and lens attachment for the iPhone. The main killer feature is real-time barrel distortion correction that made for some very interesting development challenges.

Much like game consoles, working on mobile devices is often about taking a well-understood algorithm and making it work on a platform so small that nobody thinks it will be possible. On AAA games, I used to try and build complex artificial intelligence (AI) systems that ran in 3 ms of frame time. Now I’m trying to cram gigabyte-scale image processing systems into devices with little memory, minimal graphics processing units (GPUs), and slow CPUs. They are similar challenges with completely different contexts. Some days it feels like you’re trying to model high-energy particle physics on a washing machine, but it’s a great when you finally do solve a problem like that. It’s the engineering of the thing that’s exciting, whatever that thing is this week.

Another favorite has been the ICEdot project. It’s a health and safety sensor system that works with your mobile device and is targeted at athletes and coaches. It’s a fun mix of mobile and embedded systems development and it has pushed my skill set into a number of new areas—in particular, Bluetooth Low Energy (BLE), which is an exciting new technology. ICEdot is on the bleeding edge of that, and it’s been a big challenge to use it in the real world.

NAN: What types of projects did you work on while you were a Senior Engineer at Pandemic Studios?

QUINN: I started my tenure there on a squad tactics training simulator Pandemic was building for Simulation, Training, and Instrumentation Command (STRICOM), an experimental technology branch of the US Army. It’s a long story, but that simulator was later spun into a series of Xbox games called Full Spectrum Warrior.

The biggest project I worked on was an open-world game set in World War II called Saboteur. Unlike the usual shooter format the WWII genre is littered with, this was a third-person action-adventure game with a noir art style. Saboteur was a hugely ambitious project, and the awesome team there solved some very big challenges. We did things with physics, rendering, AI, clambering, animation, toolchains, content streaming, and game design that no game had done before. As so often happens with AAA games, the marketing budget was pulled at the last moment, so you can add it to the long list of “Greatest Games That Nobody Played.”

NAN: Your blog-style website BlondiHacks features hacking projects involving everything from development boards to two-layer PCB etching. Tell us about the types of projects you enjoy hacking.

QUINN: BlondiHacks is my outlet for whatever whim that comes to mind as far as hacking. I think hacking is more than a hobby—it’s kind of a way of life. It’s about shaping your environment to be what you think it should be. It’s about saving things from landfills and giving new life to forgotten or underappreciated artifacts. It’s part creativity, part environmentalism, part self-reliance, and all good times.

It’s fun to talk about stuff you’re doing, but most of my flights of fancy are so obscure or odd that only a select few would find them interesting. The power of the Internet is that it connects all of us oddballs to each other. Hence, BlondiHacks.

QUINN: I don’t recall a time when I wasn’t interested, honestly, so that transition must have occurred before my brain was retaining memories. What age is that? Three? Four?
I may have been born with a multimeter in my hand (though my mom would probably have noted that in the medical report). My mom likes to say, the day they brought the Apple II into the house (when I was around age five) I crawled up on the stool and haven’t moved since. 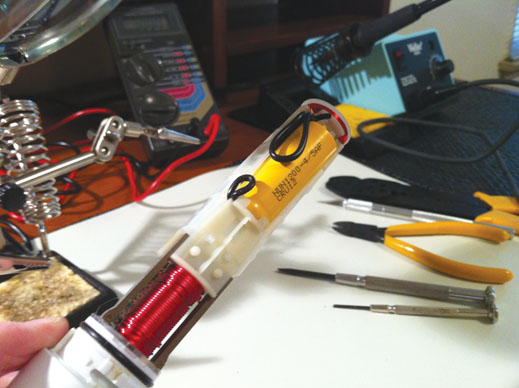 To prolong her toothbrush’s life, Quinn replaced a toothbrush battery with a nickel–cadmium battery and added wires to the old battery’s PCB mount points.

NAN: What was your first project?

QUINN: That’s difficult to say, since my life is a series of endless overlapping projects. As soon as I was old enough to hold a soldering iron, I built a lot of things from the seminal Forrest Mims book RadioShack sold. You know the one: Getting Started in Electronics.
That book was my bible for many years. I remember hacking a remote-control truck to have headlights and speed control. I remember building a working guillotine for a school project about the French Revolution. It was 4’ tall and genuinely dangerous. I carried it on the bus and demonstrated it on bourgeoisie bananas in class. I don’t imagine kids would get away with that today.

More recently, my interest in hacking was probably rekindled with the simple act of replacing the “non-user-serviceable” battery in a very expensive toothbrush (see “Toothbrush Repair”). That was five years ago, and I’m still using that toothbrush today. To me, that’s the purest essence of hacking right there—fixing the one weakness in a product that would have otherwise halved its useful life. 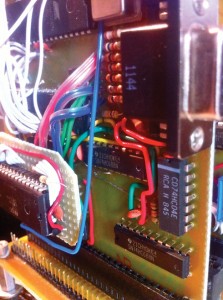 Quinn’s homebrew computer, Veronica, includes a clock circuit and a CPU. The breadboard is shown.

QUINN: My biggest hobby project recently has been my homebrew computer, Veronica (see “Veronica”). The Apple II I mentioned was very formative for me, and [Apple Computer founder] Steve Wozniak was a bit of a hero figure. My whole life, I wanted to know how one person could just sit down and create something like that.

A couple of years ago, with no formal training in electrical engineering, I decided to see if I could do it. Veronica is the result, and it was the fulfillment of a lifelong goal to build a functioning, usable, 8-bit computer from scratch, complete with video graphics array (VGA) bitmapped video, a keyboard, game controllers, and built-in Pong.

Today, my most active project is repairing, restoring, and modifying an early 1990s Bally/Williams pinball machine called Johnny Mnemonic (see “Johnny”). Anyone who likes hacking should be into pinball machines. They are wonderlands of mechanical systems, electronics, software, and game theory all rolled into one. They are also bottomless pits of hacking and tinkering potential (not to mention money pits and time sinks).

Another big ongoing project is our 24 Hours of LeMons race team. The short version is that it’s a (very) low-budget form of endurance auto racing that involves a whole lot of hacking of all kinds. That’s probably an entire interview unto itself, but I feel I should at least mention it, since it’s such a big part of my hacking time. 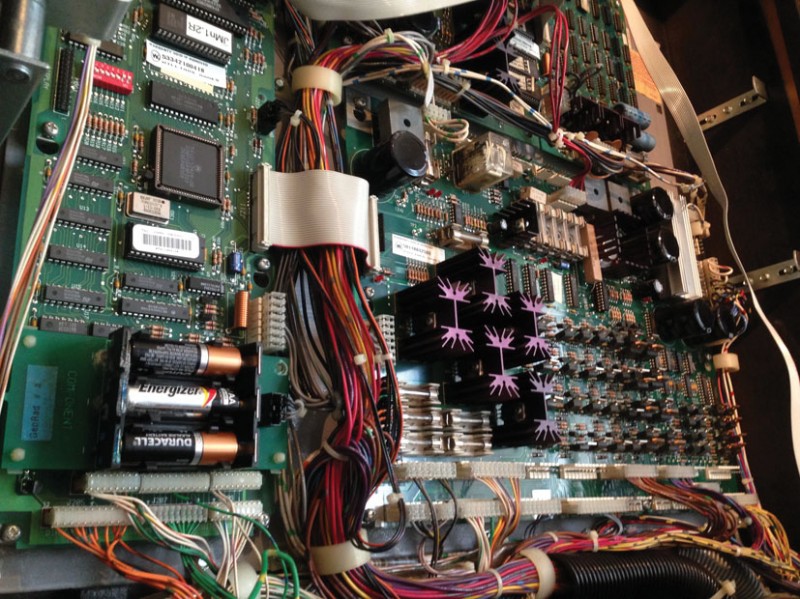 Quinn is in the process of hacking a Bally/Williams Johnny Mnemonic pinball machine. This photo shows the machine’s circuitry.

QUINN: One “big idea“ that has been put forward that I’m excited about is the notion of hackerspaces replacing public libraries. The Internet is gradually replacing the role of pure information access that libraries have served. It has been suggested that access to high-end technology creation tools is the next such area where playing field leveling is required. Anyone wanting to improve their station in life by executing their ideas in a high-tech world will need access to CNC machines, 3-D printers, machine tools, high-end computer-aided design (CAD), video production software, and so forth.

Libraries are generally well located and already equipped with things such as fire exits, sprinkler systems, and commercial-grade electrical. Converting some libraries into hackerspaces sounds to me like a terrific use of public funds. It’s a bit “pie in the sky,” but places like Edmonton in Alberta, Canada, and North Logan, UT, are already experimenting with the idea. This is like hacking democracy itself, and I love it.