Chris Zeh is a San Jose, CA-based hardware design engineer who enjoys working with FPGA development boards, application-specific integrated circuits, and logic analyzers. He recently told us about the projects he is involved with at STMicroelectronics and explained what he’s working on in his free time.

CIRCUIT CELLAR: Tell us about Idle-Logic.com. Why and when did you decide to start a blog?

CHRIS: I started blogging in the winter of 2009, a little more than a year after I graduated Colorado State University with a BSEE. I realized that after graduating it was important to continue working on various projects to keep my mind and skills sharp. I figured the best way to chronicle and show off my projects was to start a blog—my little corner of the Internet.

CIRCUIT CELLAR: What types of projects do you feature on your site?

CHRIS: I like working on a wide range of different types of projects, varying from software development to digital and analog design. I’ve found that most of my projects highlighted on Idle-Logic.com have been ones focusing on FPGAs. I find these little reprogrammable, multipurpose ICs both immensely powerful and fascinating to work with.

My initial plan for the blog was to start a development project to create an FPGA equivalent to the Arduino. I wanted to build a main board with all the basic hardware to run an Altera Cyclone II FPGA and then create add-on PCBs with various sensors and interfaces. My main FPGA board was to be named the Saturn board, and the subsequent add-on “wings” were to be named after the various moons of Saturn. 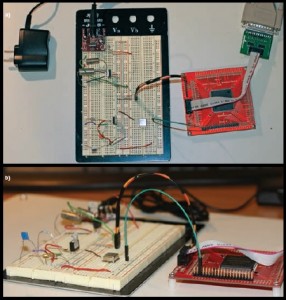 a—Chris’s Saturn board prototype includes an Altera Cyclone II FPGA and JTAG FPGA programmer, two linear regulators, a 5-V breadboard power supply, and a 24-MHz clock. b—A side view of the board

The project proceeded nicely. I spent some time brushing up on my Photoshop skills to put together a logo and came up with a minimized BOM solution to provide power to the nine different voltage supplies, both linear regulators and switched-mode supplies. One aspect of FPGAs that can make them costly for hobbyist is that the programming JTAG cable was on the order of $300. Fortunately, there are a few more affordable off-brand versions, which I used at first. After many weeks of work, I finally had the total solution for the main FPGA board. The total cost of the prototype system was about $150. Eventually I came up with a way to bit bang the FPGA’s programming bitstream using a simple $15 USB-to-UART IC breakout board driven by a tiny Python application, eliminating the need for the pricey cable. This Future Technology Devices International FT232RL USB-to-UART IC also provided a clock output enabling me to further reduce the component count.

The project was a success in that I was compelled to completely digest the FPGA’s 470-page handbook, giving me a solid grasp of how to work with FPGAs such as the Cyclone II. The project was a failure in that the FPGA breakout board I wanted to use for the project was discontinued by the manufacturer. Creating and fabricating my own four-layer board and hand soldering the 208-pin package was both prohibitively expensive and also a little daunting.

Fortunately, at that time Terasic Technologies introduced its DE0-Nano, a $79 commercial, $59 academic, feature-packed FPGA evaluation board. The board comes with two 40-pin general I/O plus power headers, which has become a perfect alternative base platform for FPGA development. I now intend to develop add-on “wings” to work with this evaluation board.

CIRCUIT CELLAR: Tell us more about how you’ve been using Terasic Technologies’s DE0-Nano development and education board.

CHRIS: The main project I’ve been working on lately with the DE0-Nano is creating and adding support for a full-color 4.3” (480 × 272 pixel) thin- film transistor (TFT) touchscreen LCD. Because of the large pin count available and reconfigurable logic, the DE0-Nano can easily support the display. I used a Waveshare Electronics $20 display, which includes a 40-pin header that is almost but not quite compatible with the DE0-Nano’s 40-pin header. Using a 40-pin IDC gray cable, I was able to do some creative rewiring (cutting and swapping eight or so pins) to enable the two to mate with minimal effort. Eventually, once all the features are tested, I’ll fabricate a PCB in place of the cable.

There are many libraries available to drive the display, but for this project I want to develop the hardware accelerators and video pipeline from the ground up, purely though digital logic in the FPGA. I recently picked up an SD card breakout board and a small camera breakout board. Using these I would like to start playing around with image processing and object recognition algorithms.

CIRCUIT CELLAR: What do you do at STMicroelectronics and what types of projects are you working on?

CHRIS: My official title is Senior Hardware Design Engineer. This title mainly comes thanks to the first project I worked on for the company, which is ongoing—an FPGA-based serial port capture and decoding tool named the HyperSniffer. However, my main role is that of an application engineer.

I spend most of my time testing and debugging our prototype mixed-signal ASICs prior to mass production. These ASICs are built for the hard disk drive industry. They provide several switch-mode power supplies, linear regulators, brushless DC motor controllers, voice coil motor actuation, and a shock sensor digital processing chain, along with the various DACs, ADCs, and monitoring circuits all integrated into a single IC.

Our ASIC’s huge feature set requires me to stay sharp on a wide variety of topics, both analog and digital. A typical day has me down in the lab writing scripts in Python or Visual Studio, creating stimuli, and taking measurements using my 1-GHz, 10-GSPS LeCroy WavePro 7100A oscilloscope, several 6.5-digit multimeters, dynamic signal analyzers, and noise injection power supplies among other instruments. I work closely with our international design team and our customers to help discover and document bugs and streamline the system integration.

A few years back I was able to join my colleagues in writing “Power Electronics Control to Reduce Hard Disk Drive Acoustics Pure Tones,” an Institute of Electrical and Electronics Engineers (IEEE) paper published for the Control and Modeling for Power Electronics (COMPEL) 2010 conference. I presented the paper, poster, and demonstration at the conference discussing a novel technique to reduce acoustic noise generated by a spindle motor.

Chris designed the HyperSniffer logic analyzer, which is shown with the HyperDrive main board. (The PCB was designed by Vincent
Himpe and Albino Miglialo.)

CIRCUIT CELLAR: Tell us more about the HyperSniffer project.

CHRIS: The HyperSniffer project is an FPGA- based digital design project I first created right out of college. (My colleagues Vincent Himpe and Albino Miglialo did the board design and layout.) The tool is basically an application-specific logic analyzer. It enables us to help our customers troubleshoot problems that arise from serial port transmissions between their system-on-a-chip (SoC) and our ASIC. Through various triggering options it can collect and decode the two or three wire data transmissions, store them on on- board memory, and wait for retrieval and further processing by the application running on the PC. One of this tool’s nice features is that it is capable of synchronizing and communicating with an oscilloscope, enabling us to track down problems that happen in the analog domain that arise due to commands sent digitally.

You can read the entire interview in Circuit Cellar 290 (September 2014).