Chris Paiano is an Elko, NV-based problem engineer. His father introduced him to programming at an early age, and Chris has continued to team with his father to write software and firmware for some of his hardware designs. Chris has written dozens of unique application notes for the Cypress Semiconductor Programmable-System-on-Chip (PSoC) chipset. He is currently using PSoC in an innovative household project and dreams of finishing his concept for environmentally friendly electric/hybrid vehicle wheeldrive retrofit kits. 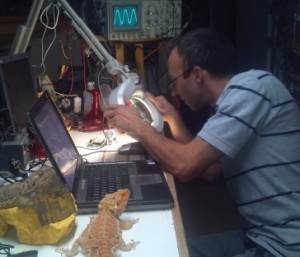 You can read the complete interview in Circuit Cellar 272 March 2013.

NAN PRICE: Tell us a little about your background.

CHRIS PAIANO: I went to school in Orlando, FL, all the way through college at the University of Central Florida, where I obtained my bachelor’s degree in Computer Engineering.

I started at a very young age. My father always had an electronics workbench and I spent time there when I could. When I was 2 years old, he brought me home an Apple ][ with some floppy disks and told me there were games to be played—if I could only figure out how to make them work.

The Apple ][ was not the most user-friendly or intuitive computer system, by any means. In order to accomplish my important goal of playing video games, I had to learn how to work with the computer’s clunky command-line interface (CLI). Once I figured out how to make all the games work, I wanted to fully automate them so I didn’t have to go through all the manual steps to play them every time (also, so my friends could start them up without me). So, I spent much time developing automatic start-up scripts, from the Applesoft HELLO program to MS-DOS configuration start-up menus, supporting whatever memory management method was required to play certain games, along with icon-driven pre-Windows menu systems that made these early systems usable by my friends, family, and clients.

This evolved into more elaborate scripting and programming to fill the gaps where the tools I needed did not exist, so I had to create them. My possibilities really opened up when I began developing firmware to complement my father’s hardware designs.

NAN: Tell us about your company, Christopher Paiano Engineering (CpE).

CHRIS: I design and program prototypes for various clients. I provide them with ideas at various development stages, which I turn into something that they can mass produce. I’ve just redesigned my website (www.cpeproto.com), by the way. It has a sleeker, simple interface and is easier to navigate now. No more Java menu with annoying sound effects!

NAN: Several of your projects are built around the Cypress Semiconductor programmable system-on-chip (PSoC). Is that your go-to chipset?

CHRIS: Yes, mainly because of how versatile and capable it is. It seems to be sufficient to take care of most any embedded task or set of tasks that come to mind.

For example, recently, the proprietor of a local game/tech/arcade business approached me to build a custom, inexpensive door chime. He wanted customers to hear random, recognizable portal sounds from popular video games whenever customers entered or exited his shop.

I started with an inexpensive motion sensor product from a local superstore. I added a Cypress CY8C27443 PSoC, as I have several lying around for general projects. I made a copy of my “Playing WAV Files with a PSoC” app note project to modify.

I added code to randomly cycle through available sound clips in the memory and I was able to provide 1.9805 s of audio at 8 kHz with the 16 KB of RAM available in this chip. The client was happy with this. He settled on two portal sounds (from The Legend of Zelda and Super Mario Brothers) and the chime has been in use for several months now. Customer feedback has been excellent. Everyone entering the place immediately recognizes the sounds and loves it!

NAN: You’ve written more than 30 application notes for the Cypress chipset, including PongSoC and the Video RTA. Can you explain the process?

CHRIS: Sometimes Cypress would post bounties for app notes that they’d like to see written on a certain topic or capability. Other times, I’d have an interesting personal project for which I decided to utilize a PSoC. I would then decide it might make a good app note, so I’d write it up and submit it. Either way, I’d usually develop the project side-by-side with my father. (We make an excellent hardware/software team.) I work out whatever firmware and PC/smartphone apps may be necessary, and he builds the PSoC circuit board with which to test. Then, I document it all, arrange it, and edit it into an app note (or, in some cases, an article).

Sometimes a project is just too complex to squeeze into a single PSoC’s resources and the simplest solution is to just add another PSoC. Communication between PSoCs can be quick and easy to implement, so distributing tasks and maintaining synchronization is not too difficult. This was the solution for the video real-time analyzer (RTA) app note where, realistically, there were only enough internal analog resources to provide three filters in each PSoC. With the Video RTA, one just adds as many PSoCs to the bus as is necessary to achieve the desired analyzer resolution.

The PongSoC was a fun one! Once I learned it was possible to combine some internal PSoC modules and algorithms to generate a stable composite video signal, I immediately decided I wanted to try and utilize this new capability to recreate a Pong-like embedded game-on-a-chip. I could already generate sound effects and read potentiometers for paddle inputs, I just needed to work it all out. I had a great time doing so, testing it with friends and playing with the variables to tweak the gameplay, and so forth.

Additionally, all 40 of my PSoC application notes are now available in some capacity on my updated website, as Cypress does not actively market the older PSoC families that many of my projects utilized in the past. I get enough e-mail requests for source code and documentation from this collection, so I have just gone ahead and taken the time to restore as many as I could find from my archives to the new website.

NAN: Your two-part article series “PSoC Design Techniques” describes how to build an eight-channel mixer and how DSP effects and a user interface can be added to it (Circuit Cellar 216–217, 2008). Describe the design and why you chose this design concept.

CHRIS: This was a great challenge. In a chip that traditionally would only allow for four full audio pathways in the provided analog resources (four PGA modules utilizing the normal I/O paths provided by PSoC Designer), we managed to figure out a way to utilize the remaining switched-capacitor blocks to act as signal mixers and gain stages with enough live reconfigurable resources to add potentiometers to control volume for each channel. Since there was still plenty of code space, I went ahead and added some DSP effects (reverb and pitch shift) along with a voice menu and flash-settings memory.

I really wanted to showcase what efficient design and algorithms could accomplish in a single piece of silicon, and I’m quite pleased with the way this project turned out. I still use the resulting device on my workbench and in my setups. It comes in handy sometimes. I have not updated it at all. I’ve been using it as is and it is still available for purchase on my website for anyone interested in experimenting with one.

NAN: Are you currently working on or planning any microprocessor-based projects?

CHRIS: Currently, I’m working on a PSoC solution for my broken dishwasher. 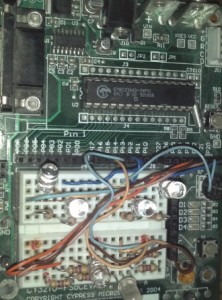 Chris Paiano is developing a PSoC solution for a broken dishwasher. In addition to the fix, he plans to make it smartphone-controllable.

The control module on this appliance has failed, so I am wiring it into a PSoC to make it work again as well as add some new capabilities (such as keeping a wash/rinse/door open log so it can tell when the dishes contained within it are clean or dirty, and adding a Bluetooth module so I can check the status and control/program the appliance from my smartphone).

This is the type of personal project I like to work on in my free time. It also might make a good app note or article in the future, as it involves an Android application and Bluetooth communication. It also increases my capabilities, if I have to figure out anything new. And that is always good.

I am almost ready to hook it up to the dishwasher, let it try running through the cycles, and hope I don’t flood my house in the process. Ah, the pure excitement of engineering!

The entire interview is available in Circuit Cellar 272 March 2013.