Guido Ottaviani designs and creates innovative microcontroller-based robot systems in the city from which remarkable innovations in science and art have originated for centuries. 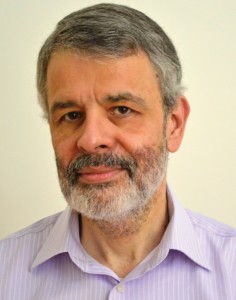 By day, the Rome-based designer is a technical manager for a large Italian editorial group. In his spare time he designs robots and interacts with various other “electronics addicts.” In an a candid interview published in Circuit Cellar 265 (August 2012), Guido described his fascination with robotics, his preferred microcontrollers, and some of his favorite design projects. Below is an abridged version of the interview.

NAN PRICE: What was the first MCU you worked with? Where were you at the time? Tell us about the project and what you learned.

GUIDO OTTAVIANI: The very first one was not technically an MCU, that was too early. It was in the mid 1980s. I worked on an 8085 CPU-based board with a lot of peripherals, clocked at 470 kHz (less than half a megahertz!) used for a radio set control panel. I was an analog circuits designer in a big electronics company, and I had started studying digital electronics on my own on a Bugbook series of self-instruction books, which were very expensive at that time. When the company needed an assembly programmer to work on this board, I said, “Don’t worry, I know the 8085 CPU very well.” Of course this was not true, but they never complained, because that job was done well and within the scheduled time.

I learned a lot about how to optimize CPU cycles on a slow processor. The program had very little time to switch off the receiver to avoid destroying it before the powerful transmitter started.

Flow charts on paper, a Motorola developing system with the program saved on an 8” floppy disk, a very primitive character-based editor, the program burned on an external EPROM and erased with a UV lamp. That was the environment! When, 20 years later, I started again with embedded programming for my hobby, using Microchip Technology’s MPLAB IDE (maybe still version 6.xx) and a Microchip Technology PIC16F84, it looked like paradise to me, even if I had to relearn almost everything.

But, what I’ve learned about code optimization—both for speed and size—is still useful even when I program the many resources on the dsPIC33F series…

NAN: You worked in the field of analog and digital development for several years. Tell us a bit about your background and experiences.

GUIDO: Let me talk about my first day of work, exactly 31 years ago.

Being a radio amateur and electronics fan, I went often to the surplus stores to find some useful components and devices, or just to touch the wonderful receivers or instruments: Bird wattmeters, Collins or Racal receivers, BC 312, BC 603 or BC 1000 military receivers and everything else on the shelves.

The first day of work in the laboratory they told to me, “Start learning that instrument.” It was a Hewlett-Packard spectrum analyzer (maybe an HP85-something) that cost more than 10 times my annual gross salary at that time. I still remember the excitement of being able to touch it, for that day and the following days. Working in a company full of these kinds of instruments (the building even had a repair and calibration laboratory with HP employees), with more than a thousand engineers who knew everything from DC to microwaves to learn from, was like living in Eden. The salary was a secondary issue (at that time).

I worked on audio and RF circuits in the HF to UHF bands: active antennas, radiogoniometers, first tests on frequency hopping and spread spectrum, and a first sample of a Motorola 68000-based GPS as big as a microwave oven.

Each instrument had an HPIB (or GPIB or IEEE488) interface to the computer. So I started approaching this new (for me) world of programming an HP9845 computer (with a cost equivalent to 5 years of my salary then) to build up automatic test sets for the circuits I developed. I was very satisfied when I was able to obtain a 10-Hz frequency hopping by a Takeda-Riken frequency synthesizer. It was not easy with such a slow computer, BASIC language, and a bus with long latencies. I had to buffer each string of commands in an array and use some special pre-caching features of the HPIB interface I found in the manual.

Every circuit, even if it was analog, was interfaced with digital ports. The boards were full of SN74xx (or SN54xx) ICs, just to make some simple functions as switching, multiplexing, or similar. Here again, my lack of knowledge was filled with the “long history experience” on Bugbook series.

Well, audio, RF, programming, communications, interfacing, digital circuits. What was I still missing to have a good background for the next-coming hobby of robotics? Ah! Embedded programming. But I’ve already mentioned this experience.

After all these design jobs, because my knowledge started spreading on many different projects, it was natural to start working as a system engineer, taking care of all the aspects of a complex system, including project management.

NAN: You have a long-time interest in robotics and autonomous robot design. When did you first become interested in robots and why?

GUIDO: I’ve loved the very simple robots in the toy store windows since I was young, the same I have on my website (Pino and Nino). But they were too simple. Just making something a little bit more sophisticated required too much electronics at that time.

After a big gap in my electronics activity, I discovered a newly published robotic magazine, with an electronic parts supplement. This enabled me to build a programmable robot based on a Microchip PIC16F84. A new adventure started. I felt much younger. Suddenly, all the electronics-specialized neurons inside my brain, after being asleep for many years, woke up and started running again. Thanks to the Internet (not yet available when I left professional electronics design), I discovered a lot of new things: MCUs, free IDEs running even on a simple computer, free compilers, very cheap programming devices, and lots of documentation freely available. I threw away the last Texas Instruments databook I still had on my bookshelf and started studying again. There were a lot of new things to know, but, with a good background, it was a pleasant (if frantic) study. I’ve also bought some books, but they became old before I finished reading them.

Within a few months, jumping among all the hardware and software versions Microchip released at an astonishing rate, I found Johann Borenstein et al’s book Where Am I?: Systems and Methods for Mobile Robot Positioning (University of Michigan, 1996). This report and Borenstein’s website taught me a lot about autonomous navigation techniques. David P. Anderson’s “My Robots” webpage (www.geology.smu.edu/~dpa-www/myrobots.html) inspired all my robots, completed or forthcoming.

I’ve never wanted to make a remote-controlled car, so my robots must navigate autonomously in an unknown environment, reacting to the external stimuli. …

NAN: Robotics is a focal theme in many of the articles you have contributed to Circuit Cellar. One of your article series, “Robot Navigation and Control” (224–225, 2009), was about a navigation control subsystem you built for an autonomous differential steering explorer robot. The first part focused on the robotic platform that drives motors and controls an H-bridge. You then described the software development phase of the project. Is the project still in use? Have you made any updates to it? 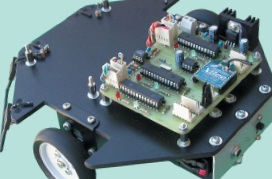 GUIDO: After I wrote that article series, that project evolved until the beginning of this year. There is a new switched power supply, a new audio sensor, the latest version of dsNav dsPIC33-based board became commercially available online, some mechanical changing, improvements on telemetry console, a lot of modifications in the firmware, and the UMBmark calibration performed successfully.

The goal is reached. That robot was a lab to experiment sensors, solutions, and technologies. Now I’m ready for a further step: outdoors.

NAN: You wrote another robotics-related article in 2010 titled, “A Sensor System for Robotics Applications” (Circuit Cellar 236). Here you describe adding senses—sight, hearing, and touch—to a robotics design. Tell us about the design, which is built around an Arduino Diecimila board. How does the board factor into the design? 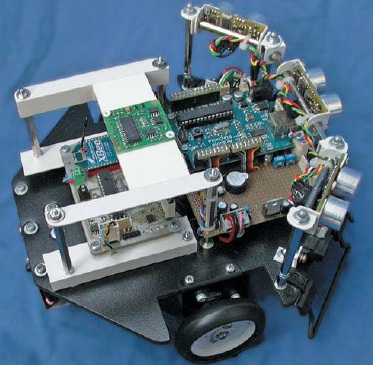 GUIDO: That was the first time I used an Arduino. I’ve always used PICs, and I wanted to test this well-known board. In that case, I needed to interface many I2C, analog sensors, and an I2C I/O expander. I didn’t want to waste time configuring peripherals. All the sensors had 5-V I/O. The computing time constraints were not so strict. Arduino fits perfectly into all of these prerequisites. The learning curve was very fast. There was already a library of every device I’ve used. There was no need for a voltage level translation between 3.3 and 5 V. Everything was easy, fast, and cheap. Why not use it for these kinds of projects?

NAN: You designed an audio sensor for a Rino robotic platform (“Sound Tone Detection with a PSoC Part 1 and Part 2,” Circuit Cellar 256–257, 2011). Why did you design the system? Did you design it for use at work or home? Give us some examples of how you’ve used the sensor.

GUIDO: I already had a sound board based on classic op-amp ICs. I discovered the PSoC devices in a robotic meeting. At that moment, there was a special offer for the PSoC1 programmer and, incidentally, it was close to my birthday. What a perfect gift from my relatives!

This was another excuse to study a completely different programmable device and add something new to my background. The learning curve was not as easy as the Arduino one. It is really different because… it does a very different job. The new PSoC-based audio board was smaller, simpler, and with many more features than the previous one. The original project was designed to detect a fixed 4-kHz tone, but now it is easy to change the central frequency, the band, and the behavior of the board. This confirms once more, if needed, that nowadays, this kind of professional design is also available to hobbyists. …

NAN: What do you consider to be the “next big thing” in the embedded design industry? Is there a particular technology that you’ve used or seen that will change the way engineers design in the coming months and years?

GUIDO: As often happens, the “big thing” is one of the smallest ones. Many manufacturers are working on micro-nano-pico watt devices. I’ve done a little but not very extreme experimenting with my Pendulum project. Using the sleeping features of a simple PIC10F22P with some care, I’ve maintained the pendulum’s oscillation bob for a year with a couple of AAA batteries and it is still oscillating behind me right now.

Because of this kind of MCU, we can start seriously thinking about energy harvesting. We can get energy from light, heat, any kind of RF, movement or whatever, to have a self-powered, autonomous device. Thanks to smartphones, PDAs, tablets, and other portable devices, the MEMS sensors have become smaller and less expensive.

In my opinion, all this technology—together with supercapacitors, solid-state batteries or similar—will spread many small devices everywhere to monitor everything.

The entire interview is published in Circuit Cellar 265 (August 2012).