Aubrey Kagan is a talented engineer with years of experience designing embedded systems. He’s also a prolific author. Between 2000 and 2010 he published 15 articles with Circuit Cellar on topics ranging from developing an AC current generator to resilience in embedded designs. His 2004 book Excel By Example: A Microsoft Excel Cookbook for Electronics Engineers provides tips on using Excel for engineering computations, data analysis, circuit modeling, and more.

AUBREY KAGAN: I live on the northern edge of Toronto, Ontario, Canada. However, that belies my accent, which the readers obviously cannot hear. I was born and grew up in “deepest, darkest Africa” just north of Rudyard Kipling’s “great gray-green, greasy Limpopo River” (see “How the Elephant Got Its Trunk” from Kipling’s Just So Stories) in what is now called Zimbabwe (then Rhodesia). I did my undergraduate engineering degree at the Technion, Israel Institute of Technology, and then returned to Africa for my MBA at the University of the Witwatersrand in South Africa. My early years in engineering were spent in South Africa, immigrating to Canada in 1989.

NAN PRICE: What is your current occupation?

AUBREY: I am an engineering manager at Emphatec, although managing occupies only a small portion of my day—the majority of my time is engineering. Most of the projects are for industrial monitoring and control. They tend to be a blend of analog and digital approaches and usually are quite compact with only a single function. 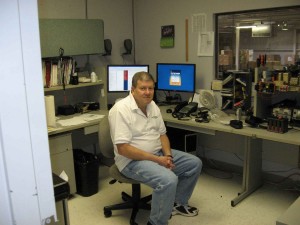 NAN: How long have you been interested in designing embedded systems?

AUBREY: I was given the opportunity to get into embedded design long before anybody thought to call it that. It was in 1977, and all we had were microprocessors, which I was trying to design into HF radio transceivers. I had been struggling with phase lock loops and control of the frequency divider seemed a likely candidate for computer control. Just at that time, there was an article in Popular Electronics on creating an evaluation board for the RCA CDP1802 COSMAC microprocessor. I used that as the basis for the development and as they say, the rest is history.

NAN: Circuit Cellar Online featured your article, “Developing an AC Current Generator” (119, 2000). Tell our newer readers about that project. Do you still use the generator? Have you made any upgrades to it?

AUBREY: That was my first Circuit Cellar article and my only collaborative effort (with Ernesto Gradin). It is probably my favorite project because it is so unusual and remains pertinent to this day. 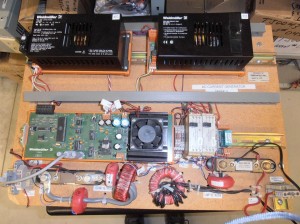 This AC current generator is one of Kagan’s favorite projects.

Some of the products that we make involve monitoring an AC current and converting the measurement to a 4-to-20-mA analog signal. Some of the devices will measure currents up to 100 A AC. In order to test and calibrate these units, obviously you need an accurate current. If you use a variable AC voltage into a fixed load or a fixed voltage into a variable load to generate the current, you will be working with dangerous voltages and lots of heat. This leads to errors due to heating and more importantly health risks to the operators. We all know in transformers (VIN × IIN) = (VOUT × IOUT) and VIN = (N × VOUT) and so if you make a transformer with a low number of output turns, there is a low output voltage, and for a given power input you can then derive a high current—no heat and very low voltage. To improve the performance, we added a feedback loop with a micro then implemented PID control. The generator is still in use. I have not made any upgrades to it, but I certainly could improve upon it now. I would like to increase its resolution, and of course some of the components are now obsolete, so they would need revision. I might consider onboard displays as well, not control from a PC.

NAN: Your 2002 article series, “Driving the NKK SmartSwitch” (Circuit Cellar 144 and 145), focused on using a Cypress Microsystems programm-able system-on-chip (PSoC) microcomputer as an interface to drive the SmartSwitch. Tell us how this project came about.

AUBREY: Signal conditioning modules in the process-control market tend to be physically small, typically 2” high by 3” deep by 0.75” wide. Of course, there are many much bigger and smaller examples. All of them mount on a rail installed in a panel. Aside from some LED indications, there is very little information you can glean by just looking at the modules. As a result, there has been a slow trend in the industry to add displays to each individual module. Because of the size, the displays are small and are limited to seven-segment displays of up to four digits and sometimes some indicators, if a custom LCD has been used. Also, the displays are invisible when the panel door is closed. The NKK SmartSwitch would allow three lines of six alphanumeric characters and even some graphics. It would also allow the user to change operational parameters for the module. The NKK projects through the panel door and so the information is available to the outside world.

Simply driving the display was the focus of my discussion in Circuit Cellar. At the time, the article had the distinction of being used as an application note by two different companies simultaneously (NKK and Cypress).

But there is much more to the story. If an NKK SmartSwitch and driver were added to a single module, it would probably double the effective price of the module, and so we came up with a networked approach that allowed a single NKK SmartSwitch to be shared among up to 30 different modules spreading the costs and now becoming economically more viable.