In the U.S., a common gift to give someone when he or she finishes school or completes a course of career training is Dr. Seuss’s book, Oh, the Place You’ll Go. I thought of the book’s title when I first read our May interview with engineer Lawrence Foltzer. After finishing electronics training in the U.S. Navy, Foltzer found himself working in such diverse locations as a destroyer in Mediterranean Sea, IBM’s Watson Research Center in Yorktown Heights, NY, and Optilink, DSC, Alcatel, and Turin Networks in Petaluma, CA. Simply put: his electronics training has taken him to many interesting places! 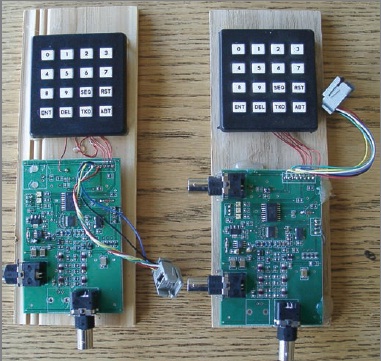 Lawrence Foltzer presented these frequency-domain test instruments in Circuit Cellar 254 (September 2011). An Analog Devices AD9834-based RFG is on the left. An AD5930-based SFG is on the right. The ICSP interface used to program a Microchip Technology PIC16F627A microcontroller is provided by a dangling RJ connector socket. (Source: L. Foltzer, CC254)

Below is an abridged version of the interview now available in Circuit Cellar 262 (May 2012).

NAN: You spent 30 years working in the fiber optics communication industry. How did that come about? Have you always had an interest specifically in fiber optic technology?

LARRY: My career has taken me many interesting places, working with an amazing group of people, on the cusp of many technologies. I got my first electronics training in the Navy, both operating and maintaining the various anti-submarine warfare systems including the active sonar system; Gertrude, the underwater telephone; and two fire-control electromechanical computers for hedgehog and torpedo targeting. I spent two of my four years in the Navy in schools.

When I got out of the Navy in 1964, I managed to land a job with IBM. I’d applied for a job maintaining computers, but IBM sent me to the Thomas J. Watson Research Center in Yorktown Heights, NY. They gave me several tests on two different visits before hiring me. I was one of four out of forty who got a job. Mine was working in John B. Gunn’s group, preparing Gunn-oscillator samples and assisting the physicists in the group in performing both microwave and high-speed pulsed measurements.

One of my sample preparation duties was the application of AuGeNi ohmic contacts on GaAs samples. Ohmic contacts were essential to the proper operation of the Gunn effect, which is a bulk semiconductor phenomenon. Other labs at the research center were also working with GaAs for other devices: the LED, injection laser diode, and Hall-effect sensors to name a few. It turned out that the evaporated AuGeNi contact used on the Gunn devices was superior to the plated AuSnIn contact, so I soon found myself making 40,000 A per square centimeter pulsed-diode lasers. A year later I transferred to Gaithersburg, MD, to IBM-FSD where I was responsible for transferring laser diode technology to the group that made battlefield laser illuminators and optical radars. We used flexible light guides to bring the output from many lasers together to increase beam brightness.

As the Vietnam war came to an end, IBM closed down the Laser and Quantum Electronics (LQE) group I was in, but at the same time I received a job offer to join Comsat Labs, Clarksburg, MD, from an engineer for whom I had built Gunn devices for phased array studies. So back to the world of microwaves for a few years where I worked on the satellite qualification of tunnel (Asaki) diodes, Impatt diodes, step-recovery diodes, and GaAs FETs.

About a year after joining Comsat Labs, the former head of the now defunct IBM-LQE group, Bill Culver, called on me to help him prove to the army that a “single-fiber,” over-the-hill guided missile could replace the TOW missile and save soldier lives from the target tanks counterfire.

NAN: Tell us about some of your early projects and the types of technologies you used and worked on during that time.

LARRY: So, in 1973-ish, Bill Culver, Gordon Gould (Laser Inventor), and I formed Optelecom, Inc. In those days, when one spoke of fiber optics, one meant fiber bundles. Single fibers were seen as too unreliable, so hundreds of fibers were bundled together so that a loss of tens of fibers only caused a loss of a few percent of the injected light. Furthermore, bundles presented a large cross section to the primitive light sources of the day, which helped increase transmission distances.

Bill remembered seeing one of C. L. Stong’s Amateur Scientist columns in Scientific American about a beam balance based on a silica fiber suspension. In that column, Stong had shown that silica fibers could be made with tensile strengths 20 times that of steel. So a week later, Bill and I had constructed a fiber drawing apparatus in my basement and we drew the first few meters of fiber of the approximately 350 km of fiber we made in my home until we captured our first army contract and opened an office in Gaithersburg, MD.

Our first fibers were for mechanical-strength development. Optical losses measured hundreds of dBs/km in those days. But our plastic clad silica (PCS) fiber losses pretty much tracked those of Corning, Bell Labs, and ITT-EOPD (Electro-Optics Products Division). Pretty soon we were making 8 dB/km fibers up to 6 km in length. I left Optelecom when follow-on contracts with the army slowed; but by that time we had demonstrated missile payout of 4 km of signal carrying fiber at speeds of 600 ft/s, and slower speed runs from fixed-wing and Helo RPVs. The first video games were born!

At Optelecom I also worked with Gordon Gould on a CO2 laser-based secure communications system. A ground-based laser interrogated a Stark-effect based modulator and retro-reflector that returned a video signal to the ground station. I designed and developed all of that system’s electronics.

Government funding for our fiber payout work diminished, so I joined ITT-EOPD in 1976. In those days, if you needed a connector or a splice, or a pigtailed LED, laser or detector, you made it yourself; and I was good with my hands. So, in addition to running programs to develop fused fiber couplers, etc., I was also in charge of the group that built the emitters and detectors needed to support the transmission systems group.

NAN: You participated in Motorola’s IEEE-802 MAC subcommittee on token-passing access control methods. Tell us about that experience.

NAN: How long have you been designing MCU-based systems? Tell us about your first MCU-based design.

LARRY: I was in Motorola’s strategic marketing department (SMD) when the Apple 2 first came on the scene. Some of the folks in the SMD were the developers of the RadioShack color computer. Long story short, I quickly became a fan of the MC6809 CPU, and wrote some pretty fancy code for the day that rotated 3-D objects, and a more animated version of Space Invaders. I developed a menu-driven EPROM programmer that could program all of the EPROMs then available and then some. My company, Computer Accessories of AZ, advertised in Rainbow magazine until the PC savaged the market. I sold about 1,200 programmers and a few other products before closing up shop.

NAN: Circuit Cellar has published four of your articles about design projects. Your first article, “Long-Range Infrared Communications” was published in 1993 (Circuit Cellar 35). Which advances in IR technology have most impressed and excited you since then?

LARRY: Vertical cavity surface-emitting lasers (VCSEL). The Japanese were the first to realize their potential, but did not participate in their early development. Honeywell Optoelectronics was the first to offer 850-nm VCSELs commercially. I think I bought my first VCSELs from Hamilton Avnet in the late 1980s for $6 a pop. But 850 nm is excluded from Telecom (Bellcore), so companies like Cielo and Picolight went to work on long wavelength parts. I worked with Cielo on 1310-nm VCSEL array technology while at Turin Networks, and actually succeeded in adding VCSEL transmitter and array receiver optics to several optical line cards. It was my hope that VCSELs would find their way into the fiber to the home (FTTH) systems of the future, delivering 1 Gbps or more for 33% of what it costs today.