Home » Innovations in Mobile Robotics: An Interview with Nick Kohut

Nick Kohut and a lab mate turned their academic interest in mobile robotics into an exciting business—Dash Robotics, which sells a small, insect-like running robot that you can control with a smartphone. We recently asked Nick about advances in running robot technology, the benefits of aerodynamic turning , and his thoughts on the future of robotics. 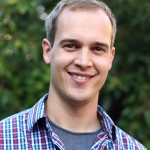 CIRCUIT CELLAR: When did you become interested in robotics? Can you tell us about your first robotics project?

NICK: I actually first became interested in robotics in 2010, which was my third year of graduate school. I had become an engineer originally because I was really interested in cars, specifically vehicle dynamics. I had just wrapped up my Master’s working on a research project at Cal with Audi, and I needed a new project for my PhD.

I looked around at different labs, and the work being done in Ron Fearing’s robotics lab seemed really interesting—basically vehicles with legs. Believe it or not, I had never done any robotics or even soldered a single joint until that point. I had a steep learning curve in the lab, and my first robotics project was MEDIC, a 4 cm walking robot. It was pretty tough but I learned a lot, and fell in love with the subject.

NICK: At the University of Illinois Prof. Andrew Alleyne was one of my advisors, and I took his intro controls course junior year. I really liked it—controls and dynamics are definitely my favorite subject, anything that moves keeps my interest. It also had a lot of math which I was pretty decent at for an engineer so I did really well in the class. I decided I should study it in grad school. What they don’t tell you is that grad school controls is totally different, but I ended up liking that too.

CIRCUIT CELLAR: Tell us about the work you did in the Biomimetics and Dexterous Manipulation Laboratory under Professor Mark Cutkosky.

NICK: I was only in Mark’s lab for about seven months. It was a great place to work, but I had founded Dash Robotics in between taking the postdoc position and actually starting the postdoc. Because of that I only worked on one project and in seven months there’s only so much you can do. I was trying to scale up an Electroactive Polymer actuator (EAP) for use in Honda’s Asimo robot. It’s an interesting challenge that involves a lot of rapid prototyping, materials research, and solid mechanics. Also quality control, which is hard to in a lab setting.

CIRCUIT CELLAR: How did you come to use aerodynamic forces to turn running robots? What led you to this field of research?

NICK: This actually started with biologists like Robert Full and Tom Libby studying lizards. Bob and Tom had discovered that when lizards jump they use their tail as a form of attitude control. They had also shown that in a wind tunnel they will use their tail to turn. I was tasked with getting a robot to turn using a tail, which I did with some pretty good success. TaylRoACH (the robot I built in 2012) ended up being the fastest turning legged robot in the world. It could turn 90° in 1/4 of a second.

After I had shown that, I started to wonder what else the tail could do. I tried a lot of things – mostly back of the envelope ideas—like stability on inclines or using as a “7th leg” in confined places. A lot of those didn’t work out, and someone suggested I use it as a helicopter blade, half-joking. It got me to thinking, what if you used it as a sail? I ran the numbers in like an hour and realized, man, this might actually work.

CIRCUIT CELLAR: What are the benefits of aerodynamic turning?

NICK: There are a few benefits. One interesting thing is that it will only work at small scales, but that’s probably where you want it. When robots start to get smaller and smaller, you become really limited with what you can do. You can’t add a lot of sensors, actuators, or computing power (though this is changing every day!). So you probably have a very simple robot, maybe only a few actuators. The SailRoACH has six legs, and only three actuators, but can make wide turns, rapid turns, and pretty much everything in between. So it can keep things simple.

It also can be used in a research setting to study the dynamics of the robot. If you want to add a constant yaw disturbance to the robot and measure how that affects its running ability, this is a way to do that. This may sound like an esoteric need but it’s how research gets done, and it helps us understand running robots better.

CIRCUIT CELLAR: Tell us about the Millirobot Enabled Diagnostic of Integrated Circuits (MEDIC) project. Why did you start the project and what were the results?

NICK: MEDIC was an interesting project because it was my first robotics project and we were trying to solve a very difficult problem, which was “Can you build a robot to navigate inside a computer motherboard?” We were contracted to work on this with Lockheed Martin, and they supplied the software end of things.

Basically we built this incredibly small robot (~5 cm and 5 g) that had legs and a hull that would allow it to scoot around a motherboard, turn, and climb over basic, short obstacles (like a microchip). I worked on the mechanics and design of the robot, with a lot of help from other lab members on the electronics, and Lockheed provided the software that allowed MEDIC (called “Adorable Turtle Bot” by us) to navigate. It actually had a little camera on it, so it would take a picture, send that information to a laptop, then the laptop would send a few instructions (“go forward two steps, then turn left for two step”), the robot would execute the instructions, take another picture, and repeat the process.

It was pretty cool because you had this tiny robot doing SLAM and navigating autonomously inside a computer motherboard. Unfortunately it was slower than oatmeal running downhill and didn’t work most of the time, but that’s research. By the end we had some results we were very happy with and wrote two solid publications on it.

You can control Dash robots with a cell phone

CIRCUIT CELLAR: What led you and your co-founders to launch Dash Robotics in 2013? And can you tell us about your current team?

NICK: My co-founder Andrew and I were lab mates in grad school and climbing buddies. We both knew that we wanted to run our own business, because we couldn’t stand working in a cubicle; it’s why we were in grad school in the first place.

This idea of starting a business bounced around for a couple years but we never did anything with it. In the meantime, we had been to various events at schools and museums and saw that people loved the robot, they just went wild for it. Everyone asked to buy it but we always told them, “no, this is just a research tool.” In late 2012 we saw the first beginnings of all these smart toys and thought “well, what we have here is way cooler than that.” So we formed Dash Robotics, Inc. We hadn’t even graduated yet but we got a lot of support from the University and friends and family and were able to make it until February 2015 without taking any venture investment. Now I’m very happy we have that. 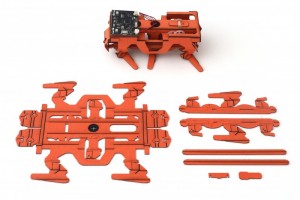 The robots are made flat. Simple fold and assemble them.

CIRCUIT CELLAR: Dash’s first robot is a phone-controlled, insect-like running robot. It is shipped “origami”-style for people to assemble themselves. Tell us a bit about the process of planning and designing the robot.

NICK: This is pretty tough to answer in one question. The “origami” style is a process called SCM that was originally developed at UC Berkeley. The design is all done in 2-D and then cut out and folded up to 3-D, so it takes a bit of experience to become good at designing mechanisms using this process. You can’t just build it in 3-D CAD and see what it will look like before making it.

There are some people who are trying to change that, like Dan Aukes from Harvard. Right now we still do it all on intuition and experience. The original robot was developed in 2009, and it saw incremental changes over the next 4 years or so. In 2013 when we founded the company we had a whole new set of requirements for the robot (a research tool and consumer product are vastly different) so we started making a lot of changes. There have probably been at least 50 revisions since 2013—maybe 100. Each time it gets a little better, and we do a lot of testing to make sure we’re on the right track.

CIRCUIT CELLAR: Is DIY, hobby robotics your main focus at Dash Robotics? Do plan you branch out, perhaps into robot systems for industry, military, or medical applications?

NICK: That’s our main focus right now, along with making a product that kids will love as well. I think there are a lot of potential directions like agriculture, infrastructure inspection, search and rescue, etc. That’s much further down the road though.

CIRCUIT CELLAR: What’s next for Dash Robotics? Where would you like to see the company in 12 months?

NICK: With its products flying off store shelves and a great team in place making it all happen!

CIRCUIT CELLAR: What are your thoughts on the future of robotics?

NICK: This is a great, and of course difficult, question. It also depends on how you define robotics. I think on one end you’re going to see a lot of jobs displaced by self-driving cars and trucks, robotic dishwashers, housecleaners, etc. On the other end AI is going to be able to do a lot of knowledge work now done by lawyers, doctors, and engineers. Both of those advances are going to be a major challenge for society.

If you’re talking about mobile robotics specifically, where a lot of my interest lies, there is a major challenge in actuators and power density. Boston Dynamics builds some amazing machines but the internal combustion engine is loud and dirty, and current lithium batteries are only going to get you so far. Tesla is working very hard on the battery problem, and hopefully its new Gigafactory will bring prices down. If Tesla makes a big advance in battery technology I think you may see a whole new category of mobile robots breaking out.

Innovations in Mobile Robotics: An Interview with Nick Kohut

Insights The Future of Circuit Design

Insights The Future of Hardware Design