In 2009, Andrew Meyer, an MIT-trained engineer and entrepreneur, co-founded LeafLabs, a Cambridge, MA-based R&D firm that designs “powerful physical computing devices for control and communication among smart machines (including humans).” We recently asked Andrew to tell us about his background, detail some of his most intriguing projects, tell us about his contributions to Project Ara, and share his thoughts on the future of electrical engineering. 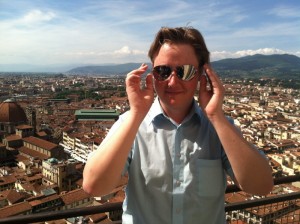 CIRCUIT CELLAR: How did you become interested in electronics? Did you start at a young age?

ANDREW: Yes, actually, but I am not sure I really got anywhere fooling around as a kid. I had a deep love of remote control cars and airplanes in middle school. I was totally obsessed with figuring out how to build my own control radio. This was right before the rise of Google, and I scoured the net for info on circuits. In the end, I achieved a reasonable grasp on really simple RC type circuits but completely failed in figuring out the radio. Later in high school I took some courses at the local community college and built an AM radio and got into the math for the first time – j and omega and all that.

CIRCUIT CELLAR: What is Leaflabs? How did it start? Who comprises your team today?

ANDREW: LeafLabs is an R&D firm specializing in embedded and distributed systems. Projects start as solving specific problems for a client, but the idea is to turn those relationships into product opportunities. To me, that’s what separates R&D from consulting. 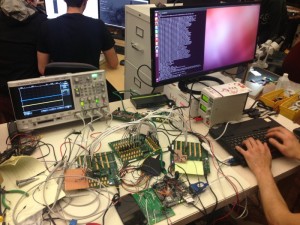 I started LeafLabs with a handful of friends in 2009. It was an all MIT cast of engineers, and it took four or five years before I understood how much we were holding ourselves back by not embracing some marketing and sales talent. The original concept was to try and design ICs that were optimized for running certain machine learning algorithms at low power. The idea was that smartphones might want to do speech to text some day without sending the audio off to the cloud. This was way too ambitious for a group of 22 year olds with no money.

Our second overly ambitious idea was to try and solve the “FPGA problem.” I’m still really passionate about this, but it too was too much for four kids in a basement to take a big bite off. The problem is that FPGAs vendors like Xilinx and Altera have loads of expertise in silicon, but great software is just not in their DNA. Imagine if x86 never published their instruction set. What if Intel insisted on owning not just the processors, but the languages, compilers, libraries, IDEs, debuggers, operating systems, and the rest of it? Would we ever have gotten to Linux? What about Python? FPGAs have enormous potential to surpass even the GPU as a completely standard technology in computer systems. There should some gate fabric in my phone. The development tools just suck, suck, suck. If any FPGA executives are reading this: Please open up your bitstream formats, the FSF and the rest of the community will get the ball rolling on an open toolchain that will far exceed what you guys are doing internally. You will change the world.

CIRCUIT CELLAR: How did the Maple microcontroller board come about?

ANDREW: Arduino was really starting to come up at the time. I had just left Analog, where we had been using the 32-bit Cortex M3. We started asking “Chips like the STM32 are clearly the way of the future, why on earth is Arduino using a chip from the ‘90s?” Perry, another LeafLabs founder, was really passionate about this. ARM is taking over the world, the community deserves a product that is as easy to use as Arduino, but built on top of modern technology.

CIRCUIT CELLAR: Can you give a general overview of your involvement with Project Ara?

ANDREW: We got into Ara at the beginning as subcontractors to the company that was leading a lot of the engineering, NK Labs. Since then our role has expanded quite a bit, but we are still focused on software and firmware development. Everyone understood that Ara was going to require a lot of firmware and FPGA work, and so we were a natural choice to get involved. One of the first Ara prototypes actually used the Maple software library, libmaple, and had eight FPGAs in it! For your readers that are interested in Ara, please to check out projectara.com and https://github.com/projectara/greybus/.

LeafLabs is focused on firmware development. What’s really exciting to me about the project is the technology under the hood. Basically, what we have done is built a network on a PCB. The first big problem with embedded linux devices is that they are completely centered around the SoC. Change the SoC and you are in for ton of software development, for instance, to bring your display driver back to life. Similarly, changes to the design, such as incorporating a faster Wi-Fi chip, might force you to change the SoC. This severe coupling between everything keeps designers from iterating. You have this attitude of “OK, no one touch this design for the next 5 years, we finally got it working.” If we have learned anything from SaaS and App companies it’s that quickly iterating and continuous deployment are key to great products. If your platform inhibits iteration, you have a big problem.

The other problem with embedded systems is that there are so many protocols! SDIO, USB, DSI, I2C, SPI, CSI, blah blah blah. Do we really need so many!? Think how much mileage we get out of TCP/IP. The protocol explosion just adds impedance to the entire design process, and forces engineers to be worrying about bits toggling on traces rather than customer facing features.

The technology being developed for Ara, called Greybus, solves both these problems. The centerpiece of our phone is a switch, and the display, Wi-Fi, audio, baseband, etc all hang off the switch as network devices. Even the processor is just another module hanging off this network. All modules speak the same “good enough” protocol called UniPro (Unified Protocol). The possibilities here are absolutely tantalizing. To learn more about Greybus, see here: https://github.com/projectara/greybus/.

CIRCUIT CELLAR: Can you define “minimalist data acquisition” for our readers? What is it and why does it interest you?

ANDREW: More and more fields, but particularly in neuroscience, are having to deal with outrageously huge real-time data sets. There are 100 billion neurons in the human brain. If we want to listen to just 1,000 of them, we are already talking about ~1 Gbps. Ed Boyden, a professor at MIT, asked us if we could build some hardware to help handle the torrent. Could we scale to 1 Tbps? Could we build something that researchers on a budget could actually afford and that mere mortals could use? 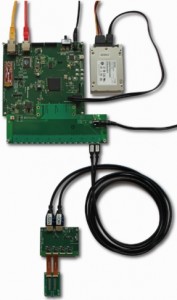 Willow is a hardware platform for capturing, storing, and processing neuroscience data at this scale. We had to be “minimalist” to keep costs down, and ensure our system is easy to use. Since we need to use an FPGA anyway to interface with a data source (like a bank of ADCs, or an array of image sensors), we thought, “Why not use the same chip for interfacing to storage?” With a single $150 FPGA and a couple of $200 SSD drives, we can record at 12 Gbps, put guarantees on throughput, and record for a couple of hours!

CIRCUIT CELLAR: What are you goals for LeafLabs for the next 6 to 12 months?

ANDREW: Including our superb remote contractors, our team is pushing 20. A year from now, it could be double that. This is a really tricky transition—where company culture really starts to solidify, where project management becomes a first-order problem, and where people’s careers are on the line. My first goal for LeafLabs is make sure we nail this transition and build off of a really solid foundation. Besides that, we are always looking for compelling new problems to work on and new markets to play in. Getting into neuroscience has been an absolute blast.

The complete interview appears in Circuit Cellar 298 (May 2015).

Insights The Internet of Things: A Very Disruptive Force

Insights The Future of Intelligent Robots