Written by Nan Price
Eric Forkosh starting building his first robot when he was a teenager and has been designing ever since. This NYC-based electrical engineer’s projects include everything from dancing robots to remote monitoring devices to cellular module boards to analog signals—Nan Price, Associate Editor

NAN: Tell us about your start-up company, Narobo. 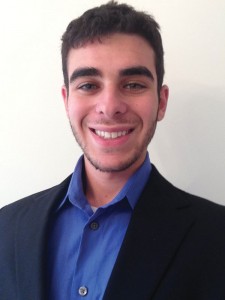 ERIC: Narobo is essentially the company through which I do all my consulting work. I’ve built everything from dancing robots to cellular field equipment. Most recently I’ve been working with some farmers in the Midwest on remote monitoring. We monitor a lot of different things remotely, and I’ve helped develop an online portal and an app. The most interesting feature of our system is that we have a custom tablet rig that can interface directly to the electronics over just the USB connection. We use Google’s Android software development kit to pull that off.

ERIC: The DroneCell was my second official product released, the first being the Roboduino. The Roboduino was relatively simple; it was just a modified Arduino that made building robots easy. We used to sell it online at CuriousInventor.com for a little while, and there was always a trickle of sales, but it was never a huge success. I still get a kick out of seeing Roboduino in projects online, it’s always nice to see people appreciating my work. 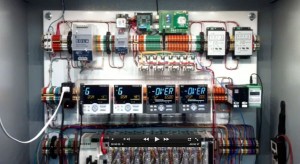 The DroneCell is a cellular module board that communicates with devices with TTL UARTs.

The DroneCell is the other product of mine, and my personal favorite. It’s a cellular module board geared toward the hobbyist. A few years ago, if you wanted to add cellular functionality to your system you had to do a custom PCB for it. You had to deal with really low voltage levels, very high peak power draws, and hard-to-read pins. DroneCell solved the problem and made it very easy to interface to hobbyist systems such as the Arduino. Putting on proper power regulation was easy, but my biggest design challenge was how to handle the very low voltage levels. In the end, I put together a very clever voltage shifter that worked with 3V3 and 5 V, with some calculated diodes and resistors.

NAN: Tell us about your first project. Where were you at the time and what did you learn from the experience? 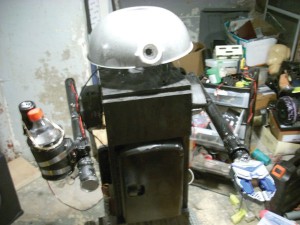 Eric’s Butler robot was his first electronics project. He started building it when he was still in high school.

ERIC: The Butler robot was my first real electronics project. I started building it in ninth grade, and for a really stupid reason. I just wanted to build a personal robot, like on TV. My first version of the Butler robot was cobbled together using an old laptop, a USB-to-I/O converter called Phidgets, and old wheelchair motors I bought on eBay.

I didn’t use anything fancy for this robot, all the software was written in Visual Basic and ran on Windows XP. For motor controllers, I used some old DPDT automotive relays I had lying around. They did the job but obviously I wasn’t able to PWM them for speed control.

My second version came about two years later, and was built with the intention of winning the Instructables Robot contest. I didn’t win first place, but my tutorial “How to Build a Butler Robot” placed in the top 10 and was mentioned in The Instructables Book in print. This version was a cleaner version of everything I had done before. I built a sleek black robot body (at least it was sleek back then!) and fabricated an upside-down bowl-shaped head that housed the webcam. The electronics were basically the same. The main new features were a basic robot arm that poured you a drink (two servos and a large DC motor) and a built-in mini fridge. I also got voice command to work really well by hooking up my Visual Basic software with Dragon’s speech-to-text converter.

The Butler robot was a great project and I learned a lot about electronics and software from doing it. If I were to build a Butler robot right now, I’d do it completely differently. But I think it was an important to my engineering career and it taught me that anything is possible with some hacking and hard work.

At the same time as I was doing my Butler robot (probably around 2008), I lucked out and was hired by an entertainer in Hong Kong. He saw my Butler robot online and hired me to build him a dancing robot that was synced to music. We solved the issue of syncing to music by putting dual-tone multi-frequency (DTMF) tones on the left channel audio and music on the right channel. The right channel went to speakers and the left channel went to a decoder that translated DTMF tone sequences to robot movement. This was good because all the data and dance moves were part of the same audio file. All we had to do was prepare special audio files and the robot would work with any music player (e.g., iPod, laptop, CD, etc.). The robot is used in shows to this day, and my performer client even hired a professional cartoon voice actor to give the robot a personality.

NAN: You were an adjunct professor at the Cooper Union for the Advancement of Science and Art in New York City. What types of courses did you teach and what did you enjoy most about teaching?

ERIC: I will be entering my senior year at Cooper Union in the Fall 2014. Two years ago, I took a year off from school to pursue my work. This past year I completed my junior year. I taught a semester of “Microcontroller Projects” at Cooper Union during my year off from being a student. We built a lot of really great projects using Arduino. One final project that really impressed me was a small robot car that parallel parked itself. Another project was a family of spider robots that were remotely controlled and could shrink up into a ball.

Cooper Union is filled with really bright students and teaching exposed me to the different thought processes people have when trying to build a solution. I think teaching helped me grow as a person and helped me understand that in engineering—and possibly in life—there is no one right answer. There are different paths to the same destination. I really enjoyed teaching because it made me evaluate my understanding about electronics, software, and robotics. It forced me to make sure I really understood what was going on in intricate detail.

NAN: You have competed in robotics competitions including RoboCup in Austria. Tell us about these experiences—what types of robots did you build for the competitions? 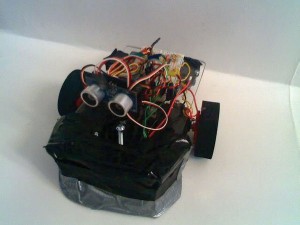 Eric worked with his high school’s robotics team to design this robot for a RoboCup competition.

ERIC: In high school I was the robotics team captain and we built a line-following robot and a soccer robot to compete in RoboCup Junior in the US. We won first place in the RoboCup Junior Northeast Regional and were invited to compete in Austria for the International RoboCup Junior games. So we traveled as a team to Austria to compete and we got to see a lot of interesting projects and many other soccer teams compete. I remember the Iranian RoboCup Junior team had a crazy robot that competed against us; it was built out of steel and looked like a miniature tank.

My best memory from Austria was when our robot broke and I had to fix it. Our robot was omnidirectional with four omni wheels in each corner that let it drive at any angle or orientation it wanted. It could zigzag across the field without a problem. At our first match, I put the robot down on the little soccer field to compete… and it wouldn’t move. During transportation, one of the motors broke. Disappointed, we had to forfeit that match. But I didn’t give up. I removed one of the wheels and rewrote the code to operate with only three motors functional. Again we tried to compete, and again another motor appeared to be broken. I removed yet another wheel and stuck a bottle cap as a caster wheel on the back. I rewrote the code, which was running on a little Microchip Technology PIC microcontroller, and programmed the robot to operate with only two wheels working. The crippled robot put up a good fight, but unfortunately it wasn’t enough. I think we scored one goal total, and that was when the robot had just two wheels working.

After the competition, during an interview with the judges, we had a laugh comparing our disabled robot to the videos we took back home with the robot scoring goal after goal. I learned from that incident to always be prepared for the worst, do your best, and sometimes stuff just happens. I’m happy I tried and did my best to fix it, I have no regrets. I have a some of the gears from that robot at home on display as a reminder to always prepare for emergencies and to always try my best.

ERIC: The last product would be an op-amp I bought, probably the 411 chip. For a current project, I had to generate a –5-to-5-V analog signal from a microcontroller. My temporary solution was to RC filter the PWM output from the op-amp and then use an amplifier with a
gain of 2 and a 2.5-V “virtual ground.” The result is that 2.5 V is the new “zero” voltage. You can achieve –5 V by giving the op-amp 0 V, a –2.5-V difference that is amplified by 2 to yield 5 V. Similarly, 5 V is a 2.5-V difference from the virtual ground, amplified by 2 it provides a 5-V output.

ERIC: I think the next big thing will be personalized health care via smartphones. There are already some insulin pumps and heart monitors that communicate with special smartphone apps via Bluetooth. I think that’s excellent. We have all this computing power in our pockets, we should put it to good use. It would be nice to see these apps educating smartphone users—the patients themselves— about their current health condition. It might inspire patients/users to live healthier lifestyles and take care of themselves. I don’t think the FDA is completely there yet, but I’m excited to see what the future will bring. Remember, the future is what you build it to be.