Erin “RobotGrrl” Kennedy designs award-winning robots. Her RoboBrrd DIY robot-building kit successfully launched in 2012 and was featured in IEEE Spectrum, Forbes, Wired, and on the Discovery Channel. Erin was recognized as  one of the 20 Intel Emerging Young Entrepreneurs. In this interview she tells us about her passion for robotics, early designs, and future plans. 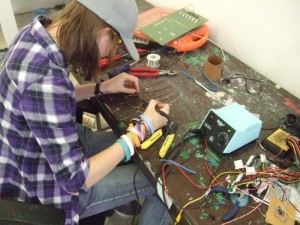 CIRCUIT CELLAR: How and when did Erin Kennedy become “RobotGrrl?”

ERIN: I used to play an online game, but didn’t want to use my nickname from there. I was building LEGO robots at the time, so my friend suggested “RobotGrrl.” It sounds like a growl without the “ow.”

CIRCUIT CELLAR: Tell us about RobotGrrl.com. Why and when did you decide to start blogging?

ERIN: I started RobotGrrl.com around 2006 to document my adventures into the world of robotics. I would post updates to my project on there, similar to a log book. It helped me gain a community that would follow my adventures.

CIRCUIT CELLAR: Your RoboBrrd company is based on the success of your RoboBrrd beginner robot-building kit, which was funded by Indiegogo in 2012. How does the robot work? What is included in the kit? 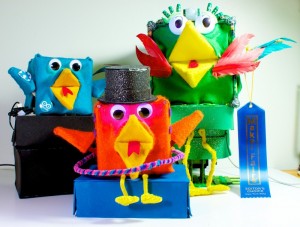 The first prototype of RoboBrrd was created with pencils and popsicle sticks. Adafruit sent me the electronics and in return I would make weekly videos about building the robot. People seemed to like the robot, so I kept making newer prototypes that would improve on problems and add more to the design.

Eventually I started working on a laser-cut kit version. I won the WyoLum Open Hardware grant and, with the money, I was able to order PCBs I designed for RoboBrrd.

I had enough money for a flight out to California (for RoboGames and Maker Faire Bay Area) where I was an artist in residence at Evil Mad Scientist Laboratories. It was helpful to be able to use their laser cutter right when a new design was ready. Plus, I was able to build a really old and cool Heathkit. 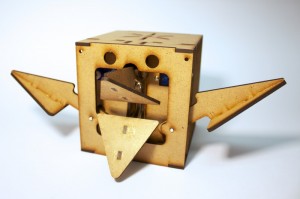 Afterward, I worked on the design a little more. SpikenzieLabs (www.spikenzielabs.com) helped laser cut it for me and eventually it was all finished. It was such an awesome feeling to finally have a solid design!

In 2012, RoboBrrd launched on Indiegogo and luckily there were enough friends out there who were able to help the project and back it. They were all very enthusiastic about the project. I was really lucky.

Now I am working on a newer version of the 3-D printed RoboBrrd and some iOS applications that use Bluetooth Low Energy (BLE) to communicate with it. The design has come a long way, and it has been fun to learn many new things from RoboBrrd.

CIRCUIT CELLAR: RoboBrrd has had widespread popularity. The robots have been featured on The Discovery Channel, Forbes, MAKE, and WIRED. To what do you attribute your success?

ERIN: The success of RoboBrrd is attributed to everyone who is enthusiastic about it, especially those who have bought a kit or made their own RoboBrrds. It is always fun to see whenever people make modifications to their RoboBrrds.

All I did was make and deliver the kit. It’s all of the “friends of RoboBrrd” who bring their own creative ideas to make it really shine. Also, from the previous question, the readers can see that I had a lot of help along the way.

Having the robots featured on many websites required some luck. You never know if your e-mail pitch is what the journalists are looking for to cover the robot. I was really lucky that websites featured RoboBrrd; it provides it with a little more credibility.

In my opinion, the quirkiness of RoboBrrd helps as well. Sometimes people view it as the “open-source hardware (OSHW) Furby.” It’s a robotic bird and it isn’t your regular wheeled-robot.

CIRCUIT CELLAR: What was the first embedded system you designed. Where were you at the time? What did you learn from the experience?

ERIN: There were systems that I designed using the LEGO Mindstorms RCX 2.0, but my very first design from scratch was a robot called BubbleBoy. The outer appearance looked like a pink snowman. It sat on a green ice cream container and wore a top hat. It was very rudimentary. At the time I was in Grade 11.

Inside of the body sphere were two servos. The servos would push/pull on paper clips that were attached to the head. Inside the head there was a DC motor to spin the top hat around. There was also a smaller DC motor inside the body to attach to a hula hoop to wiggle it. The electronics were enclosed in the container. The robot used an Arduino Diecimila microcontroller board (limited-edition prototype version) and some transistors to control the motors from battery power. There was also a LCD to display the robot’s current mood and water and food levels. On each side of the screen buttons incremented the water or food levels.

There was not as much documentation online about the Arduino and learning electronics as there is now. I gained many skills from this experience.

The biggest thing I learned from BubbleBoy was how to drive DC motors by using transistors. I also learned how to not mount servos. The hot glue on polystyrene was never rigid enough and kept moving. It was a fun project; the hands-on making of a robot character can really help you kick off making bigger projects.

You can read the entire interview in Circuit Cellar 293 (December 2014).

Insights Seven Engineers on the Future of Electrical Engine…