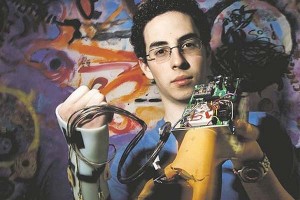 Jeremy Blum, 23, has always been a self-proclaimed tinkerer. From Legos to 3-D printers, he has enjoyed learning about engineering both in and out of the classroom. A recent Cornell University College of Engineering graduate, Jeremy has written a book, started his own company, and traveled far to teach children about engineering and sustainable design. Jeremy, who lives in San Francisco, CA, is now working on Google’s Project Glass.—Nan Price, Associate Editor

NAN: When did you start working with electronics?

JEREMY: I’ve been tinkering, in some form or another, ever since I figured out how to use my opposable thumbs. Admittedly, it wasn’t electronics from the offset. As with most engineers, I started with Legos. I quickly progressed to woodworking and I constructed several pieces of furniture over the course of a few years. It was only around the start of my high school career that I realized the extent to which I could express my creativity with electronics and software. I thrust myself into the (expensive) hobby of computer building and even built an online community around it. I financed my hobby through my two companies, which offered computer repair services and video production services. After working exclusively with computer hardware for a few years, I began to dive deeper into analog circuits, robotics, microcontrollers, and more.

NAN: Tell us about some of your early, pre-college projects.

JEREMY: My most complex early project was the novel prosthetic hand I developed in high school. The project was a finalist in the prestigious Intel Science Talent Search. I also did a variety of robotics and custom-computer builds. The summer before starting college, my friends and I built a robot capable of playing “Guitar Hero” with nearly 100% accuracy. That was my first foray into circuit board design and parallel programming. My most ridiculous computer project was a mineral oil-cooled computer. We submerged an entire computer in a fish tank filled with mineral oil (it was actually a lot of baby oil, but they are basically the same thing). 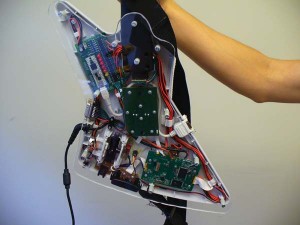 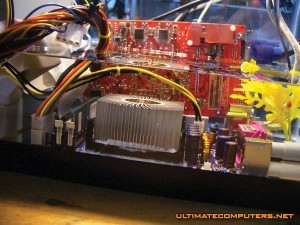 NAN: You’re a recent Cornell University College of Engineering graduate. While you were there, you co-founded Cornell’s PopShop. Tell us about the workspace. Can you describe some PopShop projects? 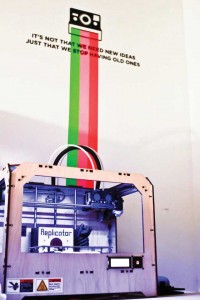 JEREMY: I recently received my Master’s degree in Electrical and Computer Engineering from Cornell University, where I previously received my BS in the same field. During my time at Cornell, my peers and I took it upon ourselves to completely retool the entrepreneurial climate at Cornell. The PopShop, a co-working space that we formed a few steps off Cornell’s main campus, was our primary means of doing this. We wanted to create a collaborative space where students could come to explore their own ideas, learn what other entrepreneurial students were working on, and get involved themselves.

Student startups that work (or have worked) out of the PopShop co-working space include clothing companies, financing companies, hardware startups, and more. Some specific companies include Rosie, SPLAT, LibeTech (mine), SUNN (also mine), Bora Wear, Yorango, Party Headphones, and CoVenture.

NAN: Give us a little background information about Cornell University Sustainable Design (CUSD). Why did you start the group? What types of CUSD projects were you involved with? 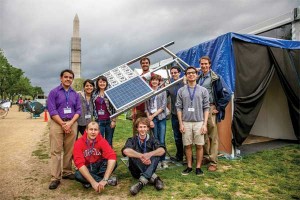 JEREMY: When I first arrived at Cornell my freshman year, I knew right away that I wanted to join a research lab, and that I wanted to join a project team (knowing that I learn best in hands-on environments instead of in the classroom). I joined the Cornell Solar Decathlon Team, a very large group of mostly engineers and architects who were building a solar-powered home to enter in the biannual solar decathlon competition orchestrated by the Department of Energy.

By the end of my freshman year, I was the youngest team leader in the organization.  After competing in the 2009 decathlon, I took over as chief director of the team and worked with my peers to re-form the organization into Cornell University Sustainable Design (CUSD), with the goal of building a more interdisciplinary team, with far-reaching impacts. 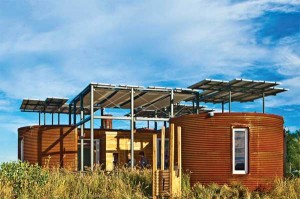 Under my leadership, CUSD built a passive schoolhouse in South Africa (which has received numerous international awards), constructed a sustainable community in Nicaragua, has been the only student group tasked with consulting on sustainable design constraints for Cornell’s new Tech Campus in New York City, partnered with nonprofits to build affordable homes in upstate New York, has taught workshops in museums and school, contributed to the design of new sustainable buildings on Cornell’s Ithaca campus, and led a cross-country bus tour to teach engineering and sustainability concepts at K–12 schools across America. The group is now comprised of students from more than 25 different majors with dozens of advisors and several simultaneous projects. The new team leaders are making it better every day. My current startup, SUNN, spun out of an EPA grant that CUSD won. 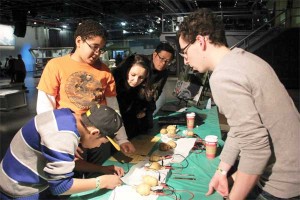 NAN: You spent two years working at MakerBot Industries, where you designed electronics for a 3-D printer and a 3-D scanner. Any highlights from working on those projects?

JEREMY: I had a tremendous opportunity to learn and grow while at MakerBot. When I joined, I was one of about two dozen total employees. Though I switched back and forth between consulting and full-time/part-time roles while class was in session, by the time I stopped working with MakerBot (in January 2013), the company had grown to more than 200 people. It was very exciting to be a part of that.

I designed all of the electronics for the original MakerBot Replicator. This constituted a complete redesign from the previous electronics that had been used on the second generation MakerBot 3-D printer. The knowledge I gained from doing this (e.g., PCB design, part sourcing, DFM, etc.) drastically outweighed much of what I had learned in school up to that point. I can’t say much about the 3-D scanner (the MakerBot Digitizer), as it has been announced, but not released (yet).

The last project I worked on before leaving MakerBot was designing the first working prototype of the Digitizer electronics and firmware. These components comprised the demo that was unveiled at SXSW this past April. This was a great opportunity to apply lessons learned from working on the Replicator electronics and find ways in which my personal design process and testing techniques could be improved. I frequently use my MakerBot printers to produce custom mechanical enclosures that complement the open-source electronics projects I’ve released.

NAN: Tell us about your company, Blum Idea Labs. What types of projects are you working on?

JEREMY: Blum Idea Labs is the entity I use to brand all my content and consulting services. I primarily use it as an outlet to facilitate working with educational organizations. For example, the St. Louis Hacker Scouts, the African TAHMO Sensor Workshop, and several other international organizations use a “Blum Idea Labs Arduino curriculum.” Most of my open-source projects, including my tutorials, are licensed via Blum Idea Labs. You can find all of them on my blog (www.jeremyblum.com/blog). I occasionally offer private design consulting through Blum Idea Labs, though I obviously can’t discuss work I do for clients.

NAN: Tell us about the blog you write for element14.

JEREMY: I generally use my personal blog to write about projects that I’ve personally been working on.  However, when I want to talk about more general engineering topics (e.g., sustainability, engineering education, etc.), I post them on my element14 blog. I have a great working relationship with element14. It has sponsored the production of all my Arduino Tutorials and also provided complete parts kits for my book. We cross-promote each-other’s content in a mutually beneficial fashion that also ensures that the community gets better access to useful engineering content.

NAN: You recently wrote Exploring Arduino: Tools and Techniques for Engineering Wizardry. Do you consider this book introductory or is it written for the more experienced engineer?

JEREMY: As with all the video and written content that I produce on my website and on YouTube, I tried really hard to make this book useful and accessible to both engineering veterans and newbies. The book builds on itself and provides tons of optional excerpts that dive into greater technical detail for those who truly want to grasp the physics and programming concepts behind what I teach in the book. I’ve already had readers ranging from teenagers to senior citizens comment on the applicability of the book to their varying degrees of expertise. The Amazon reviews tell a similar story. I supplemented the book with a lot of free digital content including videos, part descriptions, and open-source code on the book website.

NAN: What can readers expect to learn from the book?

JEREMY: I wrote the book to serve as an engineering introduction and as an idea toolbox for those wanting to dive into concepts in electrical engineering, computer science, and human-computer interaction design. Though Exploring Arduino uses the Arduino as a platform to experiment with these concepts, readers can expect to come away from the book with new skills that can be applied to a variety of platforms, projects, and ideas. This is not a recipe book. The projects readers will undertake throughout the book are designed to teach important concepts in addition to traditional programming syntax and engineering theories.

NAN: I see you’ve spent some time introducing engineering concepts to children and teaching them about sustainable engineering and renewable energy. Tell us about those experiences. Any highlights?

JEREMY: The way I see it, there are two ways in which engineers can make the world a better place: they can design new products and technologies that solve global problems or they can teach others the skills they need to assist in the development of solutions to global problems. I try hard to do both, though the latter enables me to have a greater impact, because I am able to multiply my impact by the number of students I teach. I’ve taught workshops, written curriculums, produced videos, written books, and corresponded directly with thousands of students all around the world with the goal of transferring sufficient knowledge for these students to go out and make a difference.

Here are some highlights from my teaching work: 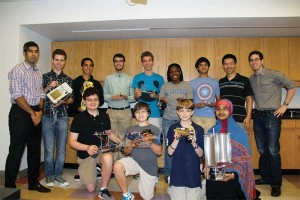 I taught BlueStamp Engineering, a summer program for high school students in NYC in the summer of 2012. I also guest-lectured at the program in 2011 and 2013.

I co-organized a cross-country bus tour where we taught sustainability concepts to school children across the country. 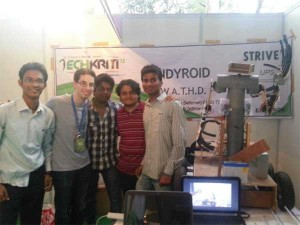 I was invited to speak at Techkriti 2013 in Kanpur, India. I had the opportunity to meet many students from IIT Kanpur who already followed my videos and used my tutorials to build their own projects.

Blum Idea Labs partnered with the St. Louis Hacker Scouts to construct a curriculum for teaching electronics to the students. Though I wasn’t there in person, I did welcome them all to the program with a personalized video. 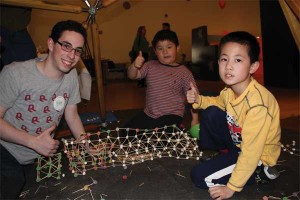 Through CUSD, I organized multiple visits to the Brooklyn Children’s Zone, where my team and I taught students about sustainable architecture and engineering. 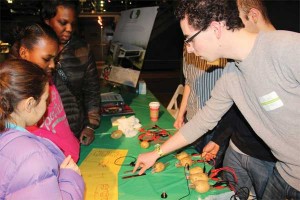 NAN: Speaking of promoting engineering to children, what types of technologies do you think will be important in the near future?

JEREMY: I think technologies that make invention more widely accessible are going to be extremely important in the coming years. Cheaper tools, prototyping platforms such as the Arduino and the Raspberry Pi, 3-D printers, laser cutters, and open developer platforms (e.g., Android) are making it easier than ever for any person to become an inventor or an engineer.  Every year, I see younger and younger students learning to use these technologies, which makes me very optimistic about the things we’ll be able to do as a society.