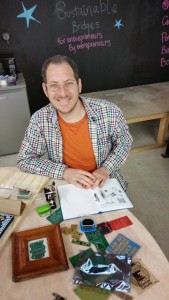 The Art of Electronics is a book that’s well-known by many electronic engineers all over the world. Written by Horowitz and Hill, the first edition was published in 1980 and recently, in 2015, a third edition was released. Over the past 35 years, the book has been an inspiration and resource for many engineers eager to learn about the art of designing with electronics. But there is also a real art of electronics. To discover what that is, I traveled to London to meet up with Saar Drimer. His workplace was in one of the characteristic arches underneath London Bridge Station. With the constant rumble of the trains arriving and pulling out of the station in the background, he showed me some of his work.

SOMETHING COMPLETELY DIFFERENT
Drimer’s designs are completely different from what we usually see on PCBs. Where most of our designs end up as small rectangles with only a few holes for the assembly screws, his boards take different shapes. Some are swirly, sometimes animal-like. At other times, he integrates components right into the board in special holes, as you can see in his Tiny Engineer Superhero Emergency Kit. Often there is no straight copper line to be found; they go all over the place and are a vital part of the total design. 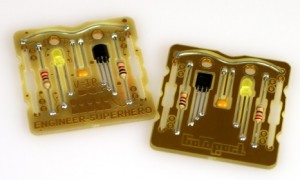 A PCB designed by Drimer asks for exposure and can be interesting for art’s sake only, but also for marketing purposes where drawing attention and presenting a surprise is required. One of his designs even features in the women’s magazine Marie Claire!

DESIGNING THE OTHER WAY AROUND
Where many of us try to put all the PCB and wiring in a (mostly) gray box and leave it out of sight, Drimer is doing exactly the opposite: he is trying to expose it. His end product is the PCB and that is where his art comes into the picture—in many exciting formats. In many ways, Saar is an engineer like many of us. He is extremely knowledgeable about electronics and designing. But when it comes to the latter, he is using unorthodox methods. Where we start with the schematics, Drimer starts with the form and shape of the final PCB—basically, he designs the other way around!

Working and designing in the opposite direction is not easy with existing PCB CAD programs like Eagle or Altium. They all start with a schematic and are using component libraries routing the final layout in the most effective or smallest footprint PCB. Their rigid, straightforward approach is excellent when designing for just another rectangle PCB. But if you want new and creative designs, you need to think of a different way of working and using other tools. If you want to change the way of thinking and designing, you need to be able to use free forms and the routing cannot be left to the CAD program. And that is exactly what Drimer is doing.

THE CRAFTSMAN’S TOOL
To be able to start with a different type of design, Drimer was left with no choice but to start developing his own PCB CAD design program. Unlike most of us who call ourselves “engineer,” Drimer calls himself ”craftsman”—and as a true craftsmen, he makes his own tools. PCBmodE is Drimer’s custom PCB CAD program. The “mod” in PCBmodE has a double meaning, Drimer explained. “The first is short for ‘modern’ in contrast to tired, old EDA tools. The second is a play on the familiar ‘modifications,’ or ‘mods,’ done to imperfect PCBs. Call it ‘PCB mode’ or ‘PCB mod E’, whichever you prefer,” he said.
PCBmodE is a PCB design Python script that creates an SVG from JSON input files. It then creates Gerber (the standard software to describe the PCB images: copper layers, soldering mask, legend, etc.) and Excellon files for manufacturing. With no graphical interface, PCBmodE enables you to place any arbitrary shape on any layer because it is natively vector-based. Most of the design is done in a text editor with viewing and some editing (routing) completed with Inkscape. (Inkscape is a professional vector graphics editor for Windows, Mac OS X, and Linux. It’s free and open source.) On his website, Drimer explains how to work with the program.

“PCBmodE was originally conceived as a tool that enables the designer to precisely define and position design elements in a text file, and not through a GUI. For practical reasons, PCBmodE does not have a GUI of its own, and uses an unmodified Inkscape for visual representation and some editing that cannot practically be done textually,” said Drimer.

A typical PCBmodE design workflow is as follows:

If you want to give PCBmodE a try, simply download it at www.pcbmode.com. It works with Linux, but Drimer is interested in results on other OS platforms as well. For starters, a “hello solder” design is currently available. 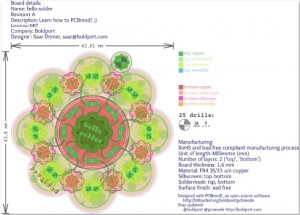 THE CRAFTSMAN’S WORK
Examples of Drimer’s work are posted on his website, www.boldport.com. I especially like the Tiny Engineer Superhero Emergency Kit’ design where the components are integrated into the PCB itself resulting in a very flat design. You will also notice he is not using straight lines and angles for the traces. It is more of a pencil drawing; the traces flow along the lines of the PCB and components.

You might ask why on earth someone would put so much effort into all of this? Don’t ask! But, if you like, here are a few answers. First, because it is an art. Second, it is Drimer’s full-time job and he hopes to expand the business. And third, working differently from the norm tends to generate fresh ideas and exciting solutions—and that is what we need more of.