Circuit Cellar’s January issue presents several microprocessor-based projects that provide useful tools and, in some cases, entertainment for their designers.

Our contributors’ articles in the Embedded Applications issue cover a hand-held PIC IDE, a real-time trailer-monitoring system, and a prize-winning upgrade to a multi-zone audio setup.

Jaromir Sukuba describes designing and building the PP4, a PIC-to-PIC IDE system for programming and debugging a Microchip Technology PIC18. His solar-powered, 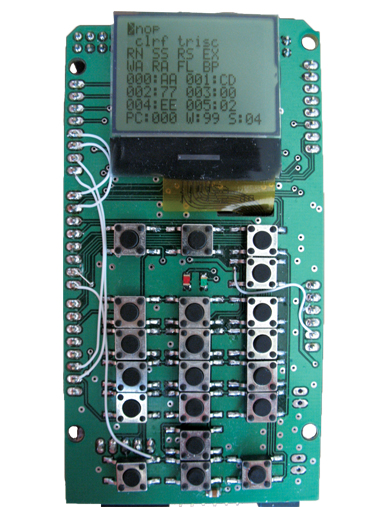 “While other popular solutions can overshadow this device with better UI and OS, none of them can work with 40 mW of power input and have fully in-house developed OS. They also lack PP4’s fun factor,” Sukuba says. “A friend of mine calls the device a ‘camel computer,’ meaning you can program your favorite PIC while riding a camel through endless deserts.”

Not interested in traveling (much less programming) atop a camel? Perhaps you prefer to cover long distances towing a comfortable RV? Dean Boman built his real-time trailer monitoring system after he experienced several RV trailer tire blowouts. “In every case, there were very subtle changes in the trailer handling in the minutes prior to the blowouts, but the changes were subtle enough to go unnoticed,” he says.

Boman’s system notices. Using accelerometers, sensors, and a custom-designed PCB with a Microchip Technology PIC18F2620 microcontroller, it continuously monitors each trailer tire’s vibration and axle temperature, displays that information, and sounds an alarm if a tire’s vibration is excessive.  The driver can then pull over before a dangerous or trailer-damaging blowout.

But perhaps you’d rather not travel at all, just stay at home and listen to a little music? This issue includes Part 1 of Dave Erickson’s two-part series about upgrading his multi-zone home audio system with an STMicroelectronics STM32F100 microprocessor, an LCD, and real PC boards. His MCU-controlled, eight-zone analog sound system won second-place in a 2011 STMicroelectronics design contest.

In addition to these special projects, the January issue includes our columnists exploring a variety of  EE topics and technologies.

Jeff Bachiochi considers RC and DC servomotors and outlines a control mechanism for a DC motor that emulates a DC servomotor’s function and strength. George Novacek explores system safety assessment, which offers a standard method to identify and mitigate hazards in a designed product.

Ed Nisley discusses a switch design that gives an Arduino Pro Mini board control over its own power supply. He describes “a simple MOSFET-based power switch that turns on with a push button and turns off under program control: the Arduino can shut itself off and reduce the battery drain to nearly zero.”

“This should be useful in other applications that require automatic shutoff, even if they’re not running from battery power,” Nisley adds.

“I believe 3-D technology will be especially promising in the mobile domain,” she adds, “where the data access and processing requirements increase continuously, but the power constraints cannot be pushed much because of the physical and cost-related constraints.”