As I walked the convention center floor at the 2012 Design West conference in San Jose, CA, it quickly became clear that measurement and sensor technologies are at the forefront of embedded innovation. For instance, at the Terasic Technologies booth, I spoke with Allen Houng, Terasic’s Strategic Marketing Manager, about the VisualSonic Studio project developed by students from National Taiwan University. The innovative design—which included an Altera DE2-115 FPGA development kit and a Terasic 5-megapixel CMOS sensor (D5M)—used interactive tokens to control computer-generated music. Sensor technology figured prominently in the design. It was just one of many exciting projects on display.

In this issue, we feature articles on a variety of measurement-and sensor-related embedded design projects. I encourage you to try similar projects and share your results with our editors.

Starting on page 14, Petre Tzvetanov Petrov describes a multilevel audible logical probe design. Petrov states that when working with digital systems “it is good to have a logical probe with at least four levels in order to more rapidly find the node in the circuit where things are going wrong.” His low-cost audible logical probe indicates four input levels, and there’s an audible tone for each input level.

Matt Oppenheim explains how to use touch sensors to trigger audio tags on electronic devices (p. 20). His design is intended to help visually impaired users. But you can use a few capacitive-touch sensors with an Android device to create the application of your choice. 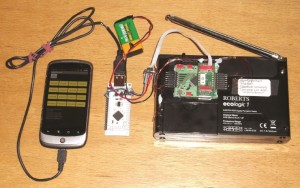 The portable touch-sensor assembly. The touch-sensor boards are mounted on the back of a digital radio, connected to a IOIO board and a Nexus One smartphone. The Android interface is displayed on the phone. (Source: M. Oppenheim)

Read the interview with Lawrence Foltzer on page 30 for a little inspiration. Interestingly, one of his first MCU-based projects was a sonar sensor.

The impetus for Kyle Gilpin’s “menU” design was a microprocessor-based sensor system he installed in his car to display and control a variety of different sensors (p. 34). 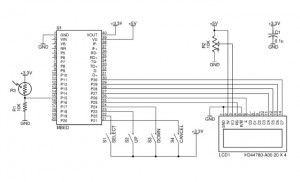 The design used to test the menU system on the mbed processor was intentionally as simple as possible. Four buttons drive the menu system and an alphanumeric LCD is used to display the menu. Alternatively, one can use the mbed’s USB-to-serial port to connect with a terminal emulator running on a PC to both display and control the menu system. (Source: K. Gilpin)

The current menU system enables Gilpin to navigate through a hierarchical set of menu items while both observing and modifying the parameters of an embedded design. 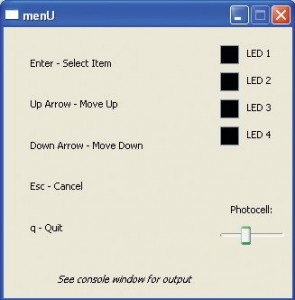 The menU system is generic enough to be compiled for most desktop PCs running Windows, OSX, or Linux using the Qt development framework. This screenshot demonstrates the GUI for the menU system. The menu itself is displayed in a separate terminal window. The GUI has four simulated LEDs and one simulated photocell all of which correspond to the hardware available on the mbed processor development platform. (Source: K. Gilpin)

Lastly, I’m excited to announce that we have a new columnist, Patrick Schaumont, whose article “One-Time Passwords from Your Watch” starts on page 52. 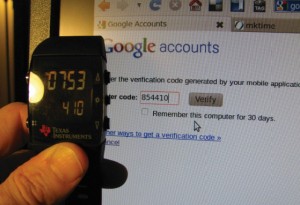 The Texas Instruments eZ430 Chronos watch displays a unique code that enables logging into Google’s Gmail. The code is derived from the current time and a secret value embedded in the watch. (Source: P. Schaumont)

Schaumont is an Associate Professor in the Bradley Department of Electrical and Computer Engineering at Virginia Tech. His interests include embedded security, covering hardware, firmware, and software. Welcome, Patrick!