Circuit Cellar‘s editorial staff endeavors to publish accurate information. When mistakes are made, the staff will note them on this page and include corrections.

If you think a mistake was published in Circuit Cellar, please send your comments and suggestions to editor@circuitcellar.com.

A reader noticed an error in the schematic Figure 5 on page 9 in the article “Machine Vision Random Number Generator Using the Raspberry Pi” by Devlin Gualtieri. The 2N3906 transistor is flipped–the emitter should be connected to the +5V supply and the collector should be connected to the LED current-limiting resistors and LCD back light circuit. The transistor is correctly connected on the PCB layout (Figure 6).

Circuit Cellar reader Robert Grappel commented on Robert Lacoste’s article, “Simulate and Design a Switched-Capacitor Filter.” I just read your article “Simulate and Design a Switched-Capacitor Filter” in the August 2013 issue of Circuit Cellar. It certainly caused me a certain sense of ‘deja vu’. Back in February of 1978, I had written an article in BYTE magazine entitled “A Simple Digital Filter” where I derived the design and software for R-C high and low-pass filters to run on a Motorola 6800 (8-bit processor) at a clock rate of only 1 MHz! (Makes me feel very old!) You can still find a copy of my article on the web at: www.piclist.com/techref/new/letter/news0405.htm where someone has added additional coding for the SX processor. I had based my software implementation on earlier work by Ira Chayut published in the September 1976 issue of BYTE.

The editors at McGraw Hill thought enough of my article that they invited me to contribute a chapter on digital filtering to a book on microprocessor applications. This was cited in a patent: E.D.N. ELECTRICAL DESIGN NEWS, vol. 27, no. 21, 27th October 1982, pages 213-216,219-220, McGraw-Hill, Boston, Massachusetts, US; R.D. GRAPPEL: “Optimize digital-filter operation by evaluating software tradeoffs.”

An error appeared in a schematic published on p. 69 of Jeff Bachiochi’s article “Build a MIDI Communication Device (Part 2): MIDI Output.” The correct schematic appears below. 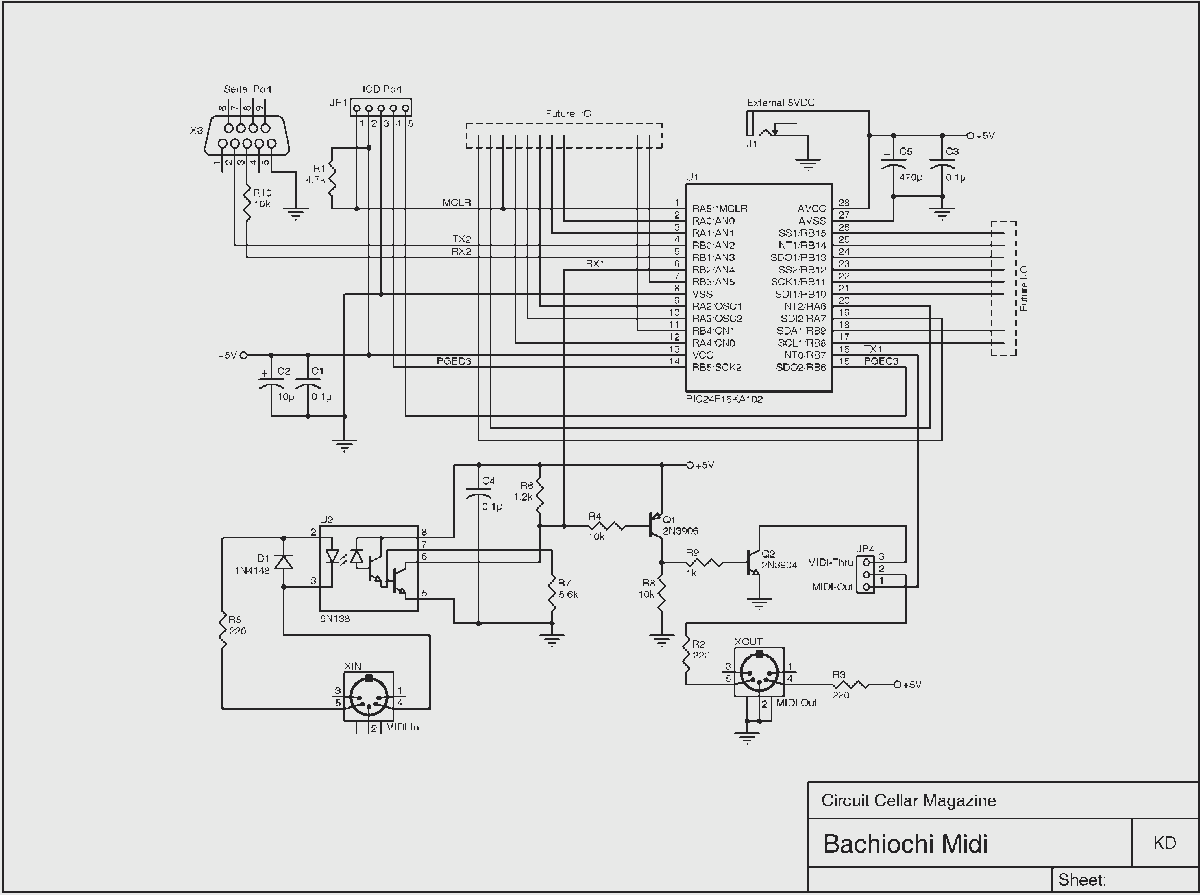 I really enjoyed your latest article on IIR filters in the October issue of Circuit Cellar 2012. I really think you did an amazing job at making it “understandable” and I got it. Thanks a lot.

I did find a few typos however in a couple equations (at least I am pretty sure that they are typos). In equation 9, the last term (Vo(n)) should be outside of the square bracket. And for equation 10, the value of a, the last term should probably be “Delta_T^2” and not “Delta_T2^2.”

Once again, thanks for a great article.

Robert Lacoste and the editorial staff thank Coulliard for pointing out the errors.

A reader found a mistake in George Martin’s article, “Switch Debouncing: Interfacing to a Simple Serial Device.” He  noted that Figure 2  (p. 62) includes the statement: “Is switch counter > MAX_LIMIT?” He then asked: What is supposed to happen if the answer is “No”? The answer is fairly obvious, but not shown in the Figure.  Is this a limitation of your UML charting software? Martin responded: Good catch. A missing link. You should just exit the routine.

A dedicated reader brought to our attention an error in a schematic (Figure 2) that appeared in Kevin Gorga’s Circuit Cellar June 2012 article. “AC Tester.” The edit shown below was contributed by Circuit Cellar reader Paul Alciatore: 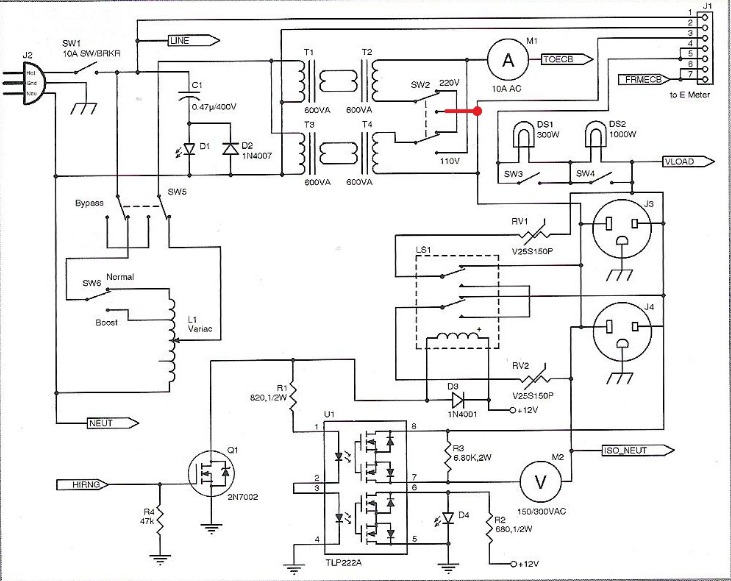 The error was made by the editorial staff, not the author. Along with the edited schematic, Alciatore wrote:

While reading this interesting article I noticed an apparent error in the schematic diagram in figure 2.  The text states that the switch, SW2, allows the two transformer windings to be placed either in series for 220 V or in parallel for 110 V with higher current.  As shown, the series position does work, but the parallel selection does not.  In the parallel position only T4 is in use: T2 is disconnected.  The author’s schematic was probably correct but it looks like a line was omitted when it was copied for publication.  I have attached what I believe is a corrected schematic.

◊ Inside This Issue