This article will describe the hardware and software design and implementation of a low-power, wireless RF data link. We will discuss a robotic application in which the RF link facilitates the command and control functions of a tele-operated miniature robot. The RF Monolithics (RFM) TR-3000 chip is the core of the transceiver design. We use a straightforward interface to a PIC controller, so you should be able to use or adapt much of this application for your needs… 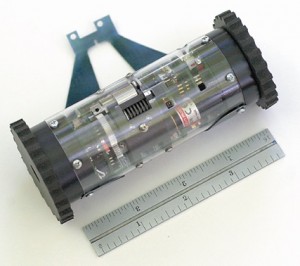 Photo 1: The robot measures a little over 4″. Designed for teleoperated remote surveillance, it contains a video camera and transmitter. Scout can hop over obstacles by hoisting its tail spring (shown extended) and quickly releasing it to slap the ground and propel the robot into the air.

The robot, called Scout, is packed in a 38-mm diameter tube with coaxial-mounted wheels at each end, approximately 110-mm long. The robot is shown in Photo 1. (For additional information, see the “Key Specifications for Scout Robot” sidebar.) Scout carries a miniature video camera and video transmitter, allowing you to tele-operate the robot by sending it steering commands while watching video images sent back from Scout. The video transmitter and data transceiver contained on the robot are separate devices, operating at 915 and 433MHz, respectively. Also contained on Scout are dual-axis magnetometers (for compass functions) and dual-axis accelerometers (for tilt/inclination measurement). 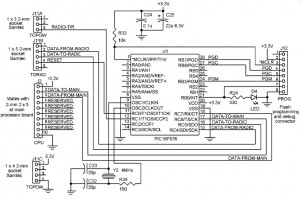 Figure 1: For the radio processor board, a PIC16F877 provides the horsepower to perform transceiver control, Manchester encoding, and packet formatting.

Scout’s hardware and software were designed to be modular. The wireless data link is physically partitioned onto two separate boards, one containing a PIC processor for radio control, message formatting, and data encoding (see Figure 1). The other board contains the RF hardware, consisting of the RFM TR3000 chip and supporting discrete components. By separating the two boards, we were able to keep the digital noise and trash away from the radio.