Intersil Corp. recently introduced the TW9992 analog video decoder, which features an integrated MIPI-CSI2 output interface that provides compatibility with the newest SoC processors. The decoder’s MIPI-CSI2 interface simplifies design by making it easier to interface with SoCs, while also lowering the system’s EMI profile. The TW9992 decoder takes both single-ended and differential composite video inputs from a vehicle’s backup safety camera, and is the latest addition to Intersil’s video decoder product family for automotive applications. 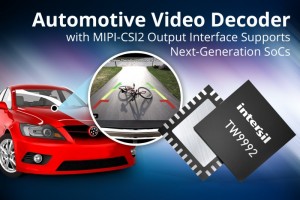 Designed with built-in diagnostics and superior video quality, the TW9992 addresses the biggest challenges faced by automotive video systems. For example, the decoder’s Automatic Contrast Adjustment (ACA) image enhancement feature overcomes a major challenge for backup camera systems by adapting to rapidly changing lighting conditions. ACA is able to automatically boost up or reduce the brightness/contrast of an image for greater visibility and safety.

The automotive-grade TW9992 analog video decoder is available in a 32-pin wettable flank QFN package. It costs $3 in 1,000-piece quantities.