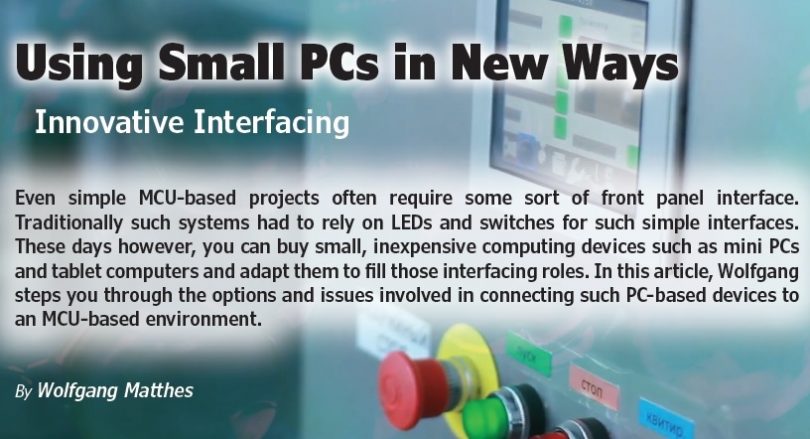 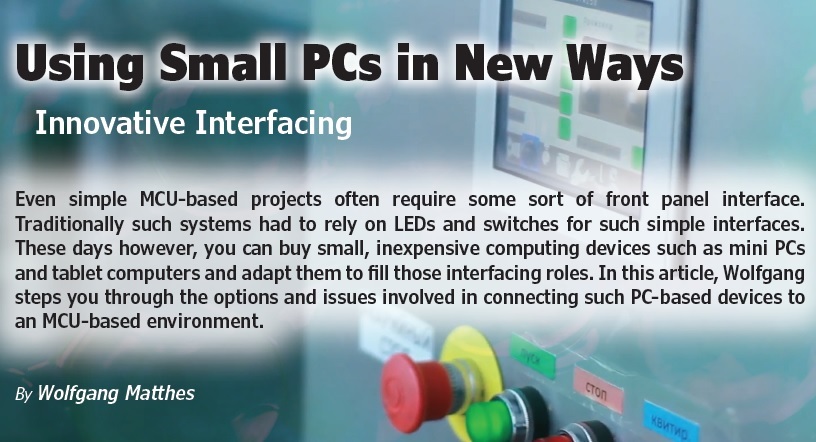 Even simple MCU-based projects often require some sort of front panel interface. Traditionally such systems had to rely on LEDs and switches for such simple interfaces. These days however, you can buy small, inexpensive computing devices such as mini PCs and tablet computers and adapt them to fill those interfacing roles. In this article, Wolfgang steps you through the options and issues involved in connecting such PC-based devices to an MCU-based environment.

More often than not, even a humble project—done for educational, tinkering or just for fun—needs some way to display something and to allow for operator interaction. That means contemplating how best to craft an operator console, a control panel, a display assembly or how to set up a testbed and the like. Solderless breadboards, jumper wire and the ubiquitous small modules were the traditional tools for such efforts—in the past there was no other way than to build real hardware from scratch.

It goes without saying that today’s state-of-the-art technology is characterized by computers with touchscreens and the like. Simply run your favorite flight simulator and compare the cockpits of an old Super Constellation or F-86 aircraft to the cockpits of a Boeing 777 or an F-22. In down-to- earth projects, it is quite natural to think of industrial-grade hardware—industrial PCs, embedded PCs and so on. But those can be way too expensive for our low-budget projects. That’s why we think about using small, inexpensive personal computers (PCs). This topic is best clarified through photos. With that in mind, besides what’s in this article, more photos can be found on Circuit Cellar’s article materials webpage.

Figure 1 shows some devices that are essentially basic display and control panels. In most educational, tinkering or fun projects, it’s not practical to spend a lot of time and money to design and build impressive assemblies and panels. More often than not, the problem is solved by more or less sloppy tinkering. In contrast, the devices shown here are somewhat more advanced. They are still jerry-built, but they are crafted with sturdiness as a main objective.

Figure 2
Each of these basic control panels support eight digital outputs operated via toggle switches, and eight inputs whose levels are indicated by LEDs or on an LCD display.

Figure 2 shows three boxes that are basic control panels, each supporting eight inputs and eight outputs. While the device to the left is clearly jerry-built, the two other devices are the result of meticulous mechanical design—they were conducted as experiments (and student assignments) with an intentional disregard of cost. Figure 3 shows the interior of the most sophisticated of the control panels. It supports signal levels between 2.5 V and 24 V, remote operation via the USB and an LCD display. Under program control, it can be operated as a small quasi-static digital tester. When you need more than eight inputs or outputs, attach two or more panels via a USB or serial hub.

Figure 3
The interior of the somewhat more advanced (and expensive) control panel—the result of an exercise in mechanical and PCB design. The ribbon cables connect only the pin headers in the front panel. The PCBs are stacked one above the other, thereby avoiding cables or wiring harnesses.

It goes without saying that such a device is not that cheap. The bill-of-materials (BOM) cost alone could pay for more than one small tablet PC running Windows. Figure 4 shows an 8″ tablet in a purpose-built frame, attached to a test rig and two 7″ tablets in a 19″, 3U subrack. In contrast, those devices are considerably less expensive than the apparatus shown in Figure 3.

Figure 4
These are examples of small Windows tablets adapted to serve as operator consoles, diagnostic displays and testbed controllers.

Employing a PC requires programming skills, but no special craftsmanship or a workshop full of tools. Yes, writing and debugging programs may be challenging. But it’s a lot more forgiving than a mechanical interface where you could accidently turn a front panel into scrap metal, simply due to a misplaced hole or dealing with mismatched connections that only show up when you’re fitting the parts together. …