In some ways, Salish Kootenai College (SKC)  based in Pablo, MT, and Penn State Erie, The Behrend College in Erie, PA, couldn’t be more different

SKC, whose main campus is on the Flathead Reservation, is open to all students but primarily serves Native Americans of the Bitterroot Salish, Kootenai, and Pend d’Orellies tribes. It has an enrollment of approximately 1,400. Penn State Erie has roughly 4,300.

But one thing the schools have in common is enterprising employees and students who recognized a problem on their campuses and came up with technical solutions. Al Anderson, IT director at the SKC, and Chris Coulston, head of the Computer Science and Software Engineering department at Penn State Erie, and his team have written articles about their “campus solutions” to be published in upcoming issues of Circuit Cellar.

In the summer of 2012, Anderson and the IT department he supervises direct-wired the SKC dorms and student housing units with fiber and outdoor CAT-5 cable to provide students better  Ethernet service. 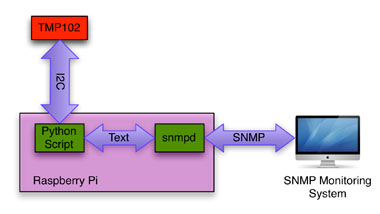 “Prior to this, students accessed the Internet via a wireless network that provided very poor service.” Anderson says. “We wired 25 housing units, each with a small unmanaged Ethernet switch. These switches are daisy chained in several different paths back to a central switch.”

To maintain the best service, the IT department needed to monitor the system’s links from Intermapper, a simple network management protocol (SNMP) software. Also, the department had to monitor the temperature inside the utility boxes, because their exposure to the sun could cause the switches to get too hot. 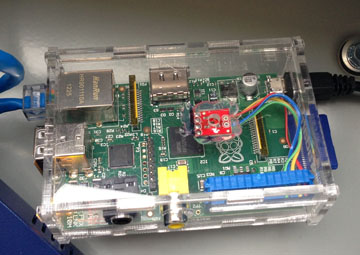 This is the final installation of the Raspberry Pi in the SKC system. The clear acrylic case can be seen along with the TMP102 glued below the air hole drilled into the case. A ribbon cable was modified to connect the various pins of the TMP102 to the Raspberry Pi.

“It has worked flawlessly, and made it through the hot summer fine,” Anderson said recently. “We designed it with robustness in mind.”

Meanwhile, Chris Coulston, head of the Computer Science and Software Engineering department at Penn State Erie, and his team noticed that the shuttle bus 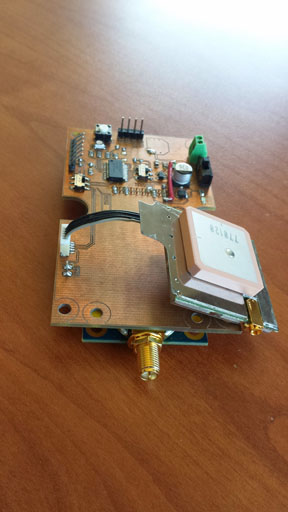 The mobile unit to be installed in the bus.

introduced as his school expanded had low ridership. Part of cause was the unpredictable timing of the bus, which has seven regular stops but also picks up students who flag it down.

“In order to address the issues of low ridership, a team of engineering students and faculty constructed an automated vehicle locator (AVL), an application to track the campus shuttle and to provide accurate estimates when the shuttle will arrive at each stop,” Coulston says.

The system’s three main hardware components are a user’s smartphone; a base station on campus; and a mobile tracker that stays on the traveling bus.

Coulston and his team completed a functional prototype by the time classes started in August. As a result, a student can call up a bus locater web page on his smartphone. The browser can load a map of the campus via the Google Maps JavaScript API, and JavaScript code overlays the bus and bus stops. You can see the bus locater page between 7:40 a.m. to 7 p.m. EST Monday through Friday.

“The system works remarkably well, providing reliable, accurate information about our campus bus,” Coulston says. “Best of all, it does this autonomously, with very little supervision on our part.  It has worked so well, we have received additional funding to add another base station to campus to cover an extended route coming next year.” 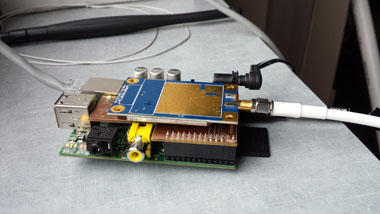 The base station for the mobile tracker is a sandwich of Raspberry Pi, interface board, and wireless modem.

And while the system has helped Penn State Erie students make it to class on time, what does Coulston and his team’s article about it offer Circuit Cellar readers?

“This article should appeal to readers because it’s a web-enabled embedded application,” Coulston says. “We plan on providing users with enough information so that they can create their own embedded web applications.”

Look for the article in an upcoming issue. In the meantime, if you have a DIY wireless project you’d like to share with Circuit Cellar, please e-mail editor@circuitcellar.com.