Percepio AB recently released Tracealyzer 3.1, which is a trace tool that supports RTOS trace using just a standard USB cable. You can increase your development speed by using Tracealyzer for debugging, validation, profiling, documentation, and training. 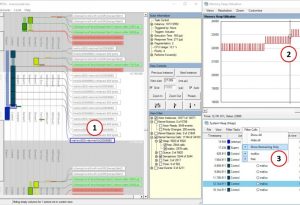 The trace recorder library is now easier to configure for streaming over custom interfaces, and includes support for USB streaming on STM32. (It can be adapted for other microcontrollers.) USB offers excellent performance for RTOS tracing and over 600 KB/s has been measured on an STM32 using USB 2, several times more than required. Other stream ports include TCP/IP and SEGGER J-Link debug probes. Tracealyzer 3.1 can also receive trace streams via Windows COM ports (e.g., from USB CDC connections), UART connections, or any virtual COM port provided by other target interfaces.