The goal of this article is to extend the basic hand-held current measurement range from milliamps down into the nanoamp and picoamp range with relatively simple, low-cost circuits. First, I’ll describe several types of current sources with their relevant performance characteristics that affect measurement circuits. Then, I’ll present practical circuits that deliver high performance at low cost. Each of these circuits will be analyzed to determine what level of measurement performance can be expected. General design issues common to all of the circuit techniques will also be discussed and recommended circuit component and layout techniques will be provided. Finally, two of the circuits will be discussed that were built and tested to demonstrate the desired goal of measuring nanoamp and picoamp currents.

Figure 1 shows several types of current sources. Figure 1a is the symbol of what electrical engineers call an ideal current source. It can have any level of current at the output and the output impedance is infinite. The result is that the output current is not affected at all by the characteristics of the measurement circuit. Of course no actual current source is ideal, but this is still a useful concept for approximating actual circuits and is used as a source in circuit simulation programs such as PSPICE. 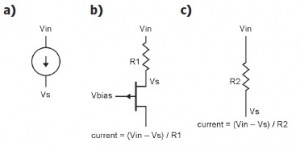 Figure 1: The current sources: ideal (a), semiconductor (b), and resistive (c)

Figure 1b shows a current source which uses semiconductor transistors (either bipolar or FET). In this circuit, the output impedance is not infinite but can still be quite high (megohms). This means that varying voltages at the collector of the bipolar transistor or drain of the FET transistor have little effect on the output current as long as the voltage is not large enough to affect transistor operation.

Figure 1c is the least ideal of the current sources. The current is generated by the voltage difference across the resistor R2. Any measurement voltage developed by the measurement circuit directly affects the voltage difference across the source resistor. This changes the current that is measured which can result in measurement error. Having said that, Keithley Instruments in Low Level Measurements Handbook (6th edition, page 2-20) uses this current source model in defining what they call the feedback ammeter (also transimpedance amplifier). It may well be that, in real-world circuits, this model is the one that describes the majority of practical applications.

Figure 2 and Figure 3 show several circuit techniques which are used to convert current to a voltage. Figure 2 shows the basic techniques, while Figure 3 shows modifications to two of these basic circuits, which give more accurate results and extend the measurement range. The symbol for the input current used in these circuits is the same as the symbol for the ideal current source used in Figure 1; but in this case, it is used to show where the input current connects to the measurement circuit and can represent any of the described current sources. 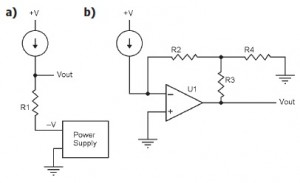 Most hand-held meters have a 10-MΩ input impedance on the voltage scale. The load resistor R1 will be in parallel with the meter impedance and needs to be selected appropriately to give the desired equivalent measurement resistance. An example in Table 1 shows the resistor values needed to give a measurement voltage of 50 mV for the given currents. This fairly low value of measurement voltage significantly decreases the burden voltage while at the same time providing enough voltage to give measurement accuracy on the order of 10%.

When making a current measurement with the resistive circuit, it is always a good idea to try several resistors of different values to see what voltage results. If changing resistor values by a certain amount changes the measurement voltage by the same amount, then the source current is not being affected by the measurement (burden) voltage. In this case you can use the higher value of resistance to get more output voltage and more measurement accuracy. Conversely, if the corresponding measurement voltage increases less than the amount of the resistor value change, the source current is being affected by the measurement circuit and the smaller resistor value should be used.
A small modification to the circuit as shown in Figure 3a gives improved performance by removing the burden voltage at the expense of adding a variable power supply. This can be particularly useful as a quick measurement tool using an available workbench power supply. The power supply is adjusted until VOUT is 0 V. The value of the current is then obtained by dividing the measured value of the power supply voltage by the resistance R1. In this way the burden voltage is removed and the load resistor can be increased so that the power supply voltage can be greater than 50 mV. This will give more accuracy in the measurements.
Because VOUT is zero, the leakage current going into the hand-held voltmeter is zero and the finite input impedance (10 MΩ) of the meter does not affect the measurement. Even when VOUT is not exactly zero, the leakage current is still small. For example, for VOUT < 5 mV, the leakage current will be less than 500 pA. This gives measurement accuracy of 1% or better for input currents greater than 50 nA. Since the resistor R1 in this modified circuit is not developing a burden voltage, the resistor value is decoupled from the input current and can be any practical value depending only on the maximum voltage of the power supply.