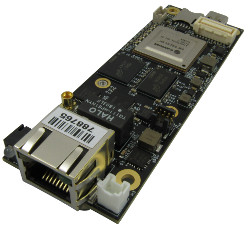 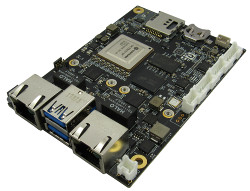 While the Newport GW6300 and GW6400 both offer a choice of dual- (800MHz) or quad-core (1.5GHz) Octeon TX configurations, the GW6100 and GW6200 are limited to the 800MHz dual-core models. Volume orders are required to switch to the quad-core SoC or make other customizations, including boosting the standard 1GB DDR4 to up to 4GB or the standard 8GB eMMC to up to 64GB.

The Newport GW6100 and GW6200 provide OpenWrt or Ubuntu Linux BSPs with U-Boot. A full development kit is available with a power supply, passive PoE injector, JTAG programmer, and cables.

The tiny new GW6100 offers 1GB DDR4, 8GB eMMC, and a GbE port with PoE support. You can also draw power from the USB Type-C port, and there’s a JTAG connection and an I/O connector. The latter offers serial, analog, and digital I/O, as well as I2C, SPI, and power.

GW6100 rear detail view
(click image to enlarge)
Like all the Newport SBCs, the GW6100 provides standard -40 to 85°C support. There’s an 8-60V DC jack in addition to the PoE, Type-C, and power header options. Other features include reverse power protection, programmable wake-up/shutdown, a watchdog, real-time clock, and more. A Ublox GNSS receiver is optional. 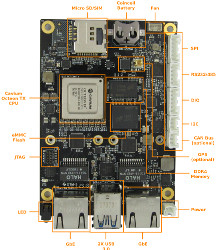 Newport GW6200 detail view (left) and block diagram
(click images to enlarge)
The CW6200 is further equipped with side-mounted connectors for SPI, DIO, I2C, and either 2x RS232 or a single RS232/422/485 interface. A CAN bus controller is optional.