Clive “Max” Maxfield, who received his BSc in Control Engineering from Sheffield Hallam University in England in 1980, began his career designing CPUs for mainframe computers. But he has branched out far beyond that, becoming a prolific writer of engineering books, an EE Times editor, a blogger, and a designer of “interesting stuff,” from silicon chips to Steampunk “Display-O-Meters,” according to his website.

Max, who now lives in Huntsville, AL, recently shared with Circuit Cellar photos and descriptions of some of his ongoing projects and creative workspaces:

I would say that I have three personal workspaces. But before we talk about my workspaces, it might be appropriate to first mention two of my several projects, which vary from artistic to technological. 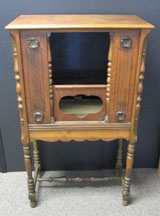 This is the future home of the Prognostication Engine.

One of my projects that is currently in full swing is my Pedagogical and Phantasmagorical Inamorata Prognostication Engine. What do you mean “What’s that when it’s at home?” Isn’t it obvious?

The Prognostication Engine is intended to help me predict my wife’s mood. Will the radiance of her smile fall upon me when I return home from work in the evening?

My Prognostication Engine is going to be housed in a beautiful wooden radio cabinet circa 1929. This is going to feature two brass control panels, both of which are going to be festooned with antique knobs and buttons and switches and analog meters (the ones with the black Bakelite bezels). I’m aiming at a Steampunk “look-and-feel” that would not look out of place in a Victorian setting.

One of the tricks I use when working on this type of project is to first create to-scale Visio drawings of all of the knobs, switches, meter, and so forth, and then I create a full-sized card-and-paper mockup as shown below. This makes it much easier to move things around and experiment with different placements so as to decide on the final layout. 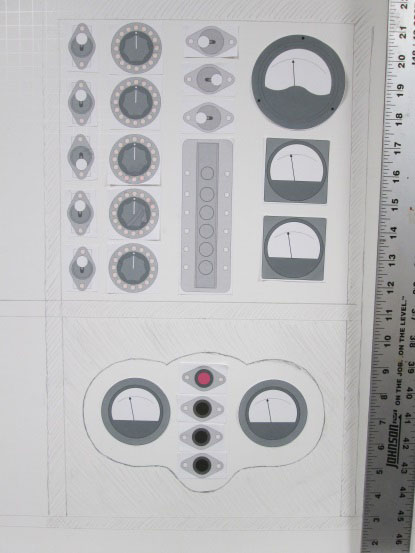 Observe the two small pink dots at the top and bottom of each of the vertically-oriented switches and on either side of the horizontally oriented switches and buttons; also the 16 pink dots around each of the five potentiometers. These are going to be faux mother-of-pearl dots, behind which will be tri-colored LEDs implemented using Adafruit’s individual Flora NeoPixels and NeoPixel Rings, respectively.

Everything is going to be controlled using an Arduino Mega microcontroller development board. Speaking of control, the potentiometers are going to be motorized, so that if an unauthorized operator tries to modify any of the settings, the other potentiometers will automatically change to compensate (later they will all surreptitiously return to their original settings).

Now observe the three black momentary push-buttons located on the lower panel, just under the modestly sized red button (do not press the red button). These equate to gifts of chocolates and flowers and hugs. Judicious use of these buttons increases the chances of happy times; overusing them, however, may trigger the “suspicion of wrongdoing” algorithm. In reality, there’s far too much “stuff” to go into here. Suffice it to say that the large meter in the top right-hand corner of the upper panel will reflect the full range of female emotion, from “Extremely Disgruntled” to “Fully Gruntled” (LOL).

Max has another project, dubbed “BADASS Display,” which was inspired by an item he saw in an electronics boutique-type store—a “really cool 9″ tall, cylindrical Bluetooth loudspeaker, whose outer surface was covered with tri-colored LEDs implementing a sort of spectrum analyzer display.”

Thus was conceived my Bodacious Acoustic Diagnostic Astoundingly Superior Spectromatic (BADASS) display. First of all, I took a look around YouTube to get some ideas. It turns out that there are many different ways to present spectrographic data. For example, check out Gavin Curtis’ “My Big Blue 32 Band Audio Spectrum Analyzer Lady Gaga,”  RGB Styles’s “Coffee Table,” and Techmoan’s “Giant LED Graphic Music Display (DJ Spectrum Analyzer).”

I decided that the first incarnation of my display would boast a 16 x 16 array of tri-colored LEDs. I decided to use Adafruit’s NeoPixel Strips. Once again, I started by creating a cardboard and paper mockup as shown below. 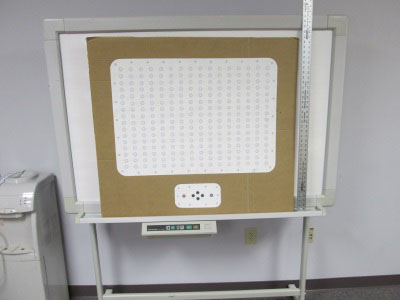 Cardboard and paper mockup of the BADASS Display

The NeoPixel strips I’m using have 30 pixels per meter. I’m mounting these vertically, which means the vertical separation between adjacent pixels is 33.33 mm. To provide some visual interest, I decided to make the horizontal spacing between columns 50 mm, which is 1.5 times the vertical spacing.

In the real version, the cardboard will be replaced by plywood stained to look like expensive old wood. Meanwhile, the main display panel and the smaller control panel will be formed from hardboard painted to look like antique brass. In front of each pixel will be a 1″-diameter brass bezel accompanied by a 1/2″-diameter clear Fresnel lens in the center. The hardboard panels are going to be attached to the plywood panel using brass acorn nuts. Once again, the finished unit is intended to have a Steampunk look and feel.

I’m planning on using an Arduino Mega microcontroller development board to drive the display itself. This will be accompanied by a chipKIT Max32 microcontroller board that will be used to process the stereo audio stream and extract the spectrum data.

Max’s three project work areas include his office, his kitchen table, and his garage:

I would say that my first personal workspace is the Pleasure Dome (my office). Why do I think of this as a personal workspace? Theoretically I work out of a home office. In reality, however, I prefer to rent a room in a building belonging to an engineering company called MaxVision (no relation).

When you cross the office threshold, you enter a small corner of “Max’s World” (where the colors are brighter, the butterflies are bigger, the birds sing sweeter, and the beer is plentiful and cold). One of the walls is lined with wooden bookshelves containing an eclectic mix of science books, technical books, comics, and science fiction and fantasy books and graphic novels. 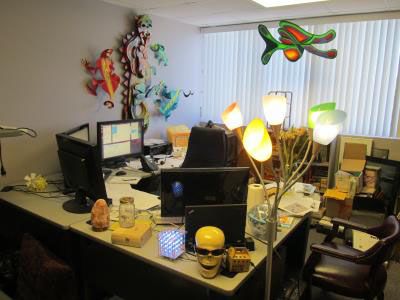 My office is also the repository for all of the antique knobs and switches and analog meters and large vacuum tubes and such that I collect on my travels for use in my projects. Also, I can store (and present) larger objects in the bay outside my office.

My second personal workspace is the kitchen table in the breakfast nook at our home. This is where I tend to implement the electronics portions of my projects. At the far end of the table in the image below we see the jig I constructed to hold the two brass control panels for my Inamorata Prognostication Engine project. On the floor in the right-hand side of the image is the tool box that contains my electronics tools including screwdrivers, snip, and suchlike. It also contains my test equipment in the form of a cheap-and-cheerful multimeter from Amazon, along with an iPad-based oscilloscope and an iPad-based logic analyzer, both from Oscium. 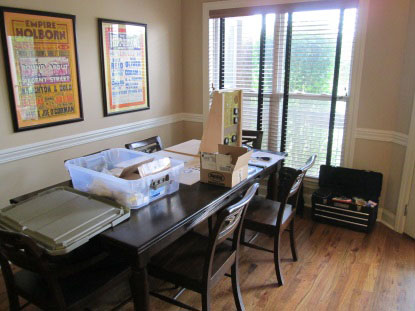 Observe the plastic storage box on the nearside of the table. I have a separate storage box for each of my projects. Anything associated with a project that’s currently under construction is stored in that project’s box, including any notes I’ve made, any electronic components and their datasheets, and any mechanical parts such as nuts and bolts.


I tend to gather everything associated with a particular function or sub-unit together into smaller boxes or plastic Ziploc bags. In the case of my motorized potentiometers, for example, I have the potentiometers along with the appropriate nuts, washers, antique knobs and suchlike all gathered together. I cannot tell you how much time and frustration a bit of organization like this saves you in the long run. It also make it much easier to pack everything up when my wife, Gina, informs me that she needs the table cleared.

Below we see another view of the test jig I constructed to hold the two brass panels for the Prognostication Engine. Creating this jig only took an hour or so, but it makes life so much easier with regard to assembling the electronics and accessing everything while I’m in the prototyping and software experimentation phase of the project.

The test jig for the Prognostication Engine on the kitchen table

Max’s third personal workspace is his garage. When his family’s three vehicles are parked inside, his projects are packed away in a corner, including tools and tiles for a mosaic he is creating that will feature ceramic tiles fired in his recently purchased kiln. 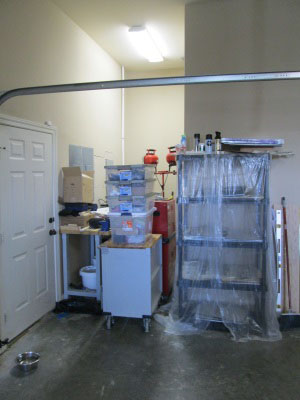 The shelves covered in plastic sheet to the right are where I place my freshly-rolled clay tiles to gradually dry without cracking. The low-down rolling cabinet in the foreground contains all of my handheld ceramic equipment (shapers and scrapers and rolling pins whatnot) along with general protective gear like face masks and safety goggles. Each of the plastic boxes on top of this cabinet is associated with a currently in-progress project. Behind this cabinet is a red rolling tool cabinet, which contains any smaller power tools, clamps, screwdrivers, wrenches and spanners, and also my soldering station and magnifying lens with helping hands and suchlike. To the right of that tool cabinet is a door (not visible in this picture) to a built-in closet, where I keep my larger power tools such as a diamond saw, desktop grinder, router, and so forth.

On the weekends, Max’s garage space opens up as his stepson drives out in his truck and Max’s wife leaves for her real estate agent’s job. “As soon as she has left, I leap into action,” Max says. “I roll out my tool boxes, set up a folding table and chair, and start work on whatever it is I’m currently working on.” 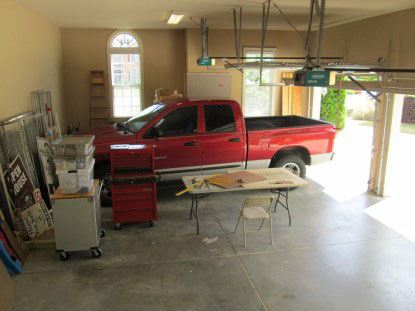 As he works on projects in his garage, Max says he is “happily listening to stuff like Led Zeppelin, Genesis, Pink Floyd, Yes, Supertramp, Gentle Giant, The Moody Blues…”

The image below shows a close-up of the current state-of-play with regard to my BADASS Display. A week ago, I routed out the areas in the big plywood panel that will accommodate the hardboard display and control panels. In this image, I’m poised to mark out the hardboard panels and start drilling the mounting holes along with the 256 holes for the tri-state LEDs. 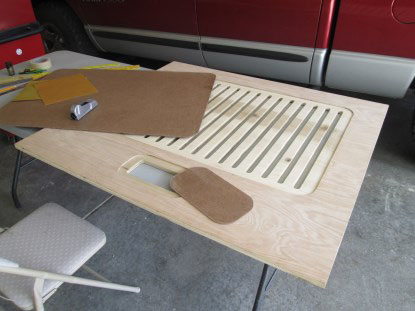 What can I say? Working on my hobby projects is a great way to wind down after a hard day at work, and being in any of my three personal workspaces makes me happy. 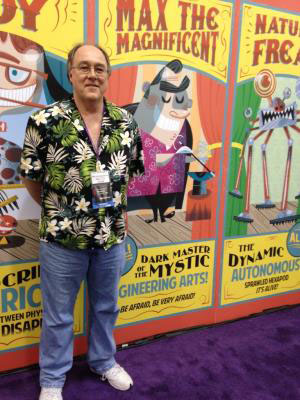 Max poised to give a presentation at the EELive! Conference in San Jose, CA, earlier this year

Editor’s Note: To find out more about Clive “Max” Maxfield, read his 2013 interview in Circuit Cellar. You can follow Max on Twitter @MaxMaxfield.