Calling it a low-tech solution to a high-tech challenge, MIT researchers have received a lot of attention recently for their modular system of self-assembling robot cubes. The video of the so-called M-Blocks in action, which MIT posted earlier this month on YouTube, has also become high profile. A recent tally has the video at nearly 1.5 million views and counting.

The text accompanying the video explains how the cubes are able to move around and climb over each other,  jump into the air, and roll across surfaces as they connect in a variety of configurations. And they do all this without any external moving parts. Instead, each M-Block contains a flywheel that can reach speeds of 20,000 rpm. When the flywheel brakes, it imparts angular momentum to the cube.  Precisely placed magnets on every face and edge of each M-Block enable any two cubes to attach to each other.

The simple design holds short- and long-term promise.  According  to an October 4 article by Larry Hardesty of the MIT News Office, it is hoped that the blocks can be miniaturized someday, perhaps to swarming microbots that can self-assemble with a purpose. Even at their current size, further development of the M-Blocks might lead to “armies of mobile cubes” that can help repair bridges and buildings in emergencies, raise scaffolding, reconfigure into heavy equipment or furniture as needed, or head in to environments hostile to humans to diagnose and repair problems, the article suggests.

While it may not rise to “cooperative group behavior,”  the ability of one cube to drag another and influence its alignment is impressive. What could 100 or more of these robots accomplish as MIT researchers continue to develop algorithms to control them? 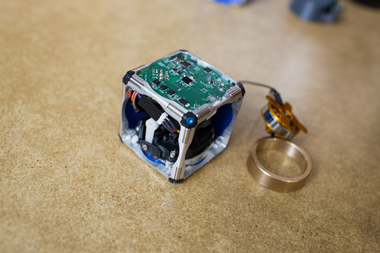 A prototype of the new modular robot, with its interior and flywheel exposed.
(Photo: M. Scott Brauer)