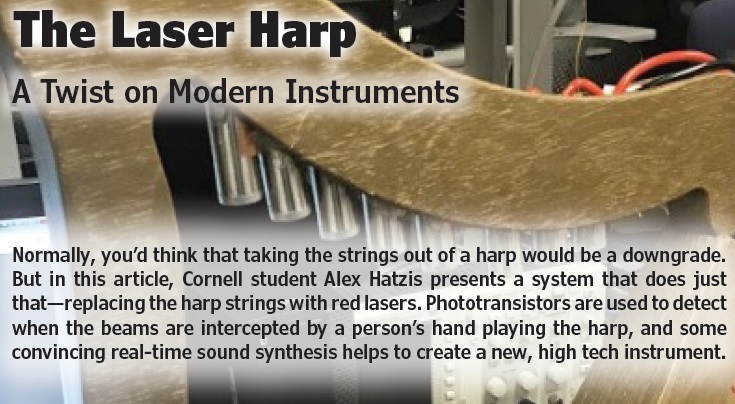 A Twist on Modern Instruments

Normally, you’d think that taking the strings out of a harp would be a downgrade. But in this article, Cornell student Alex Hatzis presents a system that does just that—replacing the harp strings with red lasers. Phototransistors are used to detect when the beams are intercepted by a person’s hand playing the harp, and some convincing real-time sound synthesis helps to create a new, high tech instrument.

My lab partner, Glenna Zhang, and I had the opportunity to work together on a few final projects during our time studying electrical and computer engineering at Cornell University. Even though those projects varied wildly in both design and complexity, we always tried to tie-in one thematic constant, something for which we both share a passion: music. The application of technology has already given way to a number of new ways to produce music. The unique sound of the electric guitar would not be possible without its amplifier, and computer synthesizers can replicate most instruments with remarkable accuracy, or can be used to produce entirely new sounds. Despite these advancements, we both feel that there is plenty of untapped potential for technology to change how we produce music. Our final project for the course “ECE 4760: Designing with Microcontrollers,” is now dubbed the “Laser Harp,” and it is one such attempt to tap into that potential [1].

Anyone equally interested in the world of technology and music will probably realize that our project is not the first device to be called a “laser harp.” While researching the idea, we found that laser harps already take on several different forms. The most common is a single unit placed on the ground that beams several coplanar, outward-fanning lasers toward the sky.

Our idea took closer inspiration from a display at a local museum, the Ithaca Sciencenter, which featured a traditional harp frame without any strings [2]. However, if you ran your hand through the middle, sounds would play as if the strings were still present. Our project was our own take on this example. At the highest level, our harp can be broken into a few different subcomponents: the laser emitter and receiver subsystem, the string control/sound synthesis subsystem and the physical harp frame. 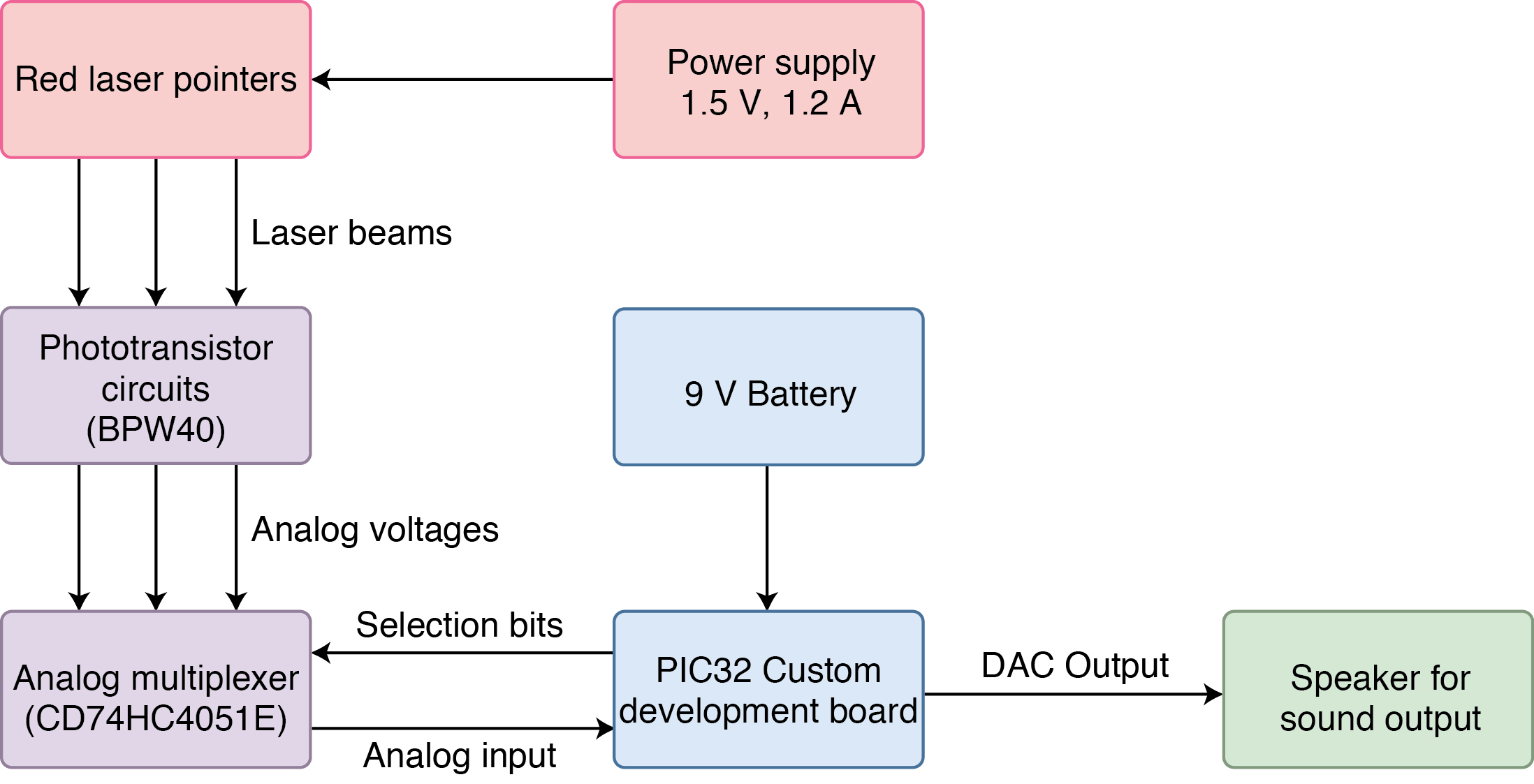 Our laser harp is extremely intuitive to use. A block diagram of the harp subsystems is shown in Figure 1. When powered on, the eight laser pointers built into the top of the frame illuminate. They emit visible red light, but the beams themselves are not visible without the use of a fog machine or something similar. The harp is small enough to rest comfortably 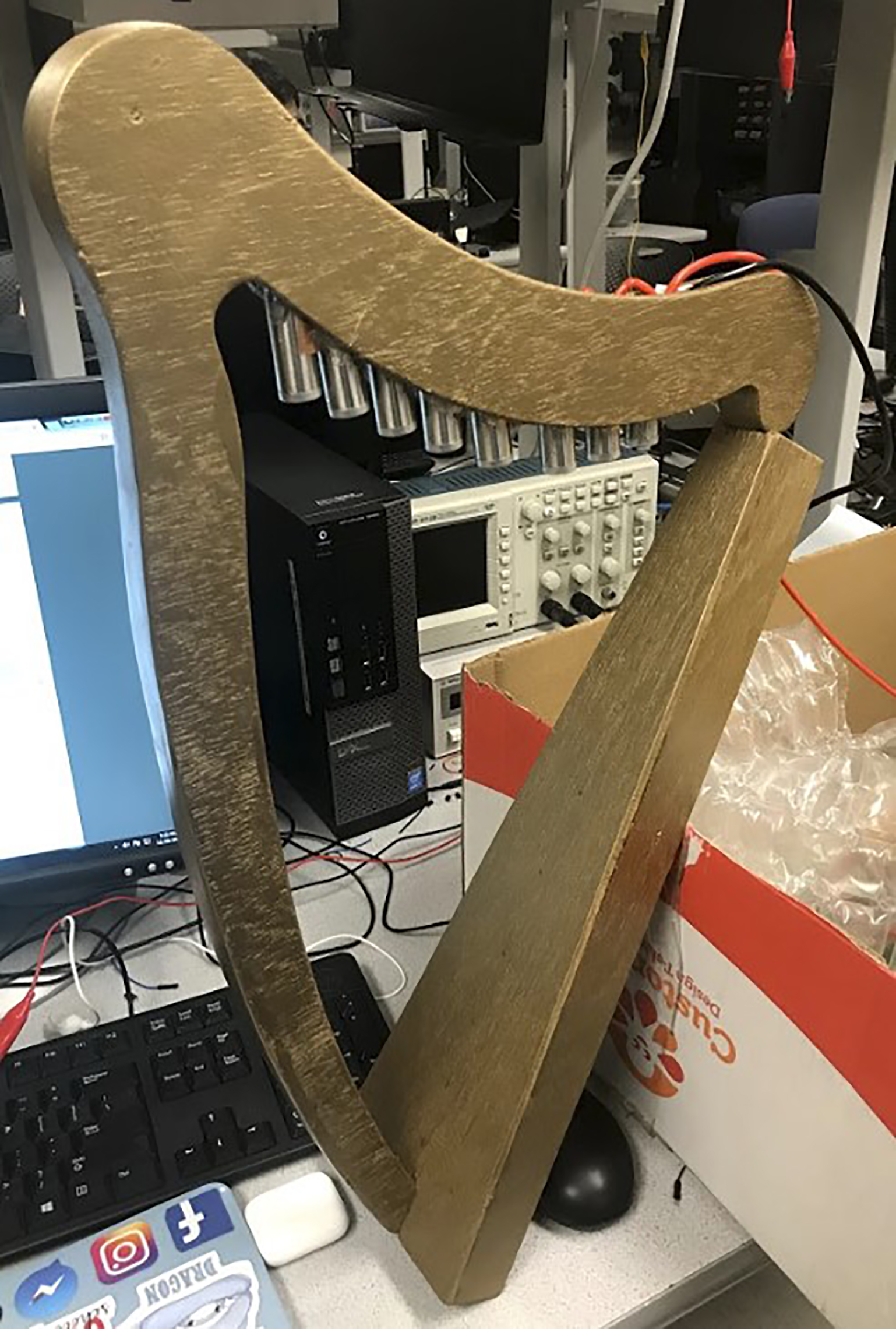 in one’s lap (Figure 2). This is how we designed it to be played—instead of resting on the floor like a typical full-size harp. Each of the lasers is carefully aligned to point at its own dedicated phototransistor circuit, which allows us to tell whether or not the corresponding laser pointer is currently shining on it. These lasers represent the strings of the harp.

In the current implementation, each of the eight “strings” corresponds to one of the notes in a C major scale. By running your hand through the harp, the laser beams are intercepted, and the phototransistor circuits register this. The control system interprets which strings are being plucked, and produces the correct waveform to be played through a speaker connected externally to the harp using a standard 3.5 mm aux cable. The sounds produced have been designed to closely replicate plucked strings, and the result is quite pleasing to hear. …