On August 6, 2012, NASA’s Curiosity rover successfully landed in Gale Crater on Mars after traveling a daunting 352 million miles. It was a triumphant moment for the scores of Curiosity team members who had spent years engineering the mission. And it has become the archetypal example of the benefit of team-based, multidisciplinary engineering. 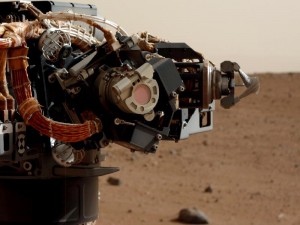 This is an image of the Mars Hand Lens Imager (MAHLI) located on Curiosity’s arm. (Source: NASA/JPL-Caltech/MSSS)

In Circuit Cellar 267 (October  2012), Steve Ciarcia refers to the Curiosity effort as a point of departure for expounding the importance teamwork and intelligent project management.  He argues that engineering endeavors of all sorts and sizes require the extraordinary focus and collaboration of multiple specialists all working toward a common goal.

Several weeks ago, I was following the successful landing of the Curiosity rover on Mars, which got me reminiscing about the importance of teamwork on large engineering projects. Obviously, a large project requires a significant number of people due to the sheer amount of work. But, more importantly, a project’s various tasks require a balanced mix of skills for successful and timely completion.

Naturally, you want engineers working in areas where they have the skills and confidence to succeed. That’s when they’ll do their best work. At a basic level, all engineers share a distinctive trait: the ability to make something you want from technology and materials. This is the best definition of “engineer” I have heard. But, as I said last month, different engineers have different interests, skills, and experience. Some engineers are good at understanding the subtleties of how a large systems’ components interact, while others are good at low-level details (e.g., analog circuit design, mechanical design, or software programming). Diversity of skills among team members is important and can greatly strengthen a team.

At some point, we all look to ascend the corporate ladder and, for most companies, that involves engineers taking on management responsibilities. Actively encouraging engineers to work in areas outside their comfort zones encourages greater diversity in problem-solving approaches. Further, inspiring engineers to seek responsibility and expand their comfort zones can make them better engineers for the long term. While this is mainly true about engineers who are employees, it also applies to any contractor or consultant involved in a long-term company relationship.

Some engineers can jump into just about any area and do well. However, it is rarely in the interest of the project or good team dynamics to follow that impulse. Those engineers need to enable the specialists to do the work they’re best at and only jump into situations where they can do the most good. In other words, when team management is your primary task, engineer or not, you need to take on a mentoring role, often teaching rather than doing.

Communication among team members is also key. There must be enough of it, but not too much. I have seen teams schedule so many meetings there isn’t any time left for individuals to make progress on their assigned tasks. Meetings need to be short, to the point, and involve only those people who have a vested interest in the information being exchanged. This can range from two engineers conversing in a hallway to a large project-wide meeting that keeps everyone in sync on a project’s overall goals and status. But beware, it can be difficult to keep big meetings from getting diverted into the minutiae of a particular problem. This needs to be avoided at all costs.

Even when the schedule is tight, overstaffing usually has a negative benefit. The math suggests that project completion time should go down by the inverse of the number of team members. However, this ignores the overhead of more communication among team members, which goes up by the square of the number of participants. If there are too many team members, they may start getting in each other’s way and have less sense of ownership in what they’re doing. Basically, there are some tasks that take a fixed amount of time. As the saying goes, nine women can’t make a baby in one month!

Motivating the team is another key factor that should be a priority shared by the team and technical management. No matter how large or small a team member’s assigned tasks, if he feels he has the responsibility and the recognition for getting that task done, he’ll be more engaged and motivated to do well. Moving team members from task to task destroys any sense of ownership. Granted, every project has the occasional fire that needs to be extinguished—all hands on deck—but, if a project is constantly in that state, then it’s pretty much doomed to fail.

Regardless of whether you are engineering a Mars rover at NASA or creating the next great social media “widget” at a venture-capital funded start-up, the dynamics of successful project management have an established methodology. Design engineers are creative and it is important to give them the flexibility to unleash their creativity—but keep it within bounds. Most projects are time and cost sensitive. Ratifying your step up the corporate ladder only comes by ensuring the project is completed within budget and in a timely fashion.