To inspire children to get involved in science you need low-cost, open-source, learning-by-doing projects with a high cool factor. A Lego-based Michelson Interferometer developed by the University of Osnabrück is all that. Professor Mirco Imlau presented their project at the open hardware fest EHSM. 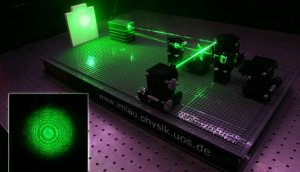 The second edition of the Exceptionally Hard and Software Meeting (EHSM) took place in Hamburg June 27-29. True to its tagline “pushing the frontiers of open source & DIY,” the meeting drew a crowd of people doing remarkable things in the field of open science and open soft and hardware. Subjects ranged from learning how to make synthetic diamonds which are used in experiments for quantum computing, the presentation of the first mostly open source hardware camera and an introduction to a DIY device to produce printed circuit boards.

One of the speakers was Mirco Imlau who heads the Ultrafast Physics Research Group at University of Osnabrück. Imlau explained he is looking for ways to playfully teach kids about photonics so that by the time they’ll join his classes they already have internalized knowledge about the field.

Imlau and his collegues did some serious research about what a project needs to appeal to kids and came up with a set of basic rules. Children aren’t the most affluent of citizens so the project needs to be low-cost. The required components for photonic experimenting also need to be easily available. That’s why the team turned to Lego. A third important factor is appeal and lastly the project needs to based on the principles of open hardware. That means a rich environment of instruction manuals and video’s, platforms to exchange ideas and the possibility to look under the hood. All that is available at the MyPhotonics website.

Combining all these principles the team developed a project for kids to build a historic optical experimentation device: the Michelson Interferometer. A tool to measure the qualities of optical beams. Imlau pointed out that another important aspect between failure and success is that the project once constructed should function properly. So for instance, the Lego mirror mount has the same functionalities as its professional counterpart, like 2-axis adjustment and reflection suppression. The result is a fully functional Lego-based Michelson Interferometer with a price tag of approximately $194 (€142) against approximately $3900 (€2,870) should professional components be used.—Tessel Renzenbrink