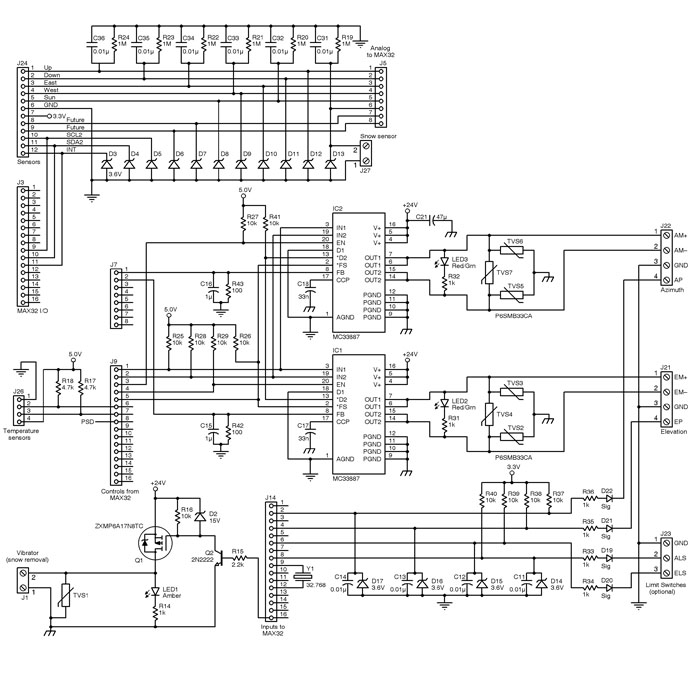 Figure 1: These are the H-bridge motor drivers and sensor input conditioning circuits. Most of the discrete components are required for transient voltage protection from nearby lightning strikes and inductive kickback from the motors.

Graig Pearen, semi-retired and living in Prince George, BC, Canada, spent his career in the telecommunications industry where he provided equipment maintenance and engineering services. Pearen, who now works part time as a solar energy technician, designed the SunSeeker Solar Array tracker, which won third place in the 2012 DesignSpark chipKit challenge.

He writes about his design, as well as changes he has made in prototypes since his first entry, in Circuit Cellar’s October issue. It is the first part of a two-part series on the SunSeeker, which presents the system’s software and commissioning tests in the final installment.

In the opening of Part 1, Pearen describes his objectives for the solar array tracker:

When I was designing my solar photovoltaic (PV) system, I wanted my array to track the sun in both axes. After looking at the available commercial equipment specifications and designs published online, I decided to design my own array tracker, the SunSeeker (see Photo 1 and Figure 1).

I had wanted to work with a Microchip Technology PIC processor for a while, so this was my opportunity to have some fun. I based my first prototype on a PIC16F870 microcontroller but when the microcontroller maxed out, I switched to its big brother, the PIC16F877. Although both prototypes worked well, I wanted to add more features and 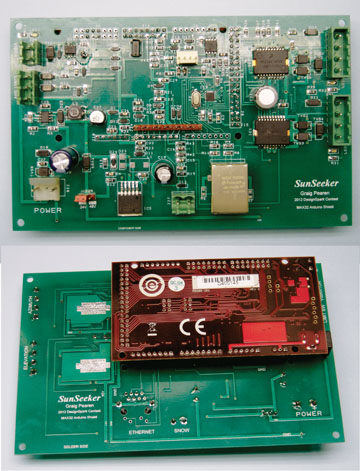 The SunSeeker board, at top, contains all the circuits required to control the solar array’s motion. This board plugs into the Microchip Technology chipKIT MAX32 processor board. The bottom side of the SunSeeker board (green) with the MAX32 board (red) plugged into it is shown at bottom.

capabilities. I particularly wanted to add Ethernet access so I could use my home network to communicate with all my systems. I was considering Microchip’s chipKIT Max32 board for the next prototype when Circuit Cellar’s DesignSpark chipKIT contest was announced.

I knew the contest would be challenging. In addition to learning about a new processor and prototyping hardware, the contest rules required me to learn a new IDE (MPIDE), programming language (C++), schematic capture, and PCB design software (DesignSpark PCB). I also decided to make this my first surface-mount component design.

My objective for the contest was to replicate the functionality of the previous Assembly language software. I wanted the new design to be a test platform to develop new features and tracking algorithms. Over the next two to three years of development and field testing, I plan for it to evolve into a full-featured “bells-and-whistles” solar array tracker. I added a few enhancements as the software evolved, but I will develop most of the additional features later.

The system tracks, monitors, and adjusts solar photovoltaic (PV) arrays based on weather and atmospheric conditions. It compiles statistics on these conditions and communicates with a local server that enables software algorithm refinement. The SunSeeker logs a broad variety of data.

The SunSeeker measures, displays, and records the duration of the daily sunny, hazy, and cloudy periods; the array temperature; the ambient temperature; daily minimum and maximum temperatures; incident light intensity; and the drive motor current. The data log is indexed by the day number (1–366). Index–0 is the annual data and 1–366 store the data for each day of the year. Each record is 18 bytes long for a total of 6,588 bytes per year.

At midnight each day, the daily statistics are recorded and added to the cumulative totals. The data logs can be downloaded in comma-separated values (CSV) format for permanent record keeping and for use in spreadsheet or database programs.

The SunSeeker has two main parts, a control module and a separate light sensor module, plus the temperature and snow sensors.

The control module is mounted behind the array where it is protected from the heat of direct sunlight exposure. The sensor module is potted in clear UV-proof epoxy and mounted a few centimeters away on the edge of, and in the same plane as, the array. To select an appropriate potting compound, I contacted Epoxies, Etc. and asked for a recommendation. Following the company’s advice, I obtained a small quantity of urethane resin (20-2621RCL) and urethane catalyst (20-2621CCL).

When controlling mechanical devices, monitoring for proper operation, and detecting malfunctions it is necessary to prevent hardware damage. For example, if the solar array were to become frozen in place during an ice storm, it would need to be sensed and acted upon. Diagnostic software watches the motors to detect any hardware fault that may occur. Fault detection is accomplished in several ways. The H-bridges have internal fault detection for over temperature, under voltage, and shorted circuit. The current drawn by the motors is monitored for abnormally high or low current and the motor drive assemblies’ pulses are counted to show movement and position.

To read more about the DIY SunSeeker solar array tracker, and Pearen’s plans for further refinements, check out the October issue.