Dialog Semicondcutor’s new offering is the first SoC on the market with dedicated hardware acceleration for HomeKit security operations which ensures end-to-end application encryption, safeguarding personal information in transit. With the recent introduction of iOS 10, Apple HomeKit is now an integral part of iOS, including its dedicated app that creates an enhanced user experience. The Apple Home app is compatible not just with iPhone, but is also optimized for iPad and the Apple Watch running watchOS 3. With the app, an Apple TV or iPad can easily act as a smart home hub, enabling home control from anywhere. 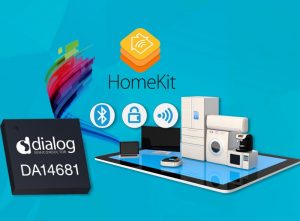 Its integrated topology streamlines development, minimizes BOM cost and enables the kit to consume less than five µA on standby. The development kit maximizes application space and flexibility, using a mere 170 KB of flash memory and provides 64 KB of RAM for apps to utilize, even allowing user defined profiles to further customize applications on top of pre-configured HomeKit profiles.

To give developers all of the tools they need to create next-generation IoT applications, the DA14681 development kit consists of the HomeKit SDK, Basic and Pro versions of the kit, and a flexible add-on board to interface with the separately available MFi chip. The new HomeKit development kit and add-on board are now available from Avnet, Digi-Key and Mouser.