Want to give your MP3 player vintage tube sound? You can with the proper circuits, an antique radio, and a little know-how. In addition to generating amazing sound, the design will be an eye catcher in your home or office.

Here I present excerpts from Bill Reeve’s article, “Repurposing Antique Radios as Tube Amplifiers,” in which he provides vintage radio resources, simple circuit diagrams, and essential part info. He also covers the topics of external audio mixing and audio switching. The article appeared in the May 2012 edition of audioXpress magazine.

Manufactured from the 1930s through the 1960s, vacuum tube radios often contain high-quality audio amplifiers at the end of their RF signal chain. You can repurpose these radios into vintage, low-power tube amplifiers—without marring them in any way or detracting from their original charm and functionality as working analog radios.

Wood-cased radios have especially good sound quality, and the battery compartments in antique “portable” radios (like the Philco 48-360 or the Zenith Transoceanics) provide perfect locations for additional circuitry. When restored properly, large furniture-style radios that were built for “high fidelity” (like the late 1930s and early 1940s Philco console radios) can fill a room with rich beautiful sound.

The simple circuits described in this article perform two functions. They mix an external line-level stereo signal (typically from an MP3 player or computer) and reference it to the radio’s circuit. They also use the radio’s on/off knob to switch this external signal to the radio’s audio amplifier.

There is not one circuit that will work for every antique radio. (Original schematics for antique tube radios are available on the web www.justradios.com). But the circuits described here can be adapted to any radio topology. All the parts can be ordered from an electronics supplier like Digi-Key, and the circuit can be soldered on a prototyping printed circuit board (such as RadioShack P/N 276-168B).

Figure 1 and Figure 2 show some examples of circuit schematics that mix the line-level stereo audio signals together (almost all tube radios are monophonic), while providing galvanic isolation from high voltages within the radio. Figure 1 shows an inexpensive solution suitable for most table-top radios.

Figure 1: An inexpensive circuit for mixing an MP3 player’s stereo audio signals safely into an antique radio. None of the component values are critical. (Source: B. Reeve, AX 5/12)

These radios have relatively small speakers that are unable to reproduce deep bass, so an inexpensive audio transformer (available from on-line distributors) does the job. I picked up a bucket of Tamura TY-300PR transformers for $0.50 each at an electronics surplus store, and similar transformers are commercially available. Alternatively, the Hammond 560G shown in Figure 2 is an expensive, highquality audio transformer suitable to high-fidelity radios (like the furniture-sized Philco consoles). A less expensive (and fine-sounding) alternative is the Hammond 148A. 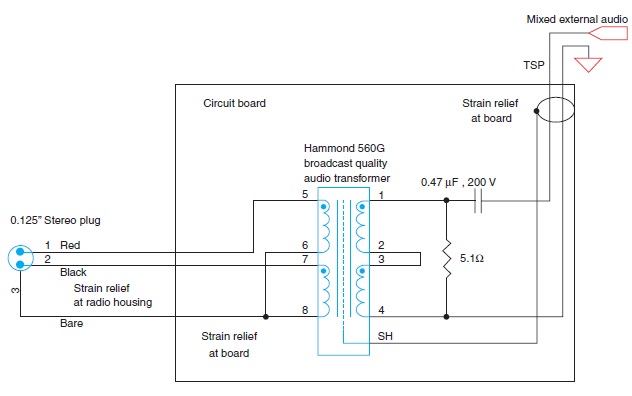 I use Belden 9154 twisted, shielded audio cable for wiring internal to the radio, but twisted, 24-gauge wire will work well. An 8′ long audio cable with a 3.5-mm stereo jack on each end can be cut in half to make input cables for two radios, or you can use the cord from trashed ear-buds. You can route the audio cable out the back of the chassis. Photo 1 is a photograph of a 1948 Philco portable tube radio restored and used as an MP3 player amplifier. 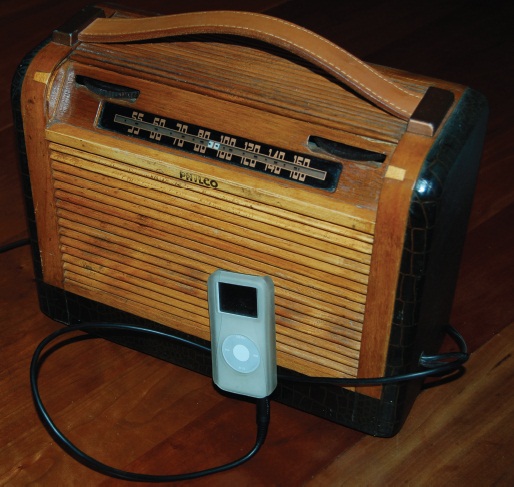 After creating the mixed, radio-referenced signal, the next step is to build a circuit that switches the voltage driving the radio’s audio amplifier between its own internal broadcast and the external audio signal.

Figure 3 illustrates this audio routing control using the radio’s existing front panel power knob. Turn the radio on, and it behaves like the old analog radio it was designed to be (after the tubes warm up). However, if you turn the radio off, then on again within a few of seconds, the external audio signal is routed to the radio’s tube amplifier and speaker.

The circuit shown in Figure 3 uses a transformer to create the low voltage used by the switching circuit. There are many alternative power transformers available, and many methods of creating a transformerless power supply. Use your favorite….

The next photos (see Photo 2a and Photo 2b) show our additional circuit mounted in the lower (battery) compartment of a Zenith Transoceanic AM/shortwave receiver. Note the new high-voltage (B+) capacitors (part of the radio’s restoration) attached to a transformer housing with blue tie wraps.

The added circuit board that performs the audio re-routing is mounting to a 0.125″ maple plywood base, using screws countersunk from underneath. The plywood is securely screwed to the inside base of the radio housing. Rubber grommets are added wherever cables pass through the radio’s steel frame.—Bill Reeve

Simple Circuits: Turn a Tube Radio Into an MP3 Amp