Semtech has announced its collaboration with National Narrowband Network Communications (NNNCo) to build a nationwide rural IoT network to bring high-tech agriculture solutions to Australian farmers. The LoRaWAN open standard developed by the LoRa Alliance is expected to help transform Australia’s farms, giving farmers real-time data on soil moisture, rainfall, crops, water levels, and livestock through a network of in situ low-cost wireless sensors. One of the key comptabilities of a LoRaWAN is that it enables users to communicate bi-directionally with sensors on an individual or group level. 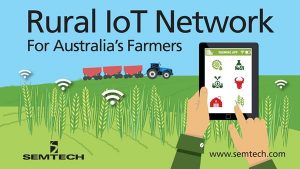 The sensors use limited power and can operate ‘in the field’ for years without the need for intervention. The farmer will be able to make intelligent, sound decisions to drive multiple functions, including irrigation, livestock feed stations, water pumps, and emergency signals. The LoRaWAN network will immediately cover one million acres of farmland across rural New South Wales (NSW) which will encompass dry land crops, horticulture and livestock and a number of rural towns. Within 18 months, the plan is to extend broadly across Australia.