This article was a preview of an upcoming interview in the February issue of Circuit Cellar. The full interview is now available here. 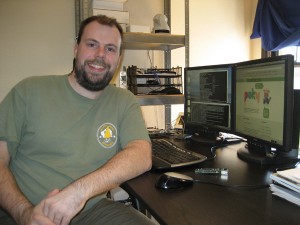 Scott Garman is a Portland, OR-based Linux software engineer. Scott is very involved with the Yocto Project, an open-source collaboration that provides tools for the embedded Linux industry. Scott tells us about how he recently helped Intel launch MinnowBoard, the company’s first open-hardware SBC. The entire interview will be published in Circuit Cellar’s February issue.—Nan Price, Associate Editor

NAN: What is the Yocto Project?

SCOTT: The Yocto Project is centered on the OpenEmbedded build system, which offers a tremendous amount of flexibility in how you can create embedded Linux distros. It gives you the ability to customize nearly every policy of your embedded Linux system. 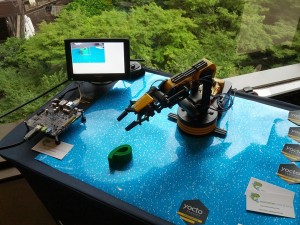 Scott was involved with a MinnowBoard robotics and computer vision demo at LinuxCon Japan, May 2013.

NAN: Tell us about Intel’s recently introduced the MinnowBoard SBC. 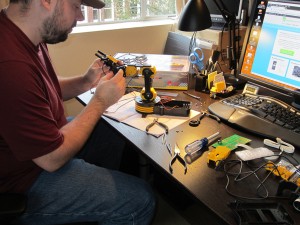 Scott worked on a MinnowBoard demo built around an OWI Robotic Arm.

The MinnowBoard also has embedded bus standards including GPIO, I2C, SPI, and even CAN (used in automotive applications) support. We have an expansion connector on the board where we route these buses, as well as two lanes of PCI Express for custom high-speed I/O expansion.

SCOTT: The main motivation for the MinnowBoard was to create an affordable Atom-based development platform for the Yocto Project. We also felt it was a great opportunity to try to release the board’s design as open hardware.