Building a robot is a rite of passage for electronics engineers. And thus this magazine has published dozens of robotics-related articles over the years.

In the March issue, we present a particularly informative article on the topic of robot navigation in particular. Larry Foltzer tackles the topic of robot positioning with acoustic delay triangulation. It’s more of a theoretical piece than a project article. But we’re confident you’ll find it intriguing and useful.

Here’s an excerpt from Foltzer’s article:

“I decided to explore what it takes, algorithmically speaking, to make a robot that is capable of discovering its position on a playing field and figuring out how to maneuver to another position within the defined field of play. Later on I will build a minimalist-like platform to test algorithms performance.

In the interest of hardware simplicity, my goal is to use as few sensors as possible. I will use ultrasonic sensors to determine range to ultrasonic beacons located at the corners of the playing field and wheel-rotation sensors to measure distance traversed, if wheel-rotation rate times time proves to be unreliable.

To this date, the four goals listed—in terms of algorithm development and code—are complete and are the main subjects of this article. Going forward, focus must now shift to the hardware side, including software integration to test beyond pure simulation.

SENSOR TECHNOLOGY & THE PLAYING FIELD
A brief survey of ultrasonic ranging sensors indicates that most commercially available units have a range capability of 20’ or less. This is for a sensor type that detects the echo of its own emission. However, in this case, the robot’s sensor will not have to detect its own echoes, but will instead receive the response to its query from an addressable beacon that acts like an active mirror. For navigation purposes, these mirrors are located at three of the four corners of the playing field. By using active mirrors or beacons, received signal strength will be significantly greater than in the usual echo ranging situation. Further, the use of the active mirror approach to ranging should enable expansion of the effective width of the sensor’s beam to increase the sensor’s effective field of view, reducing cost and complexity.

Taking the former into account, I decided the size of the playing field will be 16’ on a side and subdivided into 3” squares forming an (S × S) = (64 × 64) = (26, 26) unit grid. I selected this size to simplify the binary arithmetic used in the calculations. For the purpose of illustration here, the target is considered to be at the center of the playing field, but it could very well be anywhere within the defined boundaries of the playing field. 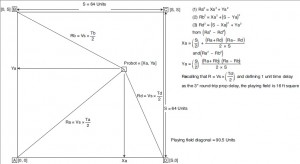 The issue in which this article appears will available here in the coming days.