Roboticists and soccer fans from around the world converged on Eindhoven, The Netherlands, from April 25–29 for the Roboup Dutch Open. The event was an interesting combination of sports and electronics engineering. 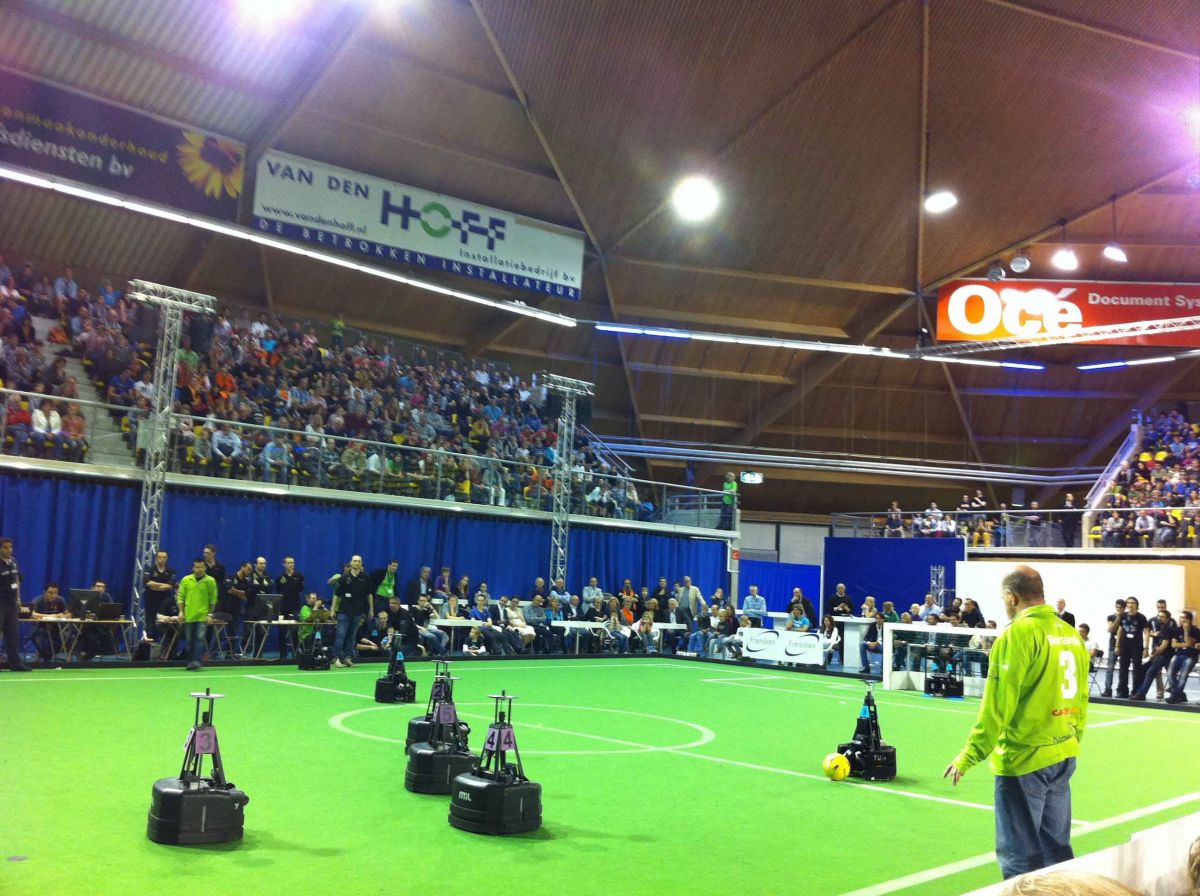 Tessel Rensenbrink was available and willing to cover the event. She reports:

Attending the Robocup Dutch Open is like taking a peek into the future. Teams of fully autonomous robots compete with each other in a soccer game. The matches are as engaging as watching humans compete in sports and the teams even display particular characteristics. The German bots suck at penalties and the Iranian bots are a rough bunch frequently body checking their opponents.

The Dutch Open was held in Eindhoven, The Netherlands from the 25th to the 29th of April. It is part of Robocup, a worldwide educational initiative aiming to promote robotics and artificial intelligence research. The soccer tournaments serve as a test bed for developments in robotics and help raise the interest of the general public. All new discoveries and techniques are shared across the teams to support rapid development.
The ultimate goal is to have a fully autonomous humanoid robot soccer team defeat the winner of the World Cup of Human Soccer in 2050.

In Eindhoven the competition was between teams from the Middle Size Robot League. The bots are 80 cm (2.6 ft) high, 50 cm (1.6 ft) in diameter and move around on wheels. They have an arm with little wheels to control the ball and a kicker to shoot. Because the hardware is mostly standardized the development teams have to make the difference with the software.

Once the game starts the developers aren’t allowed to aid or moderate the robots. Therefore the bots are equipped with all the hardware they need to play soccer autonomously. They’re mounted with a camera and a laser scanner to locate the ball and determine the distance. A Wi-Fi network allows the team members to communicate with each other and determine the strategy.

The game is played on a field similar to a scaled human soccer field. Playing time is limited to two halves of 15 minutes each. The teams consist of five players. If a robot does not function properly it may be taken of the field for a reset while the game continues. There is a human referee who’s decisions are communicated to the bots over the Wi-Fi network.

The Dutch Open finals were between home team TechUnited and MRL from Iran. The Dutch bots scored their first goal within minutes of the start of the game to the excitement of the predominantly orange-clad audience. Shortly thereafter a TechUnited bot went renegade and had to be taken out of the field for a reset. But even with a bot less the Dutchies scored again. When the team increased their lead to 3 – 0 the match seemed all but won. But in the second half MRL came back strong and had everyone on the edge of their seats by scoring two goals.

When the referee signaled the end of the game, the score was 3-2 for TechUnited. By winning the tournament the Dutch have established themselves as a favorite for the World Cup held in Mexico in June. Maybe, just maybe, the Dutch will finally bring home a Soccer World Cup trophy.