Renesas Electronics Europe and SEGGER recently announced their collaboration to facilitate the expansion of Renesas’s RX Family of 32-bit microcontroller ecosystem through the adoption of SEGGER’s newly-released SystemView software. SystemView supports streaming over J-Link, as well as real-time analysis and visualization, in relation to any Renesas RX-based embedded design. 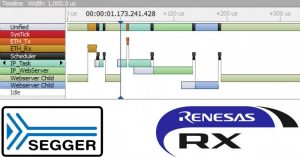 SystemView gives you insight into the behavior of a program. It offers cycle accurate tracing of interrupts and task start/stop in addition to task activation and API calls when an RTOS is used. It visualizes and analyzes CPU load by task, interrupts, and software timers. Using SEGGER’s J-Link debug probe with SystemView enables real-time analysis, which gives you an in-depth understanding of the application’s run-time behavior.

SystemView uses SEGGER’s Real-Time Transfer (RTT) technology to ensure real-time delivery of data and minimal intrusiveness on the system. RTT enables up to 2 MB per second data transfer for continuous acquisition of real-time data, requiring no hardware other than a J-Link and the standard debug interface. SystemView records the data retrieved from the target and visualizes the results in different ways. You can save data recordings for later documentation and analysis.