William Wachsmann, a retired electronic technologist from Canada, has more than 35 years of experience working with minicomputers, microcomputers, embedded systems, and programming in industries ranging from nuclear and aerospace to voicemail and transportation systems.

But despite the complexity of the work he has done over the years, when it came to building a remote-controlled, powered trapdoor lift system for his home, he had two priorities: simplicity and price.

“Although it can be fulfilling to design your own hardware, why reinvent the wheel if you don’t have to? Many reasonably priced modules can be wired together,” Wachsmann says in his article about the project, which appears in Circuit Cellar’s May issue. “Add some software to express the functionality required and you can quickly and inexpensively put together a project. Not only is this method useful for a homebuilt one-of-a-kind application, but it can also be used for proof-of-concept prototyping. It leaves you free to concentrate on solving the problems pertinent to your application.”

Wachsmann’s project relies on off-the-shelf modules for the electrical functions of a trapdoor lift system that provides access to his basement.

“Lifting the trapdoor was hard on my wife’s back,” he says. “If her arms were full when she came upstairs and the door was open, she had to twist her body to release the mechanical latching mechanism while simultaneously stopping the door from falling on her head.”

The multidisciplinary project includes mechanical, electronic, and software components. For the full details—including programming of the project’s Freescale Semiconductor FRDM-KL25Z microprocessor using the mbed online IDE—check out the May issue now available for membership download and single-issue purchase.

Excerpts from Wachsmann’s article below describe his system’s mechanical and hardware elements.

I used a screw lift from an old treadmill. It has a 48-VDC motor that draws about 1 A under a 100-lb load. The screw mechanism has a 6” travel distance. Built-in limit switches shut off the motor when the screw reaches the end of its travel in each direction. The screw’s length is nominally 30” when closed and 36” when open. The length can be adjusted slightly by rotating the screw by hand, but the overall travel distance is still 6”.

A simple switch would have sufficed to control the screw lift’s DC motor, but I wanted it to be remotely controlled so the trapdoor could be raised and lowered from anywhere upstairs and from the basement. When someone is in the basement with the trapdoor closed there is no visible way for them to know if the door is obstructed. Initially, I was going to install a warning beeper that the door was opening, but that wouldn’t help if an inanimate object (e.g., a bag of groceries) was on top of the door. I needed to incorporate some form of sensing mechanism into the design. 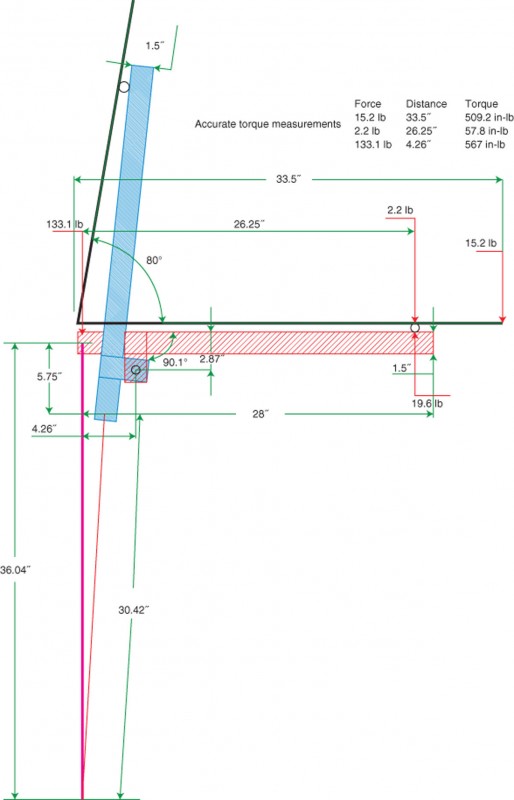 THE MECHANICS
I needed a levered system design that used a pivoted bar and the motorized screw lift. The lift also had to enable the door to be manually opened in case of a power failure.
I used IMSI/Design’s TurboCAD program for the mechanical design. By using CAD software, I could experiment with the pivot position, moment arms, and torque requirements to meet the mechanical constraints imposed by the screw lift and the trapdoor’s size and weight. 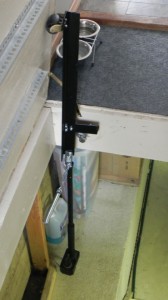 Photo 1: The screw lift and pivot arm mechanism with a spring assist are shown.

To keep within the 6” lift constraint, I used a 4.25” moment arm to pull down on the pivot arm. This left me with the force required to initially lift the door at 119.5 lb. Also this did not include the added torque due to the pivot arm’s weight.

After mulling this over for a couple of days (and nights) I had an idea. I realized that 119.5 lb is only needed when the door is completely closed. As the door opens, the torque requirement lessens. I incorporated a heavy spring (see Photo 1). When the door is closed the spring extension provides an additional downward force of about 35 lb. This is enough to lessen the load on the screw lift and to compensate for the pivot arm’s additional 2.2 lb. Using a screw lift meant the arm would not spring up if the door was manually opened.

I used an angle iron for the pivot arm. It is 28” long because it had to push up on the door to the right of the door’s center of gravity at 16.75” without adding too much additional torque. The roller is the type used as feet on beds. I used an arbor and 0.75”-diameter bolt through the floor joist for the pivot (see Photo 2). 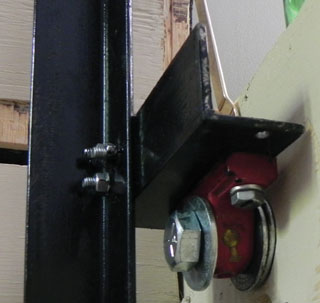 Photo 2: An arbor is used as a bearing with a 0.75” bolt through the floor joist. The lift mechanism pivots at this point.

THE HARDWARE
I had set an arbitrary $100 limit for the rest of the system and I quickly realized I would easily come in under budget. I used a $24.25 two-channel RF wireless garage door remote-control receiver, which I purchased from eBay (see Photo 3). This controller can be used in a latched or an unlatched mode. The latched mode requires a momentary push of one of the buttons to cause one of the relays to switch and stay in the On position. When the controller is in unlatched mode, you must hold the button down to keep the relay switched. 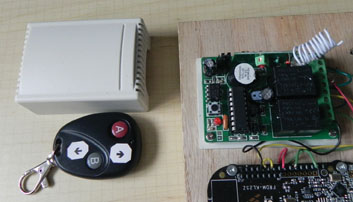 Photo 3: The two-channel wireless remote control is shown with the cover removed from the receiver. It came with two keychain-style remotes, which I marked with Up and Down arrows.

Unfortunately, this remote control and any similar ones only come with single-pole double-throw (SPDT) relays. What I really wanted were double-pole double-throw (DPDT) relays to switch both sides of the motor to enable current reversal through the motor.
A remote control system with two remotes seemed ideal and was possible to design with SPDT, so I purchased the relays. Figure 2 shows the circuit using two bridge rectifier DC power supplies. It turns out there were problems with this approach. 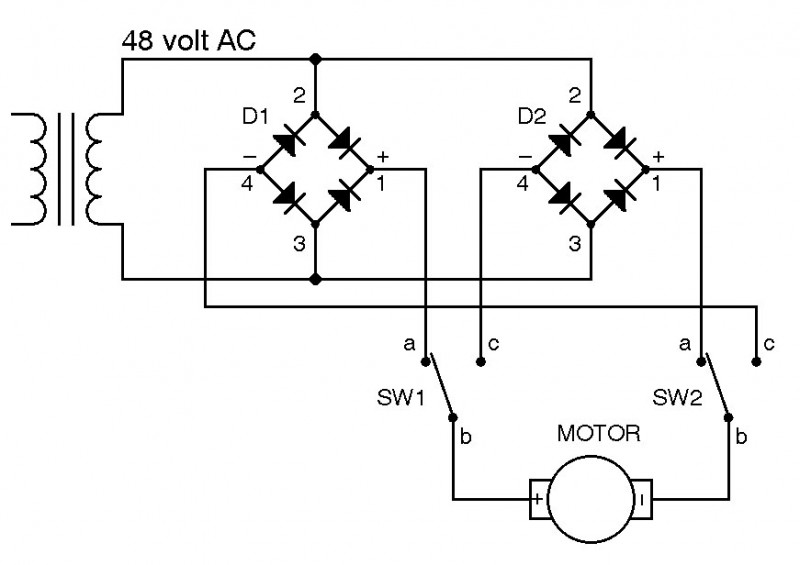 I decided to just use the door in unlatched mode and continuously hold down the A button until the door was fully open. What was the problem with this? Noise! Interference from the motor was getting back into the control and causing the relay to frequently switch on and off. This is not good for mechanical relays that have a finite contact life.

After playing around for a while with both operation modes, I noticed that even in the latched mode the motor would sometimes stop and it would occasionally even reverse itself. This was really bad and it became worse.

If both SW1 and SW2 happened to switch at the same time and if the current was at a maximum and there was arcing at the terminal, there could conceivably be a momentary short through a diode in each of the bridge rectifiers that would burn them out. Arc suppression devices wouldn’t help because when active at high voltages, they would almost look like a short between the switch’s terminals A,C. I needed to step back and rethink this.

I found an $8.84 two-channel DPDT relay switch board module on eBay. The module enabled me to use a single-power supply and isolated the motor current from the remote-control board. These relays boards have TTL inputs, so it is tricky to use relays on the remote control board to control the relays on the second relay board. You have to contend with contact bounce. Even if I incorporated debounce circuits, I still didn’t have a way stop the door from opening if it was obstructed.

It was time to get with the 21st century. I needed to use a microcontroller and handle all the debounce and logic functions in firmware.

I bought a $12.95 Freescale Semiconductor FRDM-KL25Z development board, which uses the Kinetis L series of microcontrollers. The FRDM-KL25Z is built on the ARM Cortex-M0+ core. This board comes with multiple I/O pins, most of which can be programmed as required. It also has two micro-USB ports, one of which is used for downloading your program onto the microcontroller and for debugging (see Figure 3). 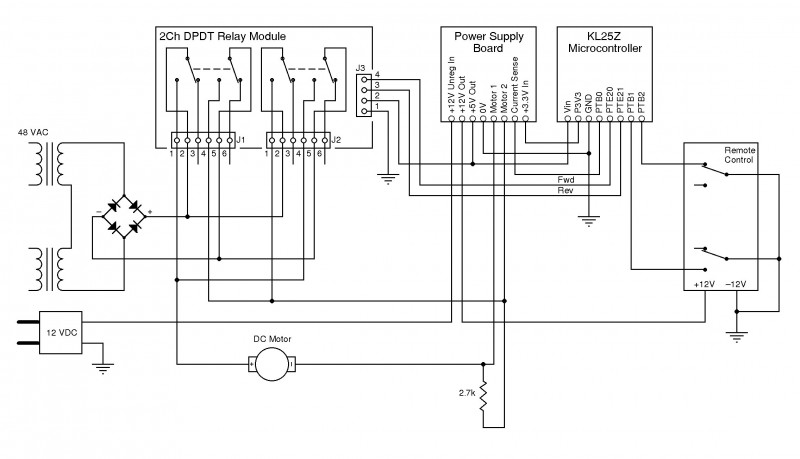 Figure 3: This is the system’s complete wiring diagram. On the left is a 48-V AC supply and an unregulated 12-V DC motor. A 2.7-Ω, 5-W resistor, which is used for current sensing, is in series with the motor.