Raul Alvarez, a freelance electronic engineer from Bolivia, has long been interested in wireless device-to-device communication.

“So when the idea of the Internet of Things (IoT) came around, it was like rediscovering the Internet,” he says.

I’m guessing that his dual fascinations with wireless and the IoT inspired his Home Energy Gateway project, which won second place in the 2012 DesignSpark chipKIT challenge administered by Circuit Cellar.

“The system enables users to remotely monitor their home’s power consumption and control household devices (e.g., fans, lights, coffee machines, etc.),” Alvarez says. “The main system consists of an embedded gateway/web server that, aside from its ability to communicate over the Internet, is also capable of local communications over a home area wireless network.”

Alvarez catered to his interests by creating his own wireless communication protocol for the system.

“As a learning exercise, I specifically developed the communication protocol I used in the home area wireless network from scratch,” he says. “I used low-cost RF transceivers to implement the protocol. It is simple and provides just the core functionality necessary for the application.” 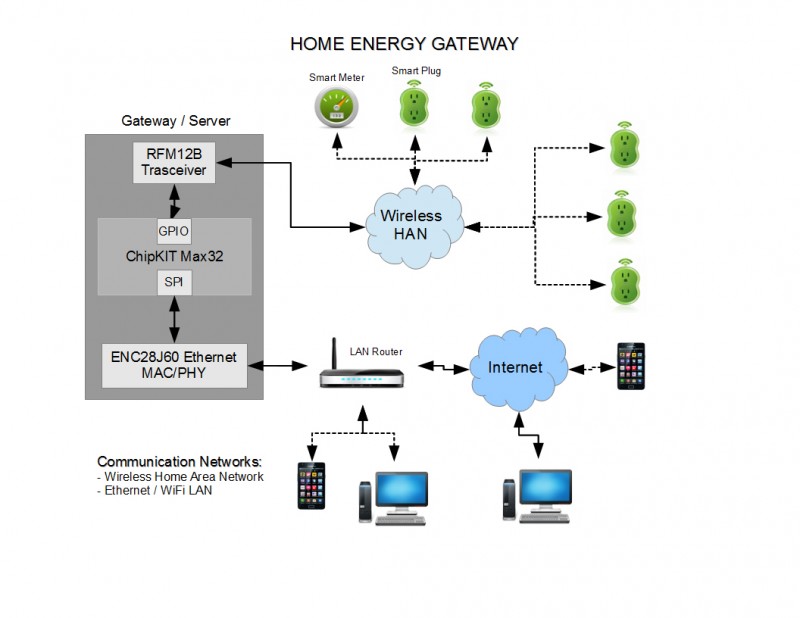 Alvarez writes about his project in the February issue of Circuit Cellar. His article concentrates on the project’s TCI/IP communications aspects and explains how they interface.

Here is his article’s overview of how the system functions and its primary hardware components:

Figure 1 shows the system’s block diagram and functional configuration. The smart meter collects the entire house’s power consumption information and sends that data every time it is requested by the gateway. In turn, the smart plugs receive commands from the gateway to turn on/off the household devices attached to them. This happens every time the user turns on/off the controls in the web control panel. 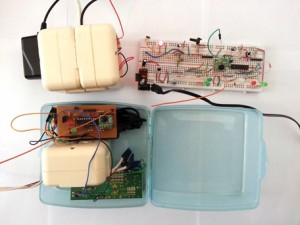 Photo 1: These are the three smart node hardware prototypes: upper left, smart plug; upper right, a second smart plug in a breadboard; and at bottom, the smart meter.

I used the simple wireless protocol (SWP) I developed for this project for all of the home area wireless network’s wireless communications. I used low-cost Hope Microelectronics 433-/868-/915-MHz RFM12B transceivers to implement the smart nodes. (see Photo 1)
The wireless network is configured to work in a star topology. The gateway assumes the role of a central coordinator or master node and the smart devices act as end devices or slave nodes that react to requests sent by the master node.

The gateway/server is implemented in hardware around a Digilent chipKIT Max32 board (see Photo 2). It uses an RFM12B transceiver to connect to the home area wireless network and a Microchip Technology ENC28J60 chip module to connect to the LAN using Ethernet.

As the name implies, the gateway makes it possible to access the home area wireless network over the LAN or even remotely over the Internet. So, the smart devices are easily accessible from a PC, tablet, or smartphone using just a web browser. To achieve this, the gateway implements the SWP for wireless communications and simultaneously uses Microchip Technology’s TCP/IP Stack to work as a web server. 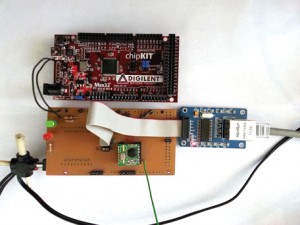 Photo 2: The Home Energy Gateway’s hardware includes a Digilent chipKIT Max32 board and a custom shield board.

Thus, the Home Energy Gateway generates and serves the control panel web page over HTTP (this page contains the individual controls to turn on/off each smart plug and at the same time shows the power consumption in the house in real-time). It also uses the wireless network to pass control data from the user to the smart plugs and to read power consumption data from the smart meter.

Alvarez says DIY home-automation enthusiasts will find his prototype inexpensive and capable. He would like to add several features to the system, including the ability to e-mail notifications and reports to users.

For more details, check out the February issue now available for download by members or single-issue purchase.