In 2012, Al Anderson, IT director at Salish Kootenai College in Pablo, MT, and his team wired the dorms and student housing units at the small tribal college with fiber and outdoor CAT 5 cable to provide reliable Internet service to students. “Our prior setup was wireless and did not provide very good service,” Anderson says.

The 25 housing units, each with a small unmanaged Ethernet switch, were daisy chained in several different paths. Anderson needed a way to monitor the links from the system’s Simple Network Management Protocol (SNMP) network monitoring software, Help/Systems’s InterMapper. He also wanted to ensure the switches installed inside the sun-exposed utility boxes wouldn’t get too hot. 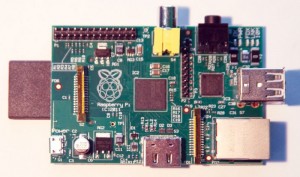 Photo 1: The Raspberry Pi is a small SBC based on an ARM processor. Its many I/O ports make it very useful for embedded devices that need a little more power than the typical 8-bit microcontroller.

His Raspberry Pi-based solution is the subject of an article appearing in Circuit Cellar’s April issue. “We chose the Raspberry Pi because it was less expensive, we had several on hand, and I wanted to see what I could do with it,” Anderson says (see Photo 1).

The article walks readers through each phase of the project:

Setting up the SBC and Linux was simple, Anderson says. “The prototype Raspberry Pi has now been running since September 2012 without any problems,” he says in his article. “It has been interesting to see how the temperature fluctuates with the time of day and the level of network activity. As budget and time permit, we will be installing more of these onto our network.”

In the following excerpt, Anderson discusses the project’s design, implementation, and OS installation and configuration. For more details on a project inspired, in part, by the desire to see what a low-cost SBC can do, read Anderson’s full article in the April issue. 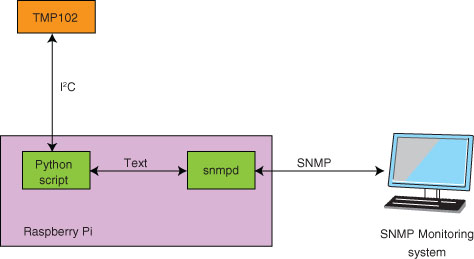 Our first step was to set up the Raspberry Pi. We started by installing the OS and the various software packages needed. Next, we wrote the Python script that queries the I2C temperature sensor. Then we configured the SNMP daemon to run the Python script when it is queried. With all that in place, we then set up the SNMP monitoring software that is configured with a custom MIB and a timed query. Finally, we modified the Raspberry Pi case to expose the temperature sensor to the air and installed the device in its permanent location.

OS INSTALLATION AND CONFIGURATION
The Raspberry Pi requires a Linux OS compiled to run on an ARM processor, which is the brain of the device, to be installed on an SD card. It does not have a hard drive. Setting up the SD card is straightforward, but you cannot simply copy the files onto the card. The OS has to be copied in such a way that the SD card has a boot sector and the Linux partitioning and file structure is properly maintained. Linux and Mac OS X users can use the dd command line utility to copy from the OS’s ISO image. Windows users can use a utility (e.g., Win32DiskImager) to accomplish the same thing. A couple of other utilities can be used to copy the OS onto the SD card, but I prefer using the command line.

A Debian-based distribution of Linux seems to be the most commonly used Linux distribution on the Raspberry Pi, with the Raspbian “wheezy” as the recommended distribution. However, for this project I chose Adafruit Learning Systems’s Occidentalis V0.2 Linux distribution because it had several hardware-hacker features rolled into the distribution, including the kernel modules for the temperature sensor. This saved me some work getting those installed and debugged.

Before you can copy the OS to the SD card, you need to download the ISO image. The Resources section of this article lists several sources including a link to the Adafruit Linux distribution. Once you have an ISO image downloaded, you can copy it to the SD card. The Resources section also includes a link to an Embedded Linux Wiki webpage, “RPi Easy SD Card Setup,” which details this copying process for several OSes.

The quick and dirty instructions are to somehow get the SD card hooked up to your computer, either using a built-in SD reader or a peripheral card reader. I used a USB attached reader. Then you need to format the card. The best format is FAT32, since it will get reformatted by the copy command anyway. Next, use your chosen method to copy the OS onto the card. On Linux or Mac OS X, the command:

will properly copy the OS onto the SD card.

You will need to change two important things in this command for your system. First, the if parameter, which is the name the in file (i.e., your ISO image) needs to match the file you downloaded. Second, the of device (i.e., the out file or our SD drive in this case) needs to match the SD card. Everything, including devices, is a file in Linux, in case you are wondering why your SD drive is considered a file. We will see this again in a bit with the I2C device. You can toast your hard drive if you put the wrong device path in here. If you are unsure about this, you may want to use a GUI utility so you don’t overwrite your hard drive.

Once the OS is copied onto the SD card, it is time to boot up the Raspberry Pi. A default username and password are available from wherever you download the OS. With our OS, the defaults are “pi” and “raspberry.” Make it your first mission to change that password and maybe even add a new account if your project is going to be in production.

Another thing you may have to change is the IP address configuration on the Ethernet interface. By default, these distributions use DHCP to obtain an address. Unless you have a need otherwise, it is best to leave that be. If you need to use a static IP address, I have included a link in the Resources section with instructions on how to do this in Linux.

To access your Raspberry Pi, hook up a local keyboard and monitor to get to a command line. Once you have the network running and you know the IP address, you can use the SSH utility to gain access via the network.

To get SNMP working on the Raspberry Pi, you need to install two Debian packages: snmpd and snmp. The snmpd package is the actual SNMP server software that will enable other devices to query for SNMP on this device. The second package, snmp, is the client. It is nice to have this installed for local troubleshooting.

We used the Debian package manager, apt-get, to install these packages. The commands also must be run as the root or superuser.

Next we issued the
sudo apt-get install snmp command, which installed the SNMP client. Issue the ps -ax | grep snmpd command to see if the snmpd daemon is running after the install. You should see something like this:

If you do not see a line similar to this, you can issue the sudo /etc/init.d/snmpd command start to start the service. Once it is running, it is time to turn your attention to the Python script that reads the temperature sensor. Configure the SNMP daemon after you get the Python script running. 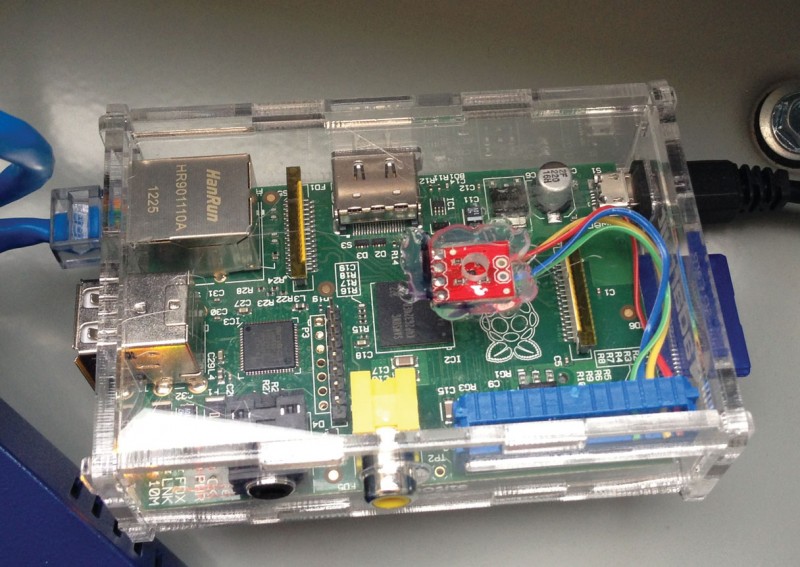 The Raspberry Pi’s final installation is shown. The clear acrylic case can be seen along with the Texas Instruments TMP102 temperature sensor, which is glued below the air hole drilled into the case. We used a modified ribbon cable to connect the various TMP102 pins to the Raspberry Pi.