The need for a bevy of equipment for building and testing presents a problem: how to deliver an adequate power supply while keeping workbench clutter to a minimum. Brian decided to tackle this classic engineering conundrum with a small, low-capacity quad bench power supply. 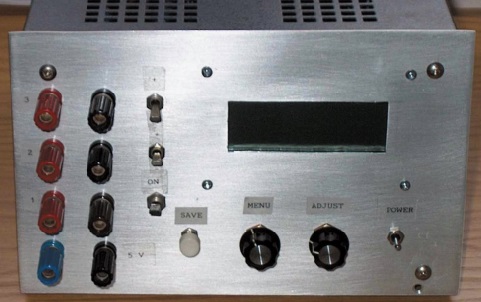 To the right of the output Johnson posts are the switches that set the polarity of the floating supplies—as well as the switch that disconnects all power supply outputs—while leaving the unit still powered up.

I hate to admit it, but my electronics bench is not a pretty sight, at least in the midst of a project anyway. Of course, I’m always in the middle of some project that, more often than not, contains two or three different projects in various stages of completion. To make matters worse, most of my projects involve microchips, which have to be programmed. Because I use ISP flash memory MCUs exclusively, it makes sense to locate a computer on my construction bench to facilitate programming and testing. To save space, I initially used my laptop’s parallel port for MCU programming. It was only a matter of time before I popped the laptop’s printer port by connecting it to a prototype circuit with errors on it.

Fixing my laptop’s printer port would have involved replacing its main board, which is an expensive proposition. Therefore, I switched over to a desktop computer (with a $20 ISA printer port board) for programming and testing purposes. The desktop, however, took up much more room on my bench.

You can’t do without lots of testing equipment, all of which takes up more bench space. Amongst my test equipment, I have several bench power supplies, which are unfortunately large because I built them with surplus power supply assemblies taken from older, unused equipment. This seemed like a good candidate for miniaturization.

At about the same time, I read a fine article by Robert Lacoste describing a high-power tracking lab power supply (“A Tracking Lab Power Supply,” Circuit Cellar 139). Although I liked many of Robert’s clever design ideas, most of my recent projects seemed to need only modest amounts of power. Therefore, I decided to design my own low-capacity bench supply that would be compact enough to fit in a small case. In this article, I’ll describe that power supply.

Even though I mentioned that my recent project’s power demands were fairly modest, I frequently needed three or more discrete voltage levels. This meant lugging out a couple of different bench supplies and wiring all of them to the circuit I was building. If the circuit required all of the power supplies to cycle on and off simultaneously, the above arrangement was extremely inconvenient. In any event, it took up too much space on my bench.

I decided that I wanted to have four discrete voltage sources available. One power supply would be ground referenced. Two additional power supplies would be floating power supplies. Each of these would have the provision to switch either the positive or negative terminal to the negative (ground) terminal of the ground-referenced supply, allowing for positive or negative output voltage. Alternately, these supplies could be left floating with respect to ground by leaving the aforementioned switch in the center position.

This arrangement allows for one positive and two positive, negative or floating voltage outputs. To round off the complement, I added Condor’s commercial 5-V, 3-A linear power supply module, which I had on hand in my junk box. Table 1 shows the capabilities of the four power supplies.

As you can see, there are four power supplies. I’ve included all of the information you need to understand their capabilities.

I had used many of these DPM modules before, so I was aware of the fact that the modules require their negative measurement terminal to float with respect to the DPM’s own power supply. I solved this problem in the past by providing the DPM module with its own independent power source. Robert solved it by designing a differential drive circuit for the DPM. Either solution, when multiplied by six, is not trivial. Add to this the fact that high-quality DPMs cost about $40 in Canada, and you’ll see why I started to consider a different solution.

Using a microcontroller-based circuit basically allows you to control the bench supply with a computer for free. I have to admit that I decided to add the commercial 5-V supply module at the last minute; therefore, I didn’t allow for the voltage or current monitoring of this particular supply.

Although there certainly is a digital component to this project, the basic power supply core is a standard analog series-pass regulator design. I borrowed a bit of this design from Robert’s lab supply circuit.

Figure 1 is the schematic for the ground-referenced supply. As you can see, a 24VCT PCB-mounted transformer provides all four necessary voltage sources. A full wave rectifier comprised of D4, D5, and C5 provides the 16 V that’s regulated down to the actual power supply output. Diodes D6, R10, C8, and Zener diode D7 provide the negative power supply needed by the op-amps. … 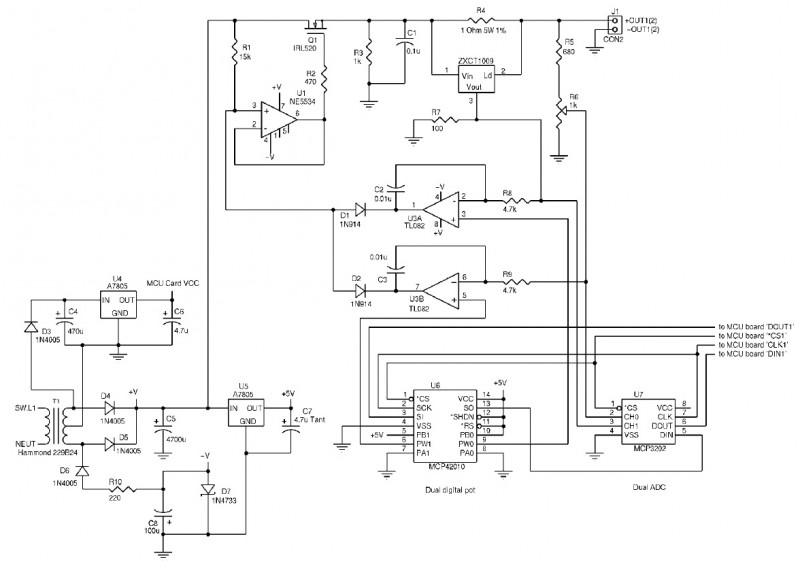 As with every other project I’ve worked on in the last two years, I chose the Atmel AVR family for the MCU. In this case, I went with the AT90S8535 for a couple of reasons. I needed 23 I/O lines to handle the three SPI channels, LCD, rotary encoders, and RS-232. This ruled out the use of smaller AVR devices. I could’ve used the slightly less expensive AT90LS8515, but I wanted to allow for the possibility of adding a temperature-sensing meter/alarm option to the circuit. The ’8535 has a 10-bit ADC function that’s suitable for this purpose; the ’8515 does not.

The ’8535 MCU has 8 KB of ISP flash memory, which is just about right for the necessary firmware. It also contains 512 bytes of EEPROM. I used a small amount of the EEPROM to store default values for the three programmable power supplies. That is to say, the power supply will power up with the same settings that existed at the time its Save Configuration push button was last pressed.

To simplify construction, I decided to use a SIMM100 SimmStick module made by Lawicel. The SIMM100 is a 3.5″ × 2.0″ PCB containing the ’8535, power supply regulator, reset function, RS-232 interface, ADC, ISP programming headers, and a 30-pin SimmStick-style bus. I’ve used this module for prototypes several times in the past, but this is the first time I’ve actually incorporated one into a finished project. …

eded to operate the three SPI channels and interface the two rotary encoders come out through the 30-pin bus. As you now know, I designed the ground-referenced power supply PCB to include space to mount the SIMM100 module, as well as the IsoLoop isolators. The SIMM100 mounts at right angles to this PCB; it’s hard-wired in place using 90° header pins. The floating power supplies share a virtually identical PCB layout apart from being smaller because of the lack of traces and circuitry associated with the SIMM100 bus and IsoLoop isolators.

The SIMM100 module has headers for the ISP programming cable and RS-232 port. I used its ADC header to run the LCD by reassigning six of the ADC port pins to general I/O pins.

When I buy in bulk, it’s inevitable that by the time I use the last item in my stock, something better has taken its place. After contacting Lawicel to request a .jpg image of the SIMM100 for this article, I was introduced to the new line of AVR modules that the company is developing.

Rather than a SimmStick-based module, the new modules are 24- and 40-pin DIP modules that are meant to replace Basic Stamps. Instead of using PIC chips/serial EEPROM and a Basic Interpreter, they implement the most powerful members of Atmel’s AVR family—the Mega chips.

The user interface I settled on consisted of a common 4 × 20 LCD panel along with two rotary encoders. One encoder is used to scroll through the various power supply parameters, and the other adjusts the selected parameter. The cost of LCDs and rotary encoders is reasonable these days. Being able to eliminate the substantial cost of six DPMs and six 10-turn potentiometers was the main reason for choosing an MCU-based design in the first place.