In the first part of this article series on Parallax Propeller-based gaming projects, I hooked up the hardware for the Hi/Lo game on a breadboard. Now I’ll write the game logic. The finished code is available here.

The power of the Propeller chip is in its multiple CPU cores. But you can do just fine with one processor, especially for a simple game like Hi/Lo. You program each of the processors in assembly or in the Parallax-invented SPIN high-level language. Assembly programs run blazingly fast directly in the CPU core. SPIN compiles to a binary format that is interpreted by the SPIN interpreter (written in assembly). The interpreter runs in the CPU core.

The CPU core is designed for speed, but it only has room for 512 instructions. The SPIN interpreter fetches your program byte by byte from shared RAM. Your code runs more slowly, but you have 32K of space to work with. I’ll use assembly in future projects, but SPIN is perfect for Hi/Lo.

A SPIN file is a collection of functions and data (shared by all functions in the file). The functions use local variables kept on a call stack. You break up your programming task into smaller functions that build on one another and call each other. You pass parameters to the functions and use the return values. It is all very similar to C programming though the syntax is different. The interpreter begins with the first function in your file no matter what you name it.

I started the project with a test “main” and the functions to control the Hi/Lo speaker, LEDs, and switches.

This function plays a tone on the speaker (Source: C. Cantrell)

The “playTone” function generates a square wave on the speaker pin. The “cnt” register is a built-in 32-bit value that increments with every system clock. I run the prop stick full out with an 80-MHz clock configuration (5M-Hz crystal with a *16 internal multiplier). The “waitcnt” instruction puts the CPU to sleep until the system clock reaches the requested value. There are two waits in the loop that generates one clock cycle. Thus the generated frequency is roughly 40 MHz/freq. I say “roughly” because each instruction takes a little time to execute. The actual generated frequency is slightly less. There are much better ways to generate a precise square wave with the propeller hardware, but this is function is easy to understand, and it works fine for the simple Hi/Lo game.

The LED display is a collection of 14 segments and two dots that are turned on or off by writing a 1 or 0 to the Propeller port pins. The program use a look-up table that defines the various segment patterns to be shown.

The look-up table is defined in a data (DAT) section in the program. The SPIN language allows you to define binary constants with a “%” prefix. You can use the underscore (“_”) anywhere in any numeric constant to make it easier to read. The comment line just above the table shows how the segments map to bit positions in the propeller’s output register.

I wrote LED functions to “drawBlank” (blank the display) and “drawHi” (show “Hi”) and “drawLo” (show “Lo”). These one-line functions are easy enough to code inline where they are used. But having the functions in distinct blocks makes the using code easier to understand and modify.

The functions to read the buttons return Boolean values: true if the switch is pressed or false if it is not. When a button is pressed, the corresponding input bit in “ina” goes to “1.” There are five buttons and five functions—one for each. There is also an “isAny” function to detect if any button is pressed.

The “splash” function calls “drawHi” and “drawLo” with a pause between.

The function attracts a player to the game. (Source: C. Cantrell)

The “pauseStopOnAnyButton” function counts up the delay and watches for “isAny”. It aborts the pause and returns true if a button is pressed. The “SPLASH_DELAY” is defined in the constant (“CON”) area of the program. I keep all “magic numbers” like delay counts and tone values in the CON area for easy tweaking.

The “playGame” function uses three helper functions: “getPlayerGuess,” “showWin,” and “showHint.” The “showWin” and “showHint” functions are just a couple of lines each and could be coded inline. Having them separate allows you to enhance the visual effects without changing the game logic code.

The “getPlayerGuess” does the real work of the game. It watches the buttons and changes the displayed number accordingly. 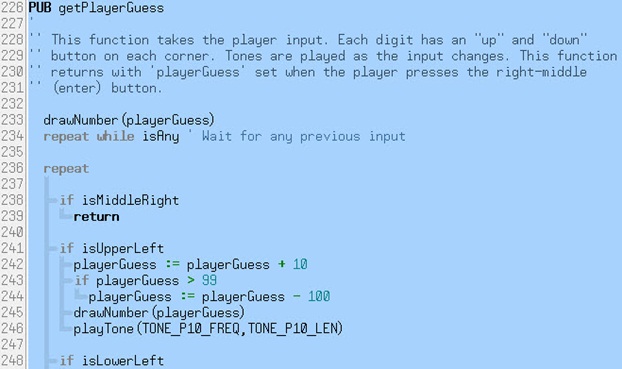 The “getPlayerGuess” function is an infinite loop with five IF checks for each button. When the middle button is pressed the function returns with the global “playerGuess” variable holding the input value. The other buttons increment or decrement the digits on the display. Each IF block checks for overflow and plays a feedback tone.

There you have it: a simple Hi Lo game. The visual and input effects are in separate functions ready to be spruced up. I bet your solution has many more bells and whistles! I look forward to reading your ideas in the comments of this blog.

Next time I’ll wrap up the Hi Lo game with a little multitasking. I’ll write parallel programs to run in two new CPU cogs to manage sound effects and the LED display.