It’s estimated that by the year 2020, more than 30 billion devices worldwide will be wirelessly connected to the IoT. While the IoT has massive implications for government and industry, individual electronics DIYers have long recognized how projects that enable wireless communication between everyday devices can solve or avert big problems for homeowners. 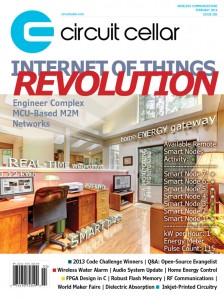 While energy use is one common priority for homeowners, another is protecting property from hidden dangers such as undetected water leaks. Devlin Gualtieri wanted a water alarm system that could integrate several wireless units signaling a single receiver. But he didn’t want to buy one designed to work with expensive home alarm systems charging monthly fees.

In this issue, Gualtieri writes about his wireless water alarm network, which has simple hardware including a Microchip Technology PIC12F675 microcontroller and water conductance sensors (i.e., interdigital electrodes) made out of copper wire wrapped around perforated board.

It’s an inexpensive and efficient approach that can be expanded. “Multiple interdigital sensors can be wired in parallel at a single alarm,” Gualtieri says. A single alarm unit can monitor multiple water sources (e.g., a hot water tank, a clothes washer, and a home heating system boiler).

Also in this issue, columnist George Novacek begins a series on wireless data links. His first article addresses the basic principles of radio communications that can be used in control systems.

Other issue highlights include advice on extending flash memory life; using C language in FPGA design; detecting capacitor dielectric absorption; a Georgia Tech researcher’s essay on the future of inkjet-printed circuitry; and an overview of the hackerspaces and enterprising designs represented at the World Maker Faire in New York.

Places for the IoT Inside Your Home