Researchers at the New Jersey Institute of Technology (NJIT) have developed a flexible battery made with carbon nanotubes that could potentially power electronic devices with flexible displays, according to an NJIT press release. 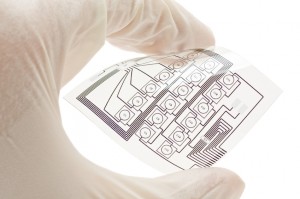 And this new battery, given its flexibility and components, can be used to power this new generation of bendable electronics. The battery is made from carbon nanotubes and micro-particles that serve as active components—similar to those found in conventional batteries. It is designed, though, to contain the electro-active ingredients while remaining flexible.

“This battery can be made as small as a pinhead or as large as a carpet in your living room,” says Somenath Mitra, of Bridgewater, a professor of chemistry and environmental science whose research group invented the battery. “So its applications are endless. You can place a rolled-up battery in the trunk of your electric car and have it power the vehicle.”

A patent application on the battery has been filed, and the battery will be featured in an upcoming issue of “Advanced Materials.”  Mitra developed the new technology at NJIT with assistance from Zhiqian Wang, of Kearney, a doctoral student in chemistry.

The battery has another revolutionary potential, in that it could be fabricated at home by consumers.  All one would need to make the battery is a kit composed of electrode paste and a laminating machine. One would coat two plastic sheets with the electrode paste, place a plastic separator between the sheets and then laminate the assembly. The battery assembly would function in the same way as a double-A or a triple-A battery.

“We have been experimenting with carbon nanotubes and other leading technologies for many years at NJIT,” says Mitra, “and it’s exciting to apply leading-edge technologies to create a flexible battery that has myriad consumer applications.”