Antenova recently announced three new flexible printed circuit antennas—Mitis (SRFL026), Moseni (SRFL029), and Zhengi (SRFC015)—to cover the 3G, 4G, and LTE bands. The flexible antennas—which belong to Antenova’s flexiiANT range of antennas—offer options for all of the world’s 4G and LTE bands. You also have a choice of antenna shape and size. You can fold the flexible FPC antennas to fit inside small electronic devices. You can position them vertically, horizontally, or co-planar to the PCB. and are ideal for use in applications where there may not be room for an SMD antenna. 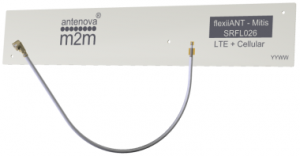 The antennas come with an IPEX MHF (UFL) cable in a choice of three lengths for easy connection to a wireless module, making them effectively plug-and-play antennas, particularly as they can be integrated without matching. Each one has a peel-back self-adhesive backing that enables you to position it in a variety of  designs.

The Mitis, Moseni and Zhengi antennas are designed for a wide variety of applications, such as smart meters, remote monitoring, M2M, and IoT devices.