Microchip Technology announced at the Embedded World conference in Germany the MM7150 Motion Module, which combines Microchip’s SSC7150 motion co-processor combined with nine-axis sensors. Included in compact form factor are an accelerometer, magnetometer, and gyroscope.  With a simple I2C connection to most MCUs/MPUs, embedded applications and Internet of Things (IoT) systems can easily tap into the module’s advanced motion and position data. 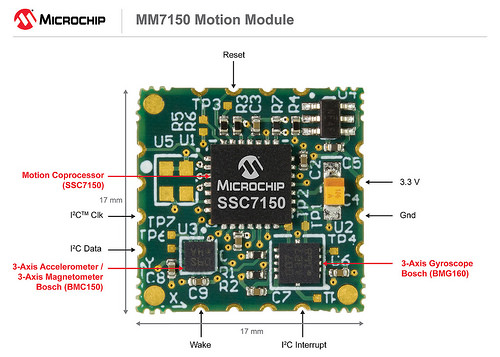 The single-sided MM7150 motion module is easily soldered down during the manufacturing process. You can develop motion applications for a variety of products with Microchip’s MM7150 PICtail Plus Daughter Board.  The MM7150 Motion Module is well suited for a wide range of applications: embedded (e.g., portable devices and robotics), industrial (e.g., commercial trucks, industrial automation, and patient tracking), and consumer electronics (e.g., IoT, remote controls, and wearable devices).

The MM7150 is supported by the MM7150 PICtail Plus Daughter Board (AC243007, $50) that plugs directly  into Microchip’s Explorer 16 Development Board (DM240001, $129) to enable quick and easy prototyping utilizing Microchip’s extensive installed base of PIC microcontrollers.