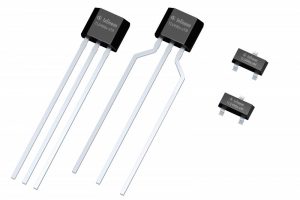 The TLx496x Hall sensors consume no more than 1.6 mA. In addition, they have an integrated Hall element, a voltage regulator (to power the Hall element and the active circuits), choppers (ensure that the temperature remains stable), an oscillator, and an output driver.

The TLE496x-xM series is well suited for automotive applications (e.g., power windows and sunroofs, trunk locks, and windshield wipers) with an operating voltage of 3 to 5.5 V. The TLI496x-xM series units function like the TLE496x-xM units, but it is specified for a temperature range of –40° to 125°C and is JESD47 qualified. The TLI496x-xM is used in BLDC motors in e-bikes and fans in PCs and in electric drives in building automation. The TLV496x-xTA/B series was specifically developed for the cost-effective, contactless positioning. Typical applications are BLDC motors in home appliances (e.g., dishwashers), compressors in air-conditioners, and more. Despite the pressure to cut costs, these applications need very precise Hall latches or Hall switches (unipolar/bipolar) for temperatures ranging from –40 °C to 125 °C. The TLV496x-xTA/B versions have a power consumption of 1.6 mA and an ESD protection up to 4 kVH Human Body Model (HBM). The output has overcurrent protection and automatically switches off at high temperatures.