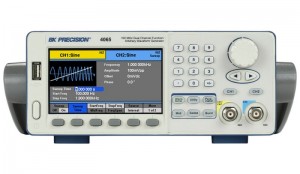 Featuring an advanced pulse generator and high-performance 512k-point arbitrary waveform generator on one channel, these instruments are ideal for use in applications requiring high signal fidelity with extensive modulation and arbitrary waveform capabilities at a value price point.

Unique to the 4060 Series are its advanced pulse generation capabilities. The instruments can generate pulses with low jitter less than 100 ps and output 12-ns width pulses at frequencies as low as 0.1 Hz–a feature not typically found in DDS generators. Rise and fall times are also adjustable within a large range (e.g. users can output pulses with 6 ns rise times combined with 6 s fall times).

Equipped with a high performance 14-bit, 500 Msps, 512k-point arbitrary waveform generator, the 4060 Series provides users 36 built-in arbitrary waveforms and the ability to create and load up to 32 custom arbitrary waveforms using the included waveform editing software via standard USB interface on the rear. A front panel USB host port is available for users to conveniently save waveforms and setups on a USB flash drive or to connect the optional USB-to-GPIB adapter for GPIB connectivity.