Dave Erickson built his first multi-zone audio system in the early 1990s using C microprocessor code he developed on Freescale MC68HC11 microprocessors. The system has been an important part of his home.

“I used this system for more than 15 years and was satisfied with its ability to send different sounds to the different rooms in my house as well as the basement and the deck,” he says. “But the system needed an upgrade.”

In Circuit Cellar’s January and February issues, Erickson describes how he upgraded the eight-zone system, which uses microprocessor-controlled analog circuitry. In the end, his project not only improved his home audio experience, it also won second place in a 2011 STMicroelectronics design contest.

Several system components needed updating, including the IR remote, graphic LCD, and microprocessor. “IR remotes went obsolete, so the IR codes needed to change,” Erickson says. “The system was 90% hand-wired and pretty messy. The LCD and several other parts became obsolete and the C development tools had expired. Processors had evolved to include flash memory and development tools evolved beyond the old burn-and-pray method.”

“My goal was to build a modern, smaller, cleaner, and more efficient system,” he says. “I decided to upgrade it with a recent processor and LCD and to use real PC boards.” 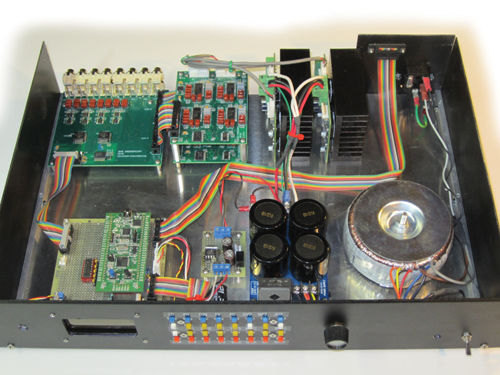 Photo 1: Clockwise from the upper left, the whole-house system includes the crosspoint board, two quad preamplifiers, two two-zone stereo amplifiers, an AC transformer, power supplies, and the CPU board with the STMicroelectronics STM32VLDISCOVERY board.

“STMicroelectronics’s excellent libraries and examples helped me get the complex ARM Cortex-M3 peripherals working quickly,” he says. “Choosing the STM32F100 processor was a bit of overkill, but I hoped to later use it to add future capabilities (e.g., a web page and Ethernet control) and possibly even a simple music server and audio streaming.”

In Part 1 of the series, Erickson explains the design’s audio sections, including the crosspoint board, quad preamplifiers, modular audio amplifiers, and packaging. He also addresses challenges along the way.

Erickson’s Part 1 provides the following overview of the system, including its “analog heart”—the crosspoint board:

Figure 1 shows the system design including the power supplies, front-panel controls, and the audio and CPU boards. The system is modular, so there is flexibility in the front-panel controls and the number of channels and amplifiers. My goal was to fit it all into one 19”, 2U (3.5”) high rack enclosure.

The CPU board is based on a STM32F100 module containing a Cortex-M3-based processor and a USB programming interface. The CPU receives commands from a front-panel keypad, an IR remote control, an encoder knob, RS-232, and external keypads for each zone. It displays its status on a graphic LCD and controls the audio circuitry on the crosspoint and two quad preamplifier boards. 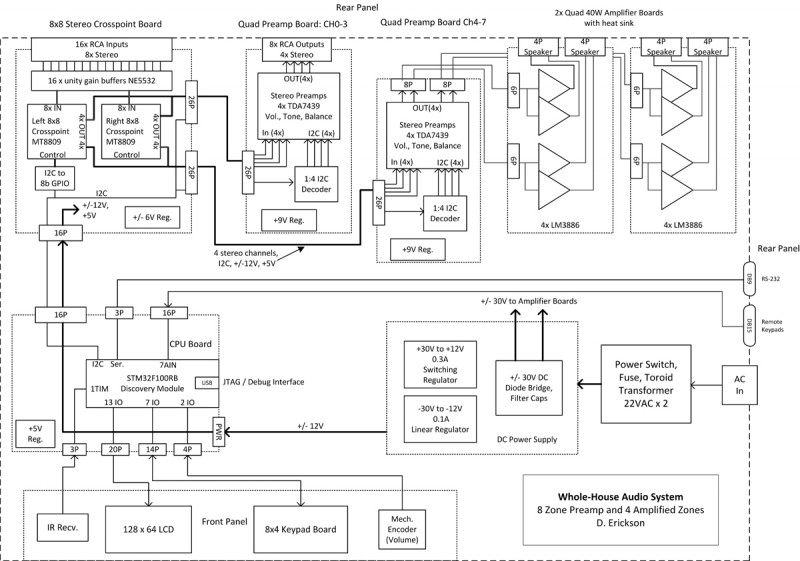 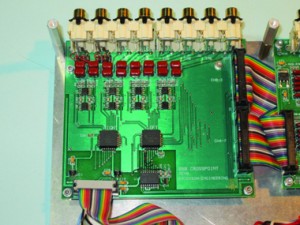 Photo 2: The crosspoint board shows the RCA input jacks (top), ribbon cable connections to the quad preamplifiers (right), and control and power cable from the CPU (bottom). Rev0 has a few black wires (lower center).

DIYers dealing with signal leakage issues in their projects may learn something from Erickson’s approach to achieving low channel-to-channel crosstalk and no audible digital crosstalk. “The low crosstalk requirement is to prevent loud music in one zone from disturbing quiet passages in another,” he says.

In Part 1, Erickson explains the crosspoint and his “grounding/guarding” approach to transmitting high-quality audio, power, and logic control signals on the same cable:

The crosspoint receives digital control from the CPU board, receives external audio signals, and distributes audio signals to the preamplifier boards and then on to the amplifiers. It was convenient to use this board to distribute the control signals and the power supply voltages to the preamplifier channels. I used 0.1” dual-row ribbon cables to simplify the wiring. These are low-cost and easy to build.

To transmit high-quality audio along with power and logic control signals on the same cable, it is important to use a lot of grounds. Two 34-pin cables each connect to a quad preamplifier board. In each of these cables, four channels of stereo audio are sent with alternating signals and grounds. The alternating grounds act as electric field “guards” to reduce crosstalk. There are just two active logic signals: I2C clock and data. Power supply voltages (±12 and 5 V) are also sent to the preamplifiers with multiple grounds to carry the return currents.

I used a similar grounding/guarding approach throughout the design to minimize crosstalk, both from channel to channel and from digital to analog. On the two-layer boards, I used ground planes on the bottom layer. Grounded guard traces or ground planes are used on the top layer. These measures minimize the capacitance between analog traces and thus minimize crosstalk. The digital and I2C signals are physically separated from analog signals. Where they need to be run nearby, they are separated by ground planes or guard traces.

To find out more about how Erickson upgraded his audio system, download the January issue (now available online) and the upcoming February issue. In Part 2, Erickson focuses on his improved system’s digital CPU, the controls, and future plans.