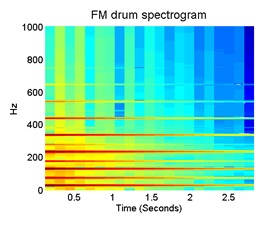 Check out the spectrogram for two FM notes produced by FM modulation. Red indicates higher energy at a given time and frequency.

Cornell University senior lecturer Bruce Land had two reasons for developing an Atmel AVR micrcontroller-based music box. One, he wanted to present synthesis/sequencing algorithms to his students. And two, he wanted the challenge of creating an interactive music box. Interactive audio is becoming an increasingly popular topic among engineers and designers, as we recently reported.

Traditional music boxes play one or two tunes very well, but are not very interactive. Put differently, they have a high quality of synthesis, but a fixed-pattern note sequencer and fixed tonal quality. I wanted to build a device which would play an interesting music-like note sequence, which constantly changed and evolved, with settable timbre, tempo, and beat… To synthesize nice sounding musical notes you need to control spectral content of the note, the rise time (attack), fall time (decay), and the change in spectral content during attack and decay.  Also it is nice to have at least two independent musical voices. And all of this has to be done using the modest arithmetic capability of an 8-bit microcontroller.

Land’s students subsequently used the music box for other projects, such as an auto-composing piano, as shown in the following video.