Anyone can easily order a pedometer or GPS sports watch on the Internet. But engineers like challenges, right? With the right parts and a little knowhow, you can engineer your own microcontroller-based wireless Bluetooth pedometer and pace tracker.

In the article, “Run With It” (Circuit Cellar 203, December 2014), Ellen Chuang and Julie Wang explain how they built an Atmel ATmega1284P microcontroller-based wireless pedometer and pace tracker. They wrote:

There’s a simple question most runners, walkers, and joggers ask themselves: How fast am I going? There are various tools for measuring pace, including step counters, GPS units, and smartphone applications. Pedometers are common tools for tracking physical activity. However, pedometers are typically either self-contained units that are out of sight and out of mind or expensive products like the FitBit and Nike+. So, for our culminating design project for Cornell University’s ECE 4760 Microcontrollers course, we decided to create a low-budget wireless pedometer and pace tracker. 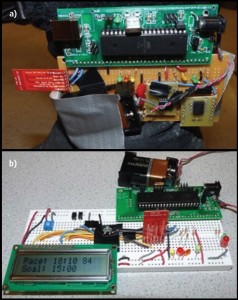 The wireless pedometer includes a foot module (a) and a wrist module (b).

Chuang and Wang’s design is notable because they enabled it with Bluetooth so they could connect it with other Bluetooth devices. In addition, they separated the user interface from the measurement unit.

Our system contains two separate modules: a foot-mounted module that captures acceleration data and a wrist-mounted module with a user interface. The foot module captures your acceleration data, lightly processes it to find values of interest, and sends the data over Bluetooth to the wrist module. The wrist module then further processes the information to determine if a step has occurred. The wrist module also handles user input and displaying information on an LCD.

To use the device, the foot unit is strapped on your lower leg and the wrist unit is either strapped to your wrist or held in your hand. At power-up, the units automatically pair over a Bluetooth link. The wrist unit powers up in Configuration mode, which enables you to use the two push buttons to adjust your stride length and also your desired pace in minutes per mile. You are first prompted for your stride length—the average length of one step—and then the targeted speed in minutes per mile. The Enter button enables you to confirm the parameters, exit Configuration mode, and enter into Pace Display mode. In Pace Display mode, the LCD displays the cumulative number of steps, your calculated pace, and your desired pace. At any point, you can reenter Configuration mode by toggling a switch on the wrist module.

Both modules contain an Atmel ATmega1284P microcontroller and an HC-05 Bluetooth master/slave module.

The foot unit contains a 1.5-g, single-axis Freescale Semiconductor MMA2260D accelerometer orientated with its positive measurement axis pointed away from the center of the Earth. We’ll refer to this direction as the z-axis. The analog data coming from the accelerometer is very noisy. To filter out the excessive noise, the accelerometer data passes through a low-pass filter with a cutoff frequency around 33 Hz using a 10-kΩ resistor and 470-nF capacitor. Human stride frequency typically falls between 185 and 200 strides per minute, or around 3.33 Hz. In order to capture this frequency, as well as higher frequency signals that correspond to other foot movements, we set the low-pass filter’s cutoff frequency to 33 Hertz. Additionally, to fully utilize the internal ADC’s 10-bit range, we dropped the voltage across a 20-kΩ resistor… 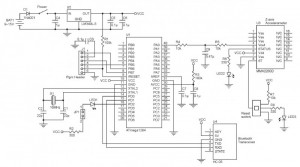 This is the foot unit. We used MAX233/RS-232 for debugging purposes and not for the final foot module.

The wrist unit includes a 16 × 2 LCD a number of user input buttons/switches, status-linked LEDs, and a Bluetooth transceiver (see Figure 2). The three buttons and switch are used in Configuration mode. Additionally, we included the following LEDs: a red LED on the board that toggles every time a step is detected; a yellow LED that toggles every time a packet is received via Bluetooth; and a green “keep alive” LED. The software on the microcontroller manages all of these tasks, which we cover in the next section.